Toum Is the Garlicky Eggless Mayo That Goes With E… 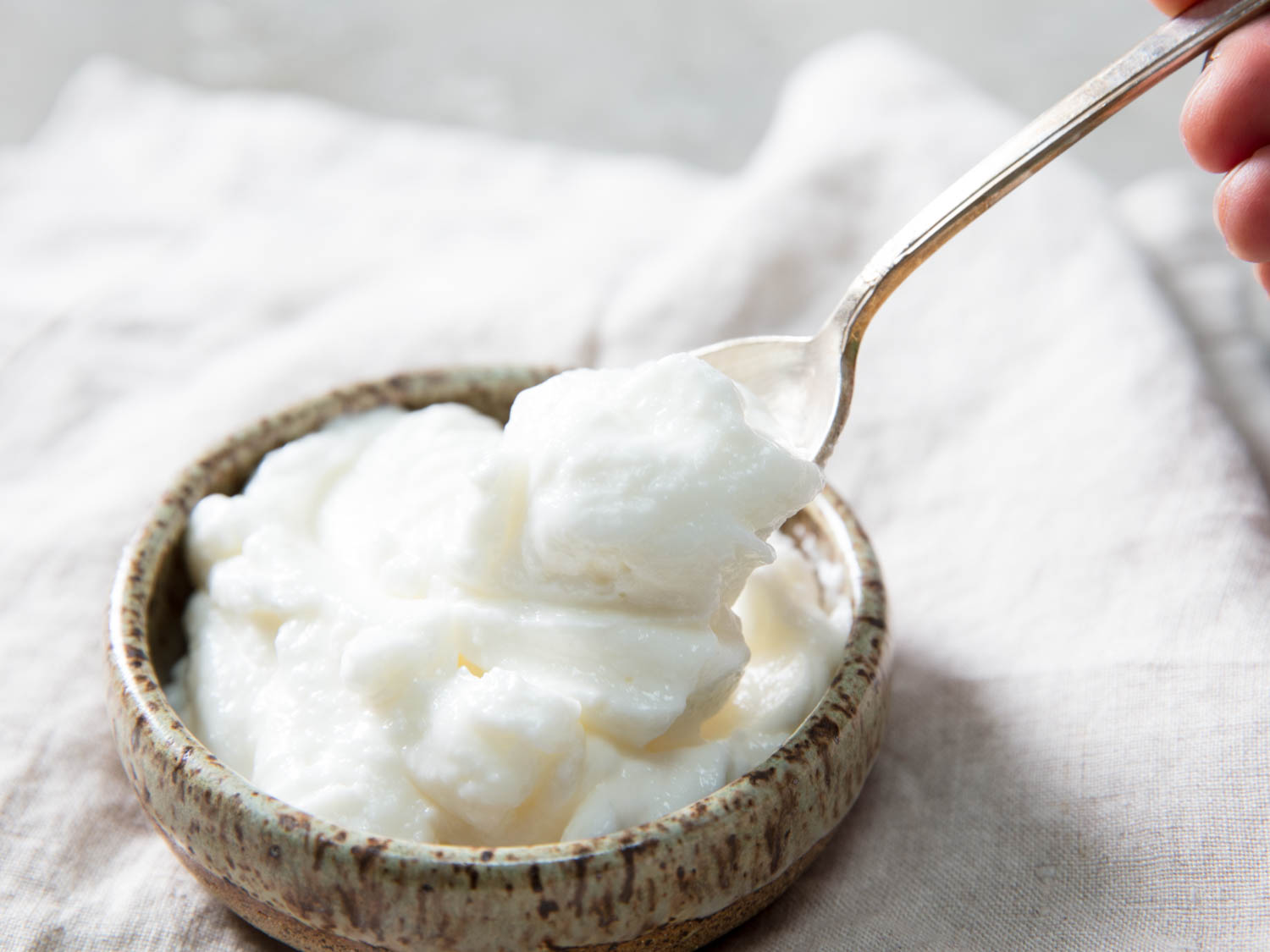 Whenever my husband and I order delivery from our favorite Lebanese place, the center of the meal isn’t the chicken shawarma or the mixed grill for two—it’s the potent garlic sauce, toum. Despite my desperate messages for extra toum, they never pack more than three 2-ounce containers of the stuff. I carefully ration the precious substance, but my husband mindlessly finishes his tub and a half and descends onto my share, leaving me forced to re-calibrate each of my smears and paw hysterically at empty containers.

Thankfully, toum is pretty easy to make and stays fresh in the fridge for a month, so there’s no reason not to always have a surplus. Ever since realizing this, I’ve been able to focus on more important things during dinner—like constructing the perfect bite of shish tawook, charred onion, and pickles on my fork.

This gutsy spread is a staple of Lebanese cuisine and more than just another condiment. It’s great for stirring into soups and pasta, marinating chicken, and tossing with roasted vegetables; it adds an energetic punch of garlic to anything without the hassle of daily peeling and mincing. It’s also a pungent vegan alternative to mayo, and serves to perk up any sandwich. Toum has become a staple in my fridge and, since it requires only four ingredients and a food processor to make, there’s nothing stopping you from also living beyond the limits of a few two-ounce containers. 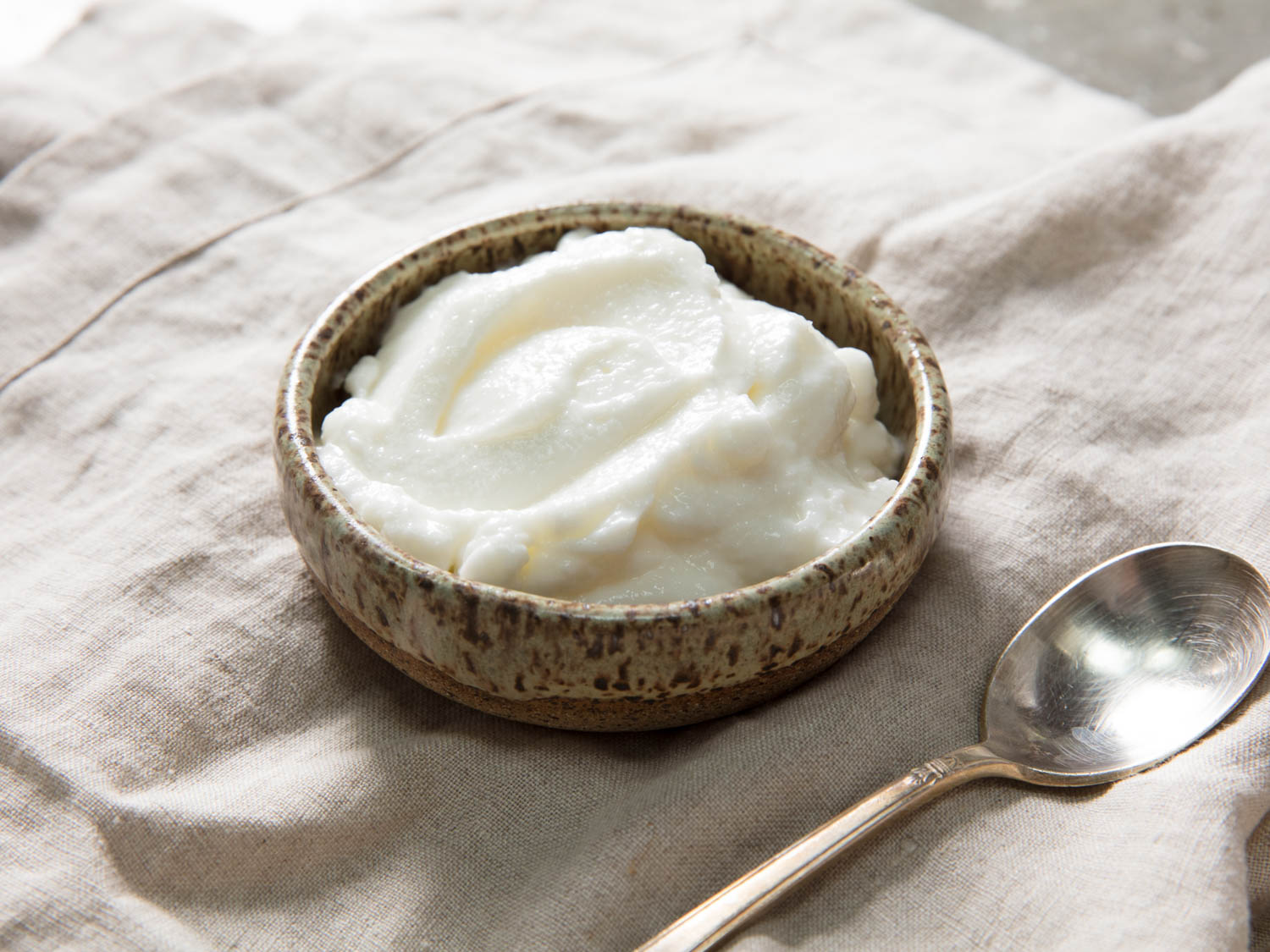 Toum is essentially a mayonnaise but stabilized with garlic instead of egg. Just like mayo, toum is an emulsion of oil into water made possible with the help of a third-party emulsifier. An emulsion always involves two incompatible liquids that are brought together by dispersing one into tiny droplets suspended throughout the other. This can be done with vigorous shaking and agitation, just like whisking oil into a vinaigrette, but without an emulsifier, the coupling is only temporary. Emulsifiers and stabilizers help these droplets stay dispersed by coating each and reducing the surface tension, preventing them from coalescing.

Mayo is such a stable emulsion because both the lecithin found in egg whites and the proteins in egg yolk are some of the most powerful emulsifiers around. One egg is capable of emulsifying one gallon of oil, resulting in a stiff and spreadable sauce. A properly made toum will be just as thick and densely packed with billions of oil droplets, but it’s all held together with the far less stable proteins and pulverized plant tissues of garlic. This makes bringing toum together a more delicate process than mayo, but with some patience, you can easily avoid pitfalls. 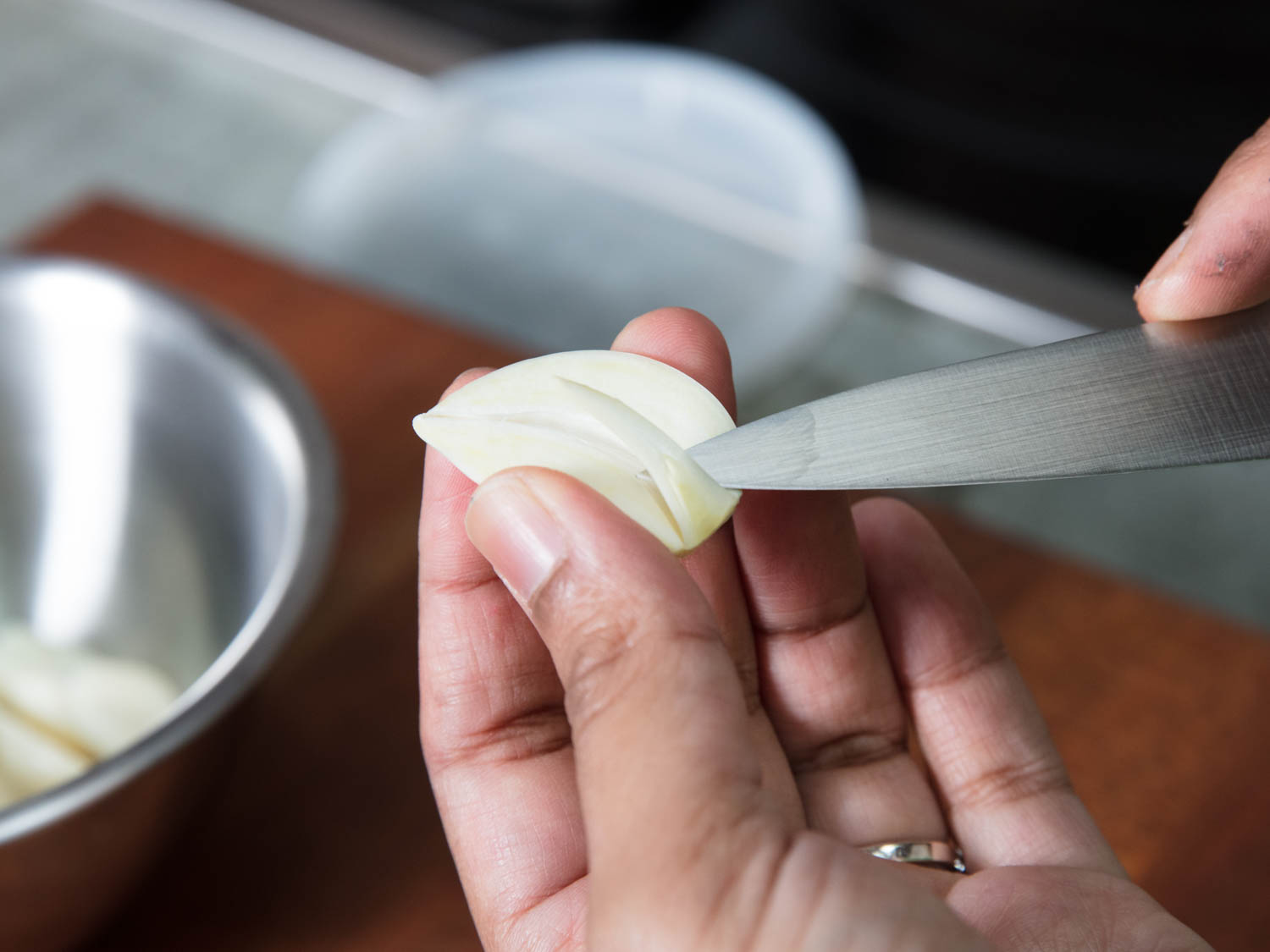 This first step is to make a smooth and fluffy garlic paste. Start with the freshest garlic for the most flavorful toum. Pre-peeled cloves sold in bulk lose much of their pungency, while old sprouting heads of garlic can be bitter and harsh. Look for firm, tight heads with no signs of bruising or sprouting. After peeling the cloves I always split them in half lengthwise and remove the germ. The little sprout in the center can leave a noticeable sharpness in raw applications.

I process the cloves in a food processor with kosher salt for some added friction. Initially, the chopped garlic will want to spray along the sides of the bowl, so you have to frequently stop to scrape down the sides, pulsing until the garlic is completely pureed. The garlic needs to be fully broken down in order for the proteins and stabilizers to be released from within its cell walls.

Once the garlic is smooth, I blend in only some of the fresh lemon juice. With mayo, all of the liquid can be added at the start because the egg is such a strong emulsifier. But because garlic is a weaker as an emulsifier, we’ll need all the help we can get, and keeping the paste thick creates more drag on the oil droplets, helping to keep them apart. 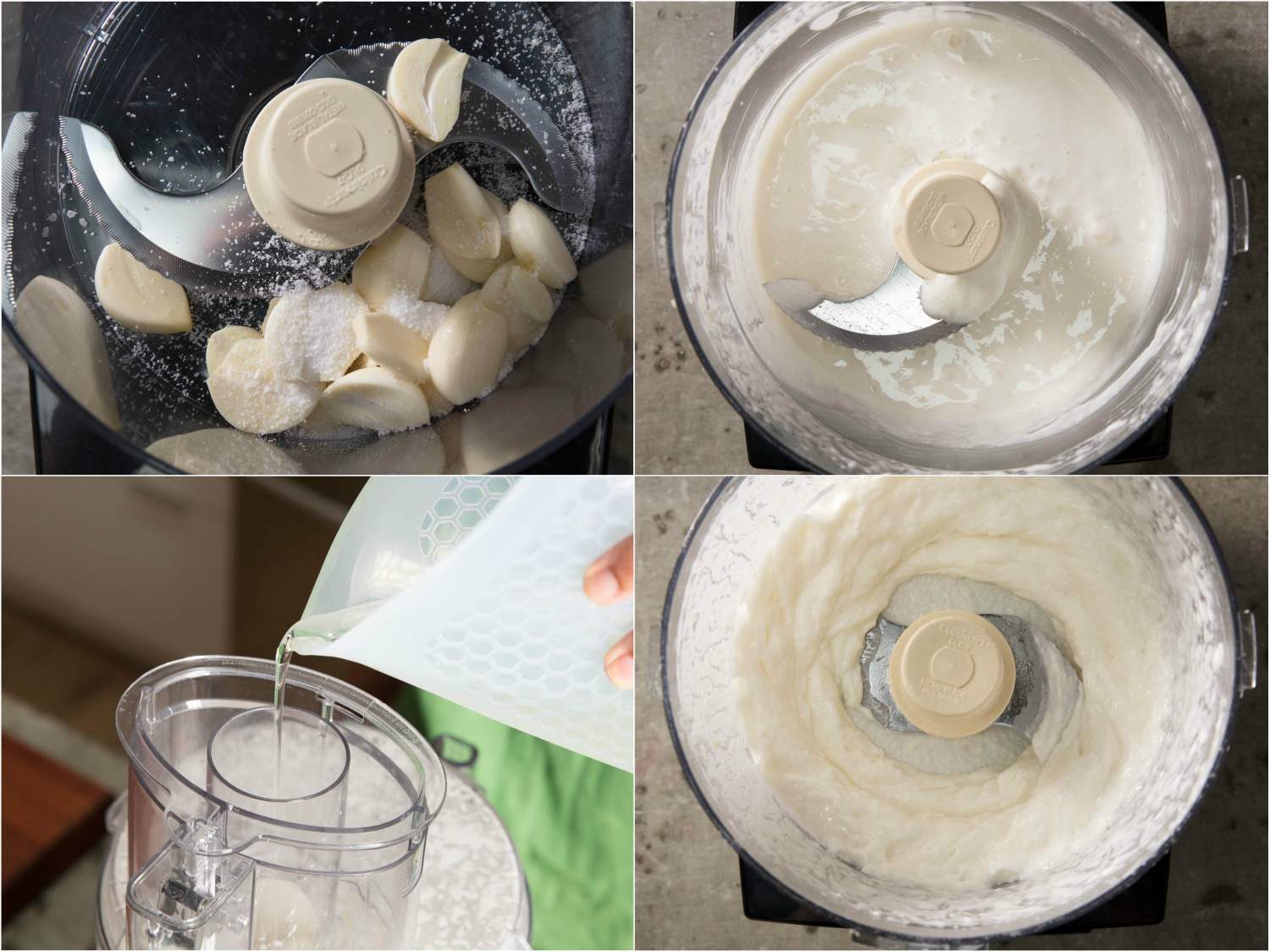 Next, I very slowly add oil in a thin stream. Adding the oil too quickly will flip the emulsion inside-out, dispersing water droplets into the oil and resulting in a greasy sauce, so it’s important to take it slow. I interrupt the oil stream after each half cup with spoonfuls of lemon juice and water. This prevents overcrowding the liquid phase with too many droplets of oil and breaking the emulsion. Continuing this process, alternating with oil and water, will yield a fluffy, thick, and stable garlic sauce. Add more oil for a thicker and milder spread or less for a more pungent and free-flowing sauce.

Sometimes, even after delicately drizzling in oil and patiently making a garlic paste, this fussy sauce will still break, perhaps because the food processor overheated the toum or the garlic was old and dry. Don’t worry, you can harness the emulsifying powers of an egg white to bring it back together. Although this isn’t a traditional toum, it will still be delicious and creamy. Just combine one egg white along with a one-quarter cup of the broken emulsion and process until fluffy before slowing pouring in the rest.

Stocked with homemade toum, you’ll never be left to suffer the whims of miserly take-out portions or greedy husbands again.