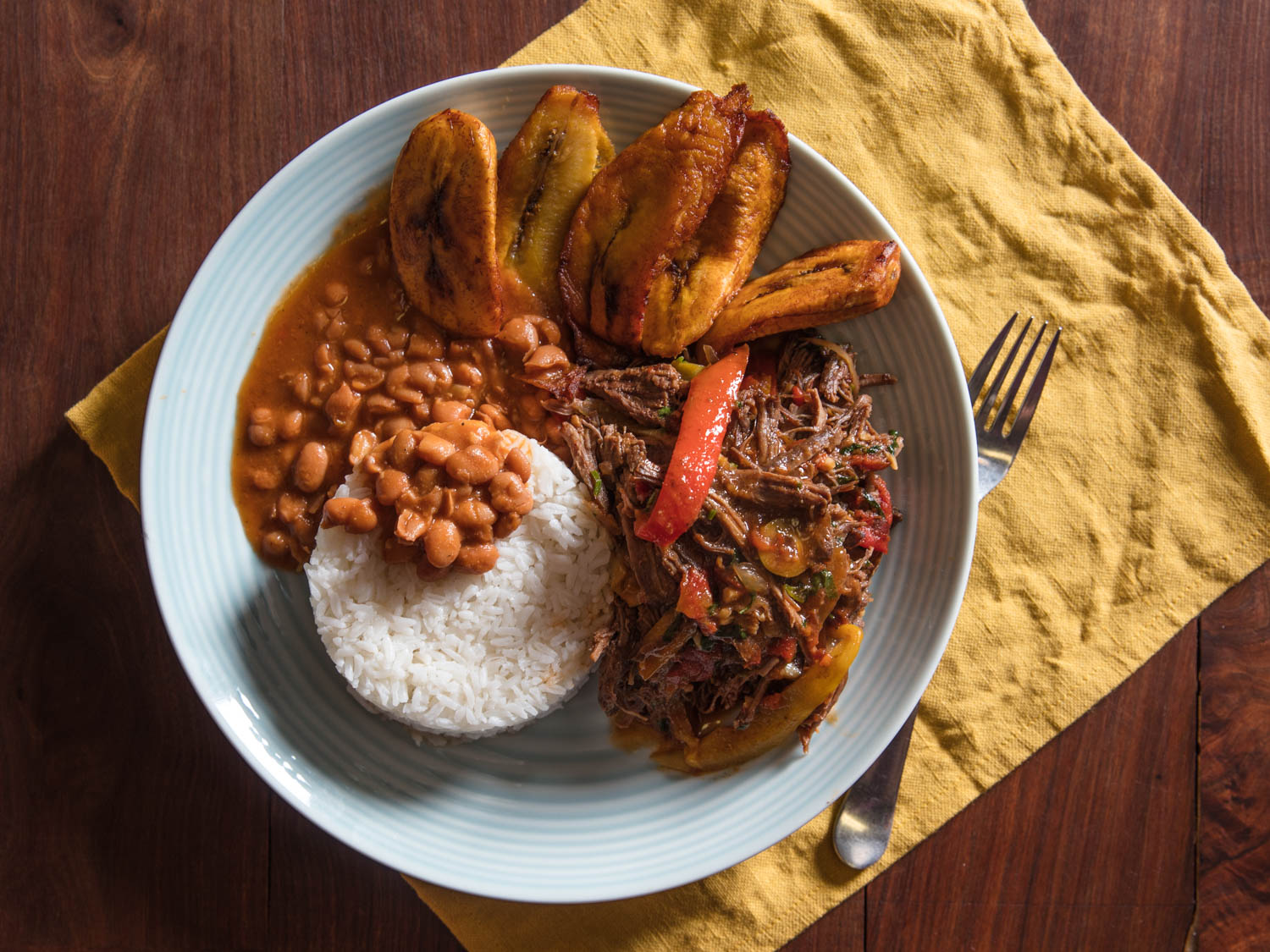 Is there such a thing as too much fun? Too much wonder? Too much euphoria? What about too much flavor? It’s easy to assume you can’t have too much of a good thing, but with flavor, at least, that’s an idea that can lead you straight off a cliff.

Several years ago, I dubbed a phenomenon that I’d been observing in the restaurant world the “Flavor Arms Race.” In a never-ending attempt to one-up all the recipes that had come before, chefs were throwing more and more flavor at a dish. More salt, more acid, more funk, more umami. Everyone is unleashing umami “bombs” left and right these days, a word choice that speaks to the assault our tongues are sometimes under. A simple roast chicken seasoned with salt and pepper gets a fistful of herbs shoved in it, then 40 cloves of garlic. Eventually, we dump fish sauce and lime juice on top and claim victory. Maybe the result is delicious, but maybe we’re at risk of losing sight of the chicken in the process.

This is the question I wrestled with as I worked on my own recipe for ropa vieja, the Cuban dish of tender shredded beef in a sauce with tomatoes, onions, and peppers. I started my testing by making the dish the way most recipes say to: simmering the beef in water with aromatic vegetables, then making a quick sauce of onions, peppers, and tomatoes on the side. When the beef is tender, you take it out of its poaching broth, shred it, and add it to the sauce with just enough of the broth to moisten things up.

When made with that method, the dish has a lighter, sweeter, and more delicate flavor than one might expect from such a hearty-looking beef stew. That’s largely due to the fact that it’s not really a stew, at least not in the traditional sense. The meat isn’t cooked with the liquid and vegetables that it’s going to be served with—it’s poached, shredded, and then bathed in a sauce.

What I had to decide was whether this was an approach that needed to be changed. Was it a mistake to poach the beef separately, then not use most of that beefy broth? Could I switch to a more flavorful cut of beef? And would smacking the dish with some umami bombs improve it?

The result is a recipe that strikes a balance between capturing as much built-in flavor as possible, while not straying too far from the spirit of the dish simply because we can. This is a ropa vieja that’s as rich and beefy as it should be, without going for the nuclear option. 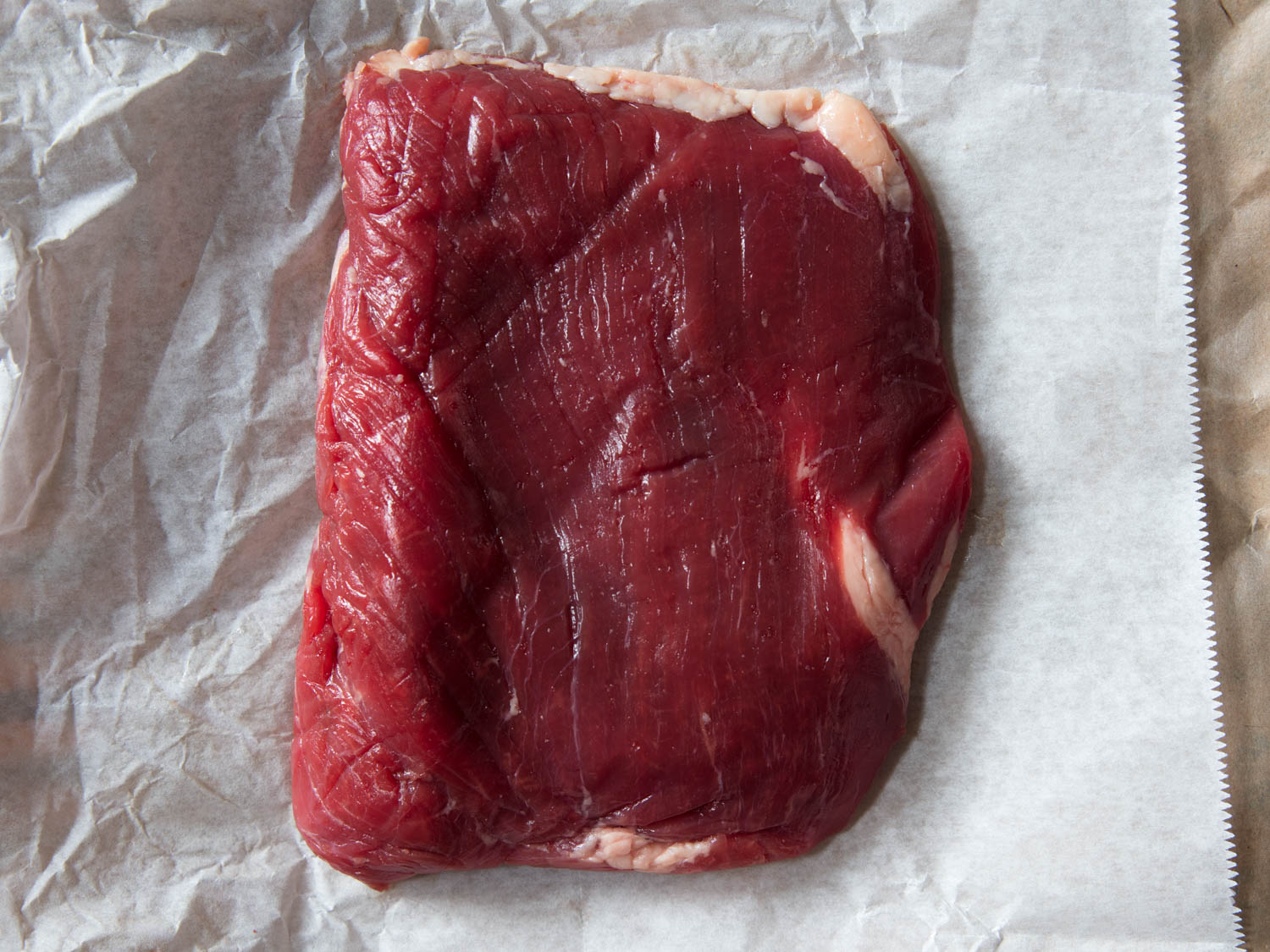 You might not think lean flank steak would be the best choice of beef for a long-cooked stew, but ropa vieja proves otherwise.

Ropa vieja is usually made with flank steak, a lean cut with long, thick strands of muscle fiber that can quickly dry out when overcooked. It’s at its best when briefly seared, then sliced thinly across the grain to minimize the chewiness of those fibers. The preparatory approach for ropa vieja includes neither of those steps. Instead, it’s the opposite: The beef is cooked until well-done, and the fibers are then shredded so that they’re long and whole (hence the dish’s name, which translates as “old clothes”).

On its face, this seems like an absolutely terrible idea. Why not switch to a cut marbled with collagen and fat, one that’s better suited to long cooking? Well, you could. You could use skirt steak, or, better yet, brisket, which has long muscle fibers similar to flank. Or go straight for the kill with a truly stew-worthy cut, like beef chuck or short ribs.

The truth, though, is that you don’t need to. I wouldn’t object to a ropa vieja made with brisket, but it’s not a necessary improvement, and the reason has everything to do with the fact that the recipe has you shred the beef.

Muscle fibers contract and squeeze out moisture as they cook; by the time a piece of meat is well-done, much of its juices have been pushed out. Cuts that are high in fat and collagen are able to mask this effect, thanks to the way fat melts and coats the meat and collagen breaks down into tender gelatin. It’s an illusion of sorts, with the fat and gelatin obscuring the loss of water.

With ropa vieja, though, the muscle fibers are pulled apart into thin strands, each of which is then coated in the sauce. The effect is the same as what you get with fat and collagen, only it comes from the sauce here. It works, with those long muscle fibers of flank steak acting like strands on a mop, soaking up all the juices and holding on to them. Switching to cuts with shorter muscle strands undermines this effect, while fatty cuts will just produce a greasier stew that needs more skimming.

Classic flank, as it turns out, does the job perfectly well here.

The other big consideration is whether to continue with the two-pot approach to the dish by simmering the steak in water first, then mixing it separately with the sauce ingredients, or to approach it more like a classic stew by doing it all in one pot. The original method yields a lighter, sweeter, and simpler flavor—all qualities that can be good when done right. In this case, though, I just couldn’t get past the inefficiency of that two-pot process. It may make sense when you’re using up leftovers (which is one explanation that I came across of the origin of the dish), but when you’re cooking from scratch, there’s little to lose and a lot to gain by using a more classic stew technique—not least of which is the ability to get all of that beef flavor into the pot and keep it there.

My revised method goes like this: First, I sear the flank steak in a Dutch oven, which allows me to develop a deeper, more complex flavor through the Maillard browning reaction. The good news here is that since the steak is left whole (or, at least, cut just small enough to arrange all the pieces in the pot in one or two batches), we don’t sacrifice much in terms of texture, something that does happen when you brown, and thus dehydrate, the surfaces of smaller pieces of meat. Then I take the beef out and set it aside. 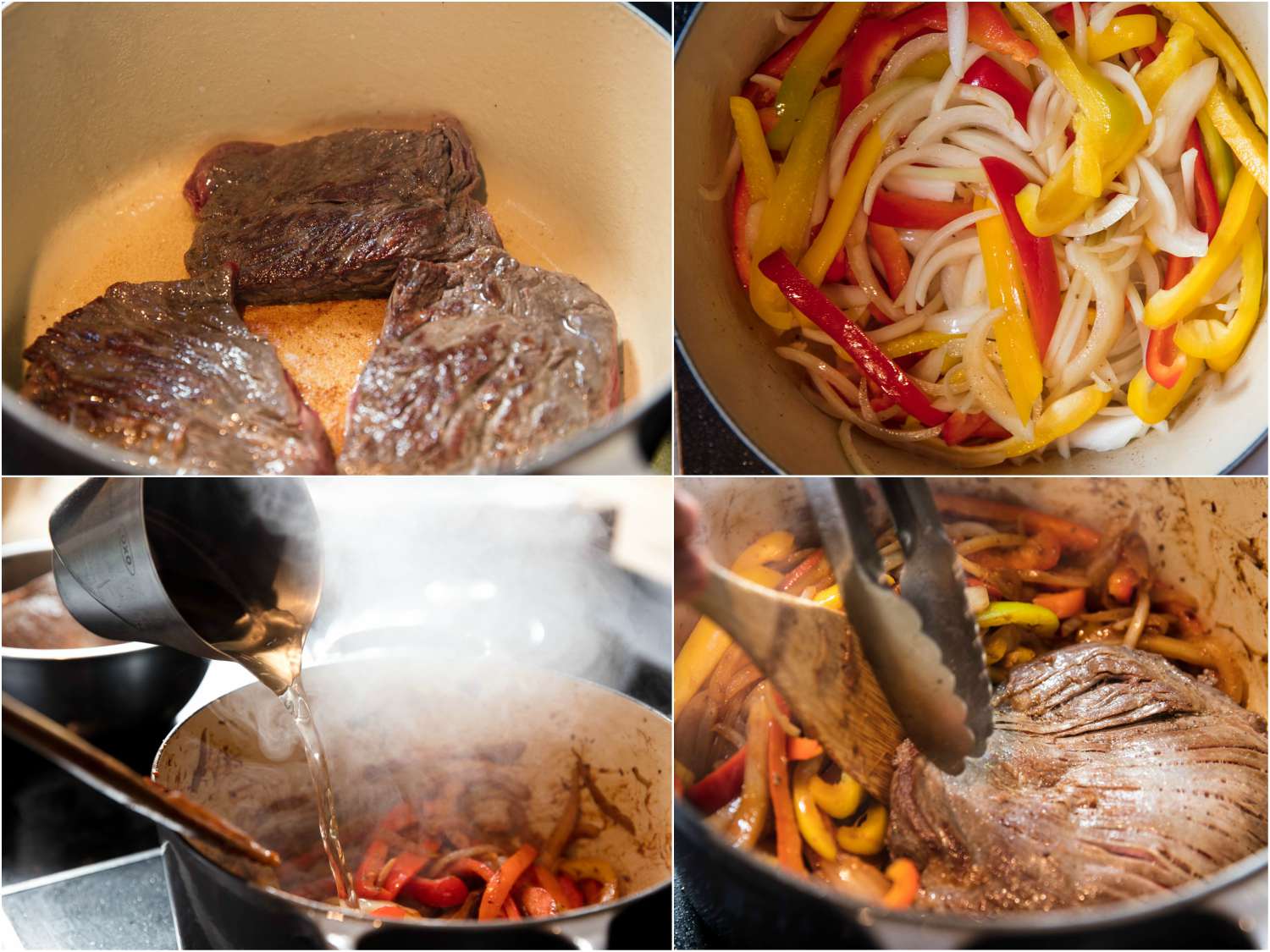 After that, I add sliced onions and bell peppers, plus a generous dose of minced garlic, and cook them all down until softened. Many recipes call for some portion of green bell peppers, but my preference is to stick with red, yellow, and/or orange ones, which, unlike green peppers, are fully ripe, and thus sweeter and more flavorful.

Next, I add spices, like cumin and dried oregano, and a small amount of tomato paste, cooking it all for a minute or two to deepen the flavors of those ingredients. Then in go white wine, canned tomatoes, and water or chicken stock. If you have homemade beef stock, you can use it here; otherwise, chicken is the better option, as its flavor is always superior to that of store-bought beef broth. 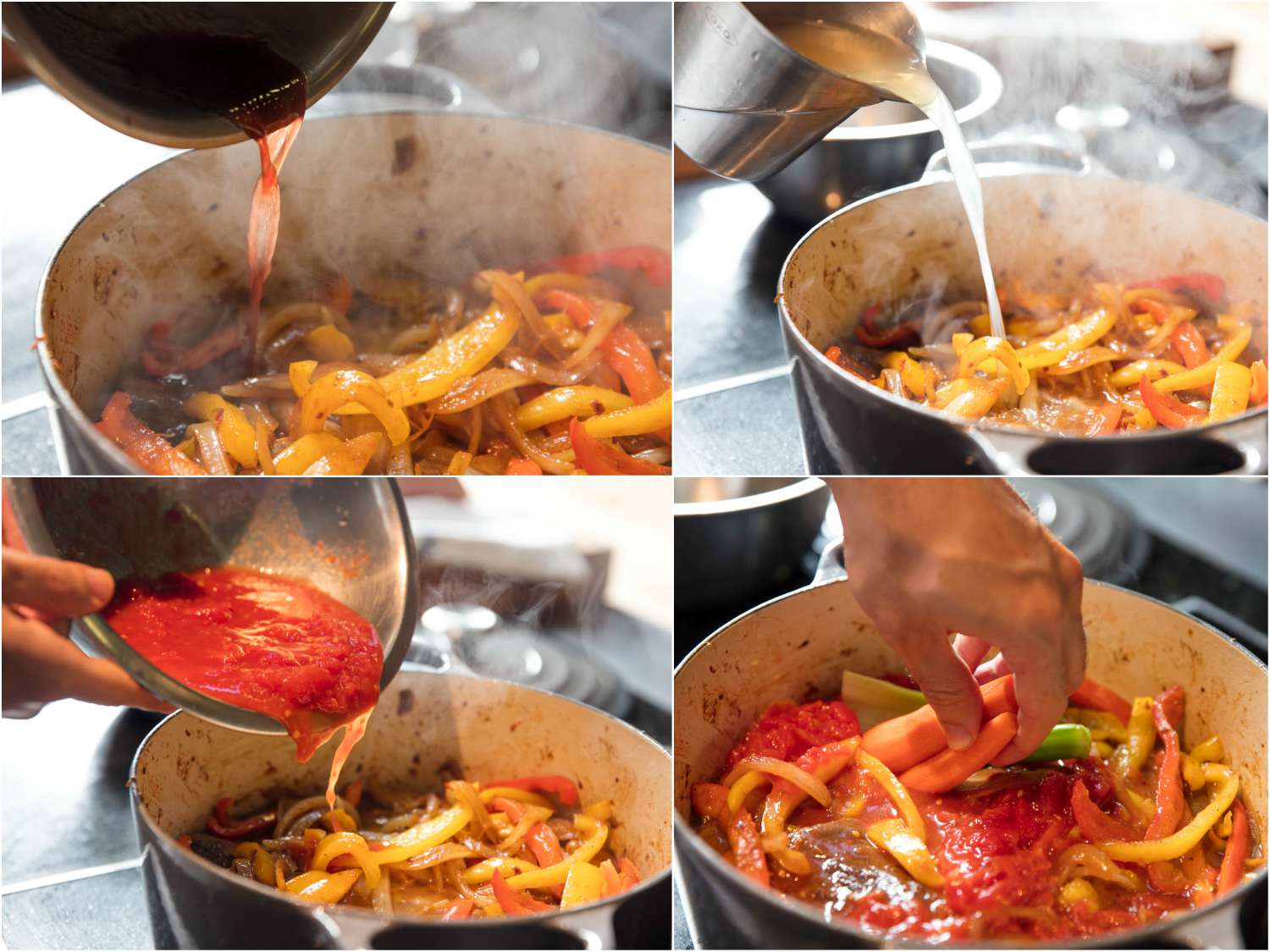 At this point, I add the beef, its juices, and a couple bay leaves, as well as some large pieces of carrot and celery. Those are aromatics that would have gone into the poaching pot had I used the more traditional method, but rarely would end up in a finished ropa vieja; by keeping them large, I can fish them out later. 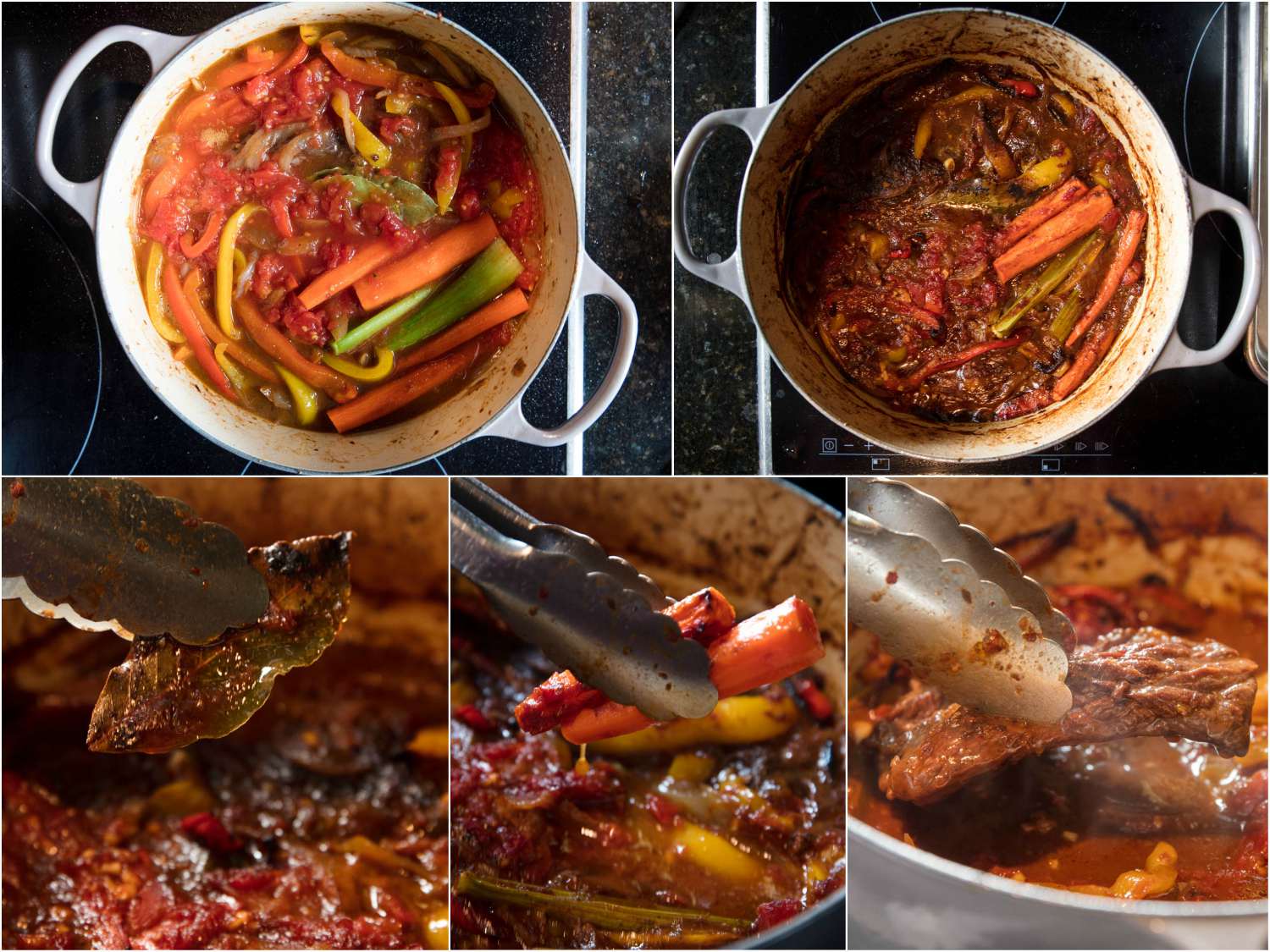 The whole pot can then be left on the stovetop to simmer, or, better yet, go into a 350°F (180°C) oven to cook until the beef is tender. The oven adds an extra layer of complexity, since the enveloping heat allows the stew’s surface to brown as it cooks, something that doesn’t happen on a burner.

The final step is to fish out the bay leaves, carrot, and celery, then shred the meat into long, thin strands. Mix it back in, toss in some green olives, and simmer it just a little more until the juices have reduced enough to coat the beef in a rich sauce.

It’s a method that saves you time, effort, and cleanup, with a bigger, richer result. But that’s as far as I’ll go here. There was already one missile crisis in Cuba—we don’t need to add any more bombs to the picture, umami or otherwise. 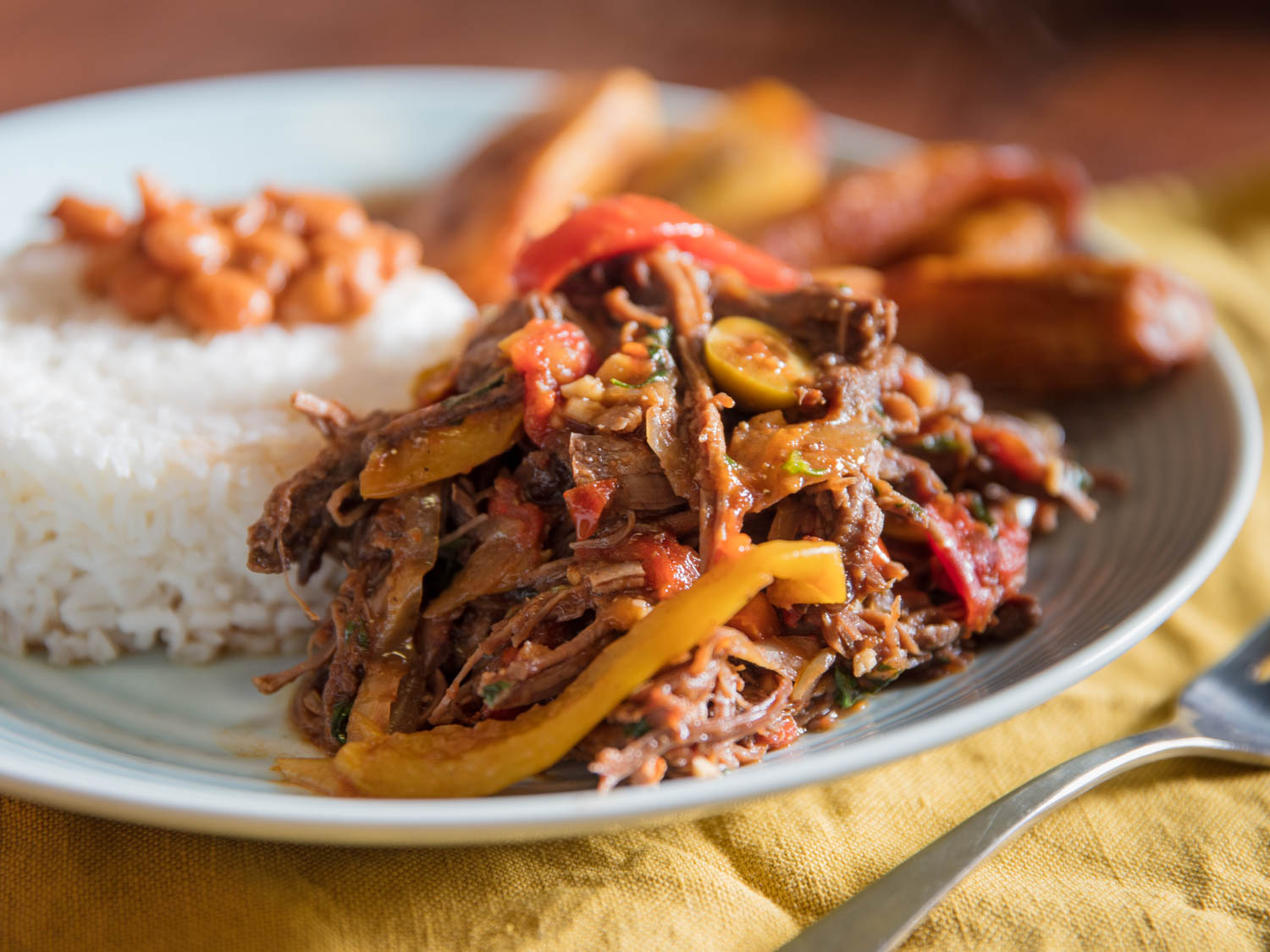