It’s something you have probably have done yourself: cooked or pre-cooked vegetables before adding them to a recipe. This is almost always done the same way: peel the chosen vegetables (carrots, for example), cut them up, boil them in salted water (using a tablespoon or so of coarse salt per litre), then cool them rapidly in cold water to stop the cooking. They are then ready to use in the recipe. 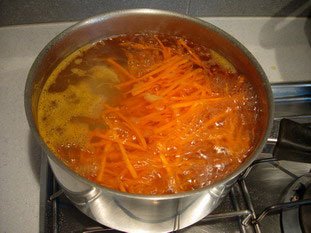 This very simple way of cooking (the French call this “English style”) not only cooks the vegetables, but leaves us with something else: a vegetable stock. As they cook, the vegetables release some of their flavour into the water. So, if you have several different kinds of vegetables to cook the same way, you will end up with an excellent stock which is far too good to throw away! To make use of it, simply let it cool, then filter it into a bottle (or other container) with a lid that seals well and keep it in the fridge.

Next time you need to boil vegetables again, instead of using a pan of fresh water, re-use your stock, and your vegetables will taste even better (add more water and/or salt if necessary).

Each time you repeat the operation, the richer and more flavoursome your stock will become. This doesn’t only work with vegetables; you can use it to cook meat as well – which will improve your stock even further with a stronger flavour.

– Even in the fridge, the stock won’t keep very long, so if you do not use it within the next week to 10 days, either freeze it or boil it up again on its own.

– When you are making soup, use your stock rather than plain water (or top up with water) – you will be amazed at the difference in flavour.

– If you boil potatoes in the stock, peel them first, as the skins will do nothing for the flavour, other than add an unpleasant “earthy” taste.

– If you are making stock for the first time, you don’t need to start it from scratch. Add ½ an onion (peeled) to the salted water and, if possible, a bouquet garni, or at least a handful of leek greens and a spring of thyme to give it a head start. Even better, you can start by making a more sophisticated version, a real vegetable stock.

– Don’t be too quick to condemn commercially available stock cubes – they are practical and can be a good way to start a perpetual stock, especially if they are organic, but do check the label carefully to see what is in them.

To sum up: Do not throw away cooking water used to boil vegetables or poach fish or meat – this is no longer just water; it is now a delicious stock that can be perpetually reused and added to: the ultimate in kitchen recycling.

Stock (or bouillon) has long been a cornerstone of French cuisine. It is worth remembering that to the French, “bouillon” is a familiar term for a basic popular eatery. Back in the 17th and 18th centuries, in the streets of Paris and other large towns, there were little shops or stalls known as “marmites perpétuelles” (perpetual pots) where huge cauldrons containing a bouillon of vegetables and meats (mostly poultry), simmered away day and night over low fires, and from which one could buy a bowlful at any hour of the day. Each time a bowlful was served, more water was added to the pot and more vegetables and meat were added to replace what was taken out. After all those hours of slow cooking, the resulting mixed broth had a robust and quite unique flavour.

Back to top of page

I am going to a weiner roast tonight and needed to come up with something quick and easy. I love the traditional Oreo Fluff type...

Provided ByRecipeTipsWith the first bite of this unique tuna sandwich, you will agree that it is one of the best sandwich recipes...

For all of us looking for delicious chicken recipes, this terrific chicken and vegetable stir fry is not only tasty but low in saturated...

It's time to get outdoors and enjoy some fresh and healthy food! That's why this week's meal plan includes delicious options like...