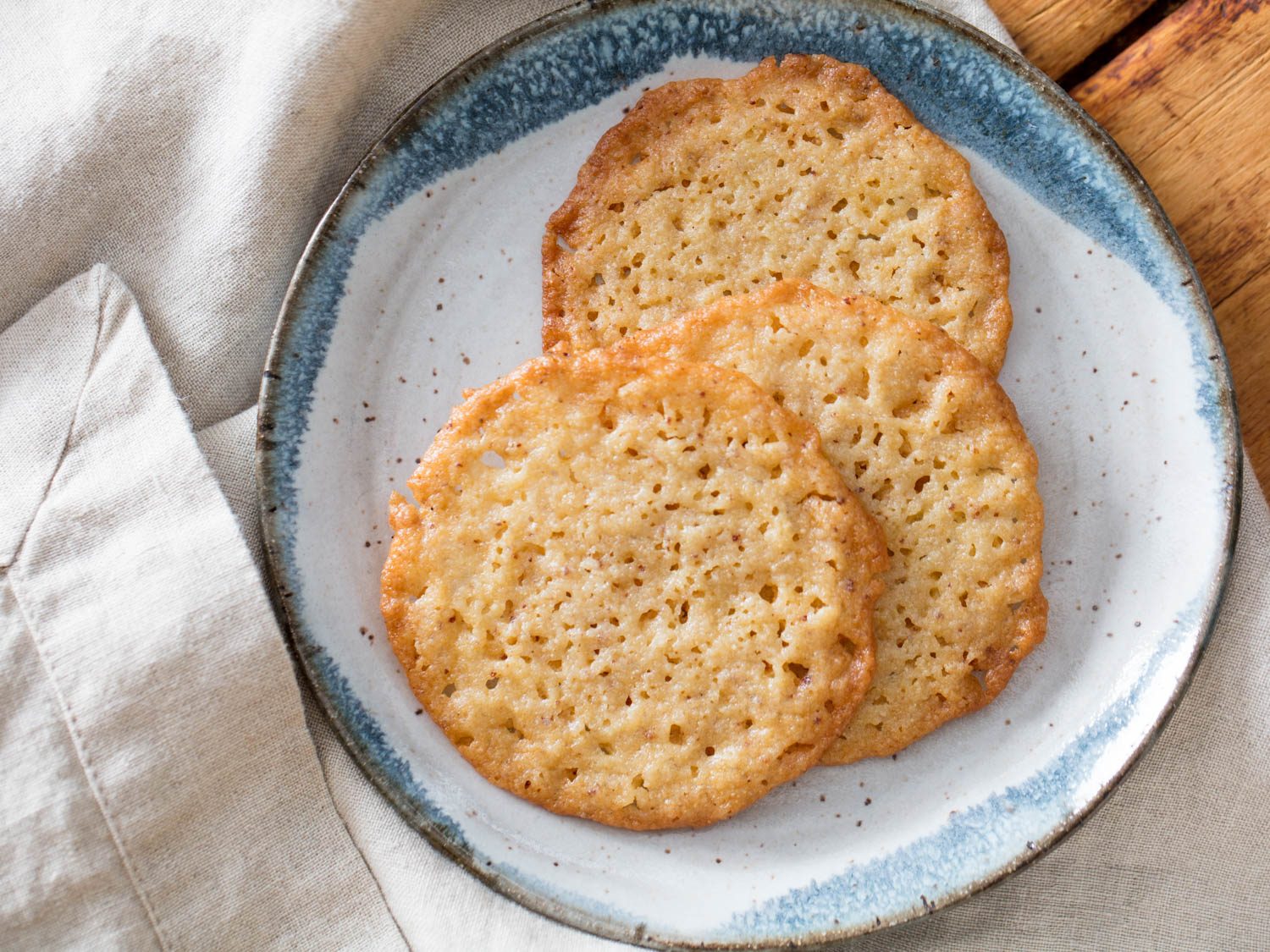 Two days after Christmas, while playing around with some leftover ricotta, I made a delicious mistake. The goal had been to make a batch of Italian ricotta cookies with a brown butter twist, but, thanks to some miscalculation, the experiment fell flat…literally. The cookie dough started out nice and thick, then puffed up beautifully in the oven, but seconds later, it collapsed and spread into a paper-thin puddle of bubbling goo.

The attempt had been something of a crapshoot anyway, a last-minute attempt to use up a few tablespoons of extra ricotta so I could clean out the fridge. With more pressing concerns on my mind than a rando-cookie failure, I set the tray of molten dough aside until it could cool enough to be tossed without melting a hole in my trash bag (been there, done that). 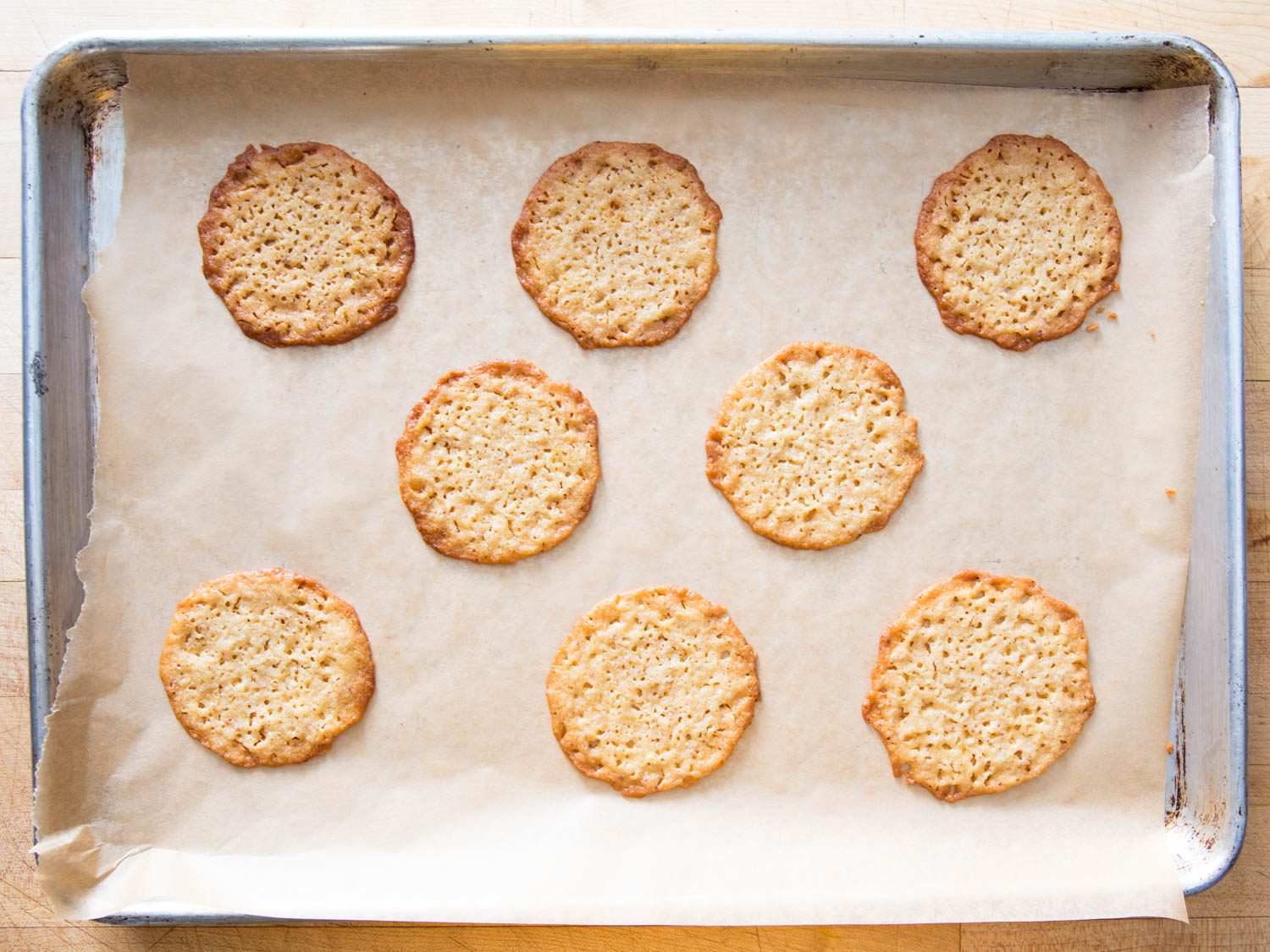 When I came back to clean up my mess, I found the cookies had cooled enough to turn snappy around the edges, with centers that were slightly squishy to the touch. Out of idle curiosity, I took a bite, and it felt like mainlining brown butter—an almost shocking hit of nutty richness. The cookie was all toasty and crisp around the edges, yet unbelievably soft and chewy at the same time, an amazing feat of contrast for a cookie so thin. 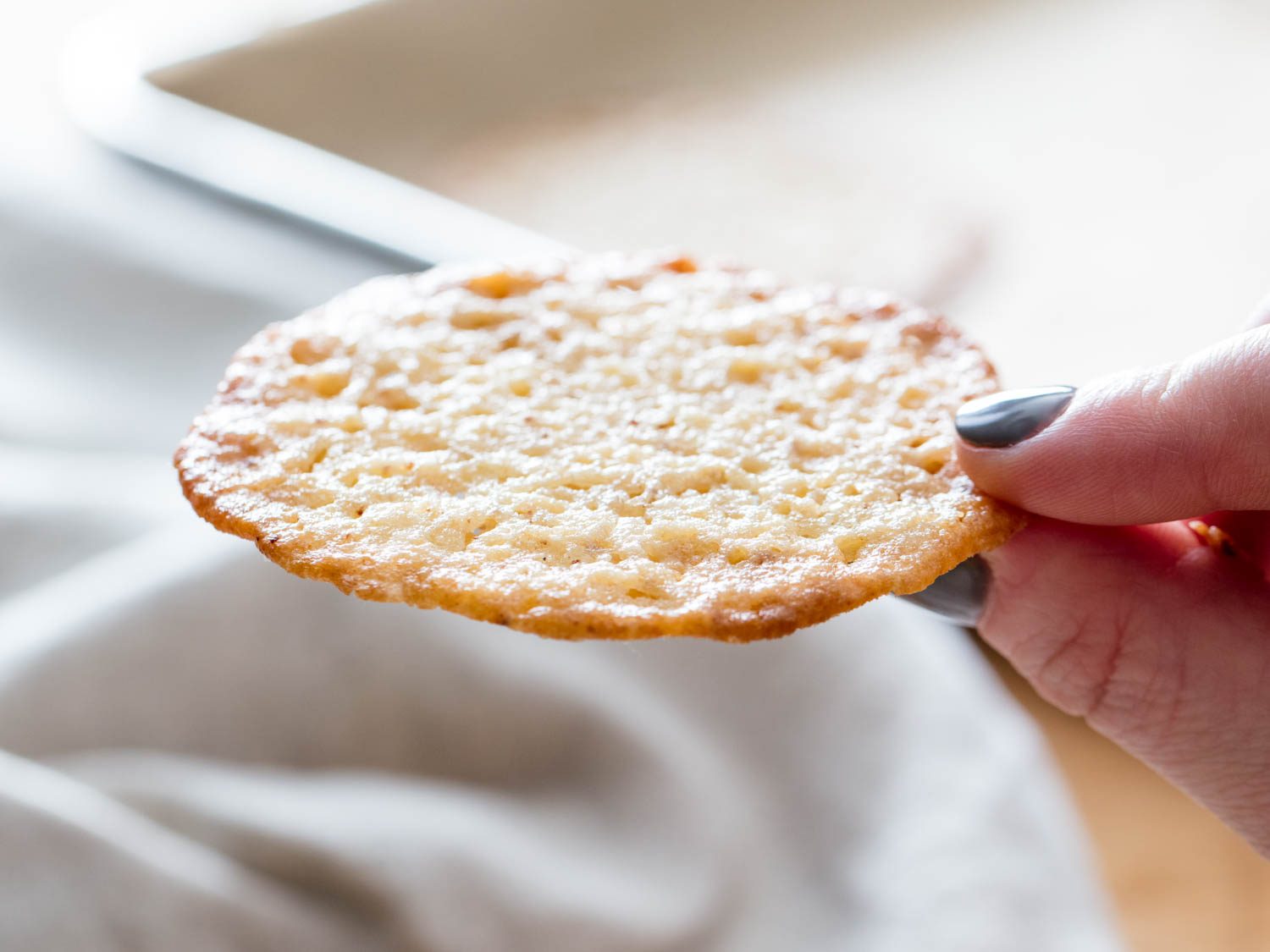 I ate another half dozen or so to be sure it wasn’t a fluke. They were an epic failure as an Italian ricotta cookie, but a total win as whatever it was they were.

Since that day, I’ve made these cookies in five kitchens across two states, with every type of ricotta under the sun. Several dozen batches in, I’ve found that their appearance can vary dramatically with the specific fat and moisture content of the ricotta itself, whether store-bought or homemade. 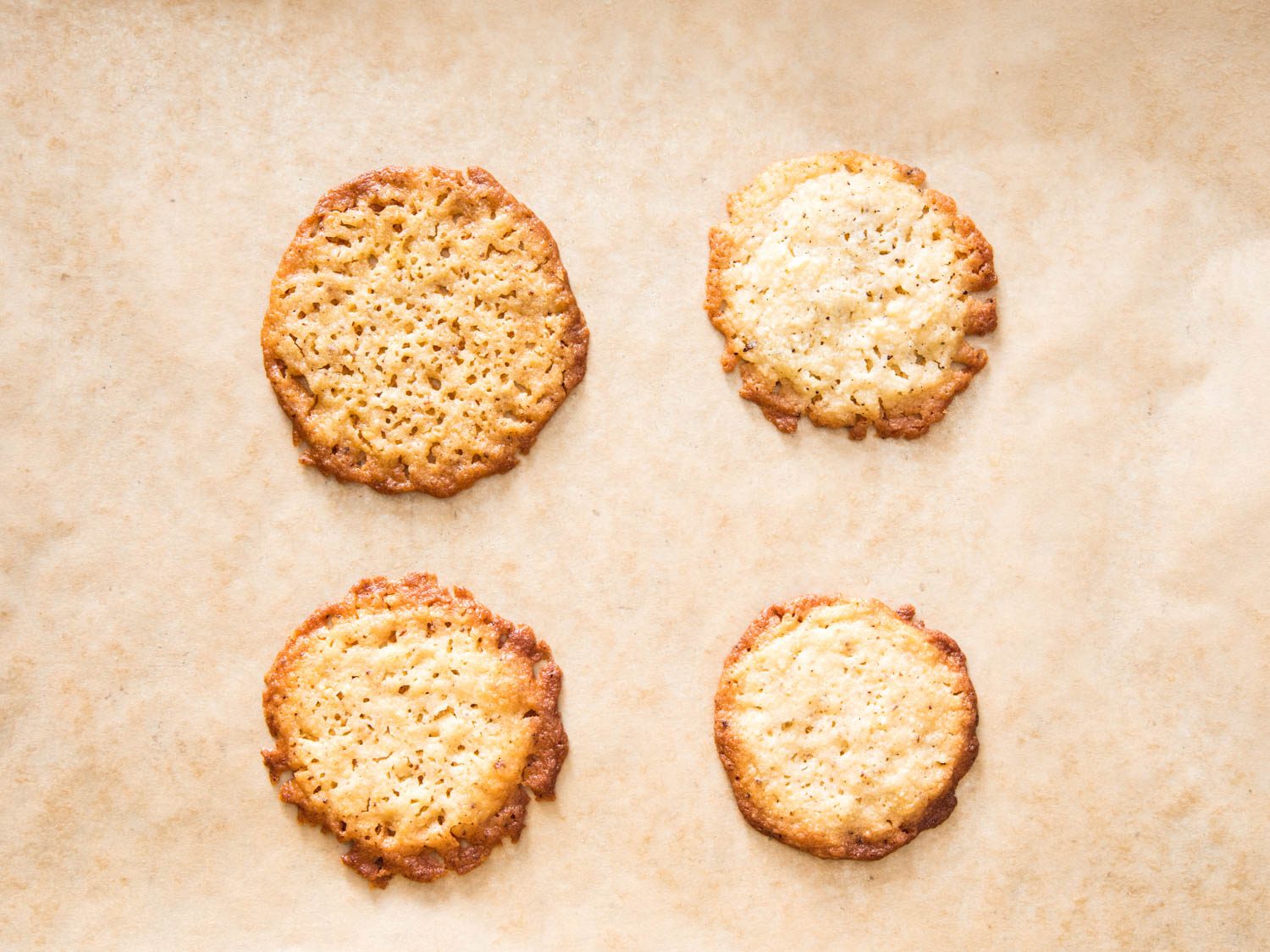 My preference is for a high-quality, part-skim commercial ricotta—for baking, it’s hard to beat the balance of a factory formulation. That formulation, however, is almost laughably different from brand to brand. Homemade ricotta, which is usually more of a farmer’s cheese, can be especially variable—its water, fat, and protein contents, not to mention its pH level, are all dependent on the specific ingredients and method involved. But despite any aesthetic differences, the cookies have tasted about the same no matter what ricotta I’ve used. Since the recipe is a mistake by nature, I’m inclined to roll with the punches and enjoy the cookies regardless of their outward inconsistencies. 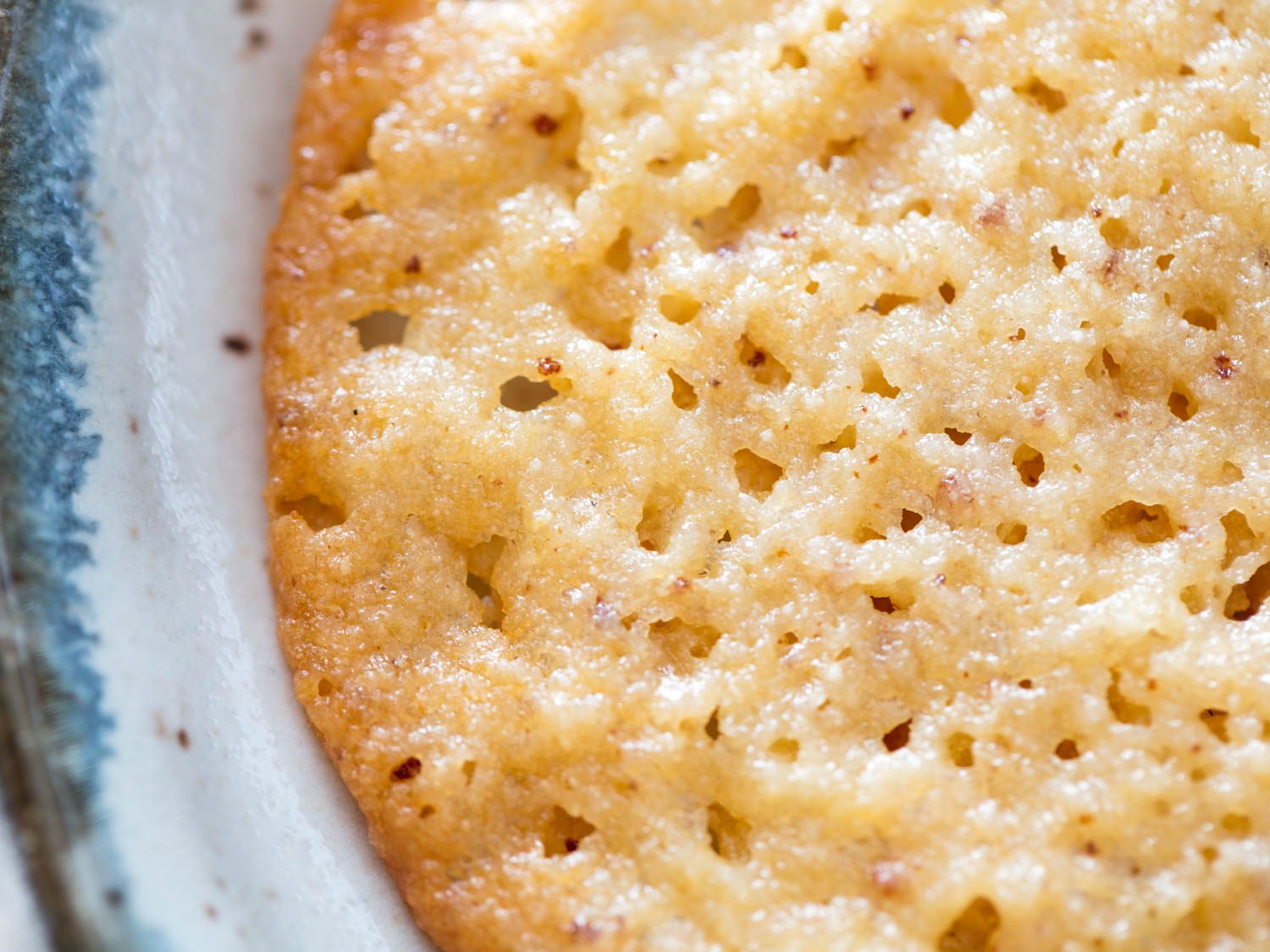 If you’d like a delicious disaster of your own, the first step is to brown some butter. It’s a quick job in a wide skillet, and if you happen to have a used vanilla bean in the pantry somewhere, you should toss it on in. This is a totally optional step, but one that can help you get more mileage out of a leftover vanilla bean, while lending the cookies a deeper and more nuanced flavor than vanilla extract can achieve on its own. 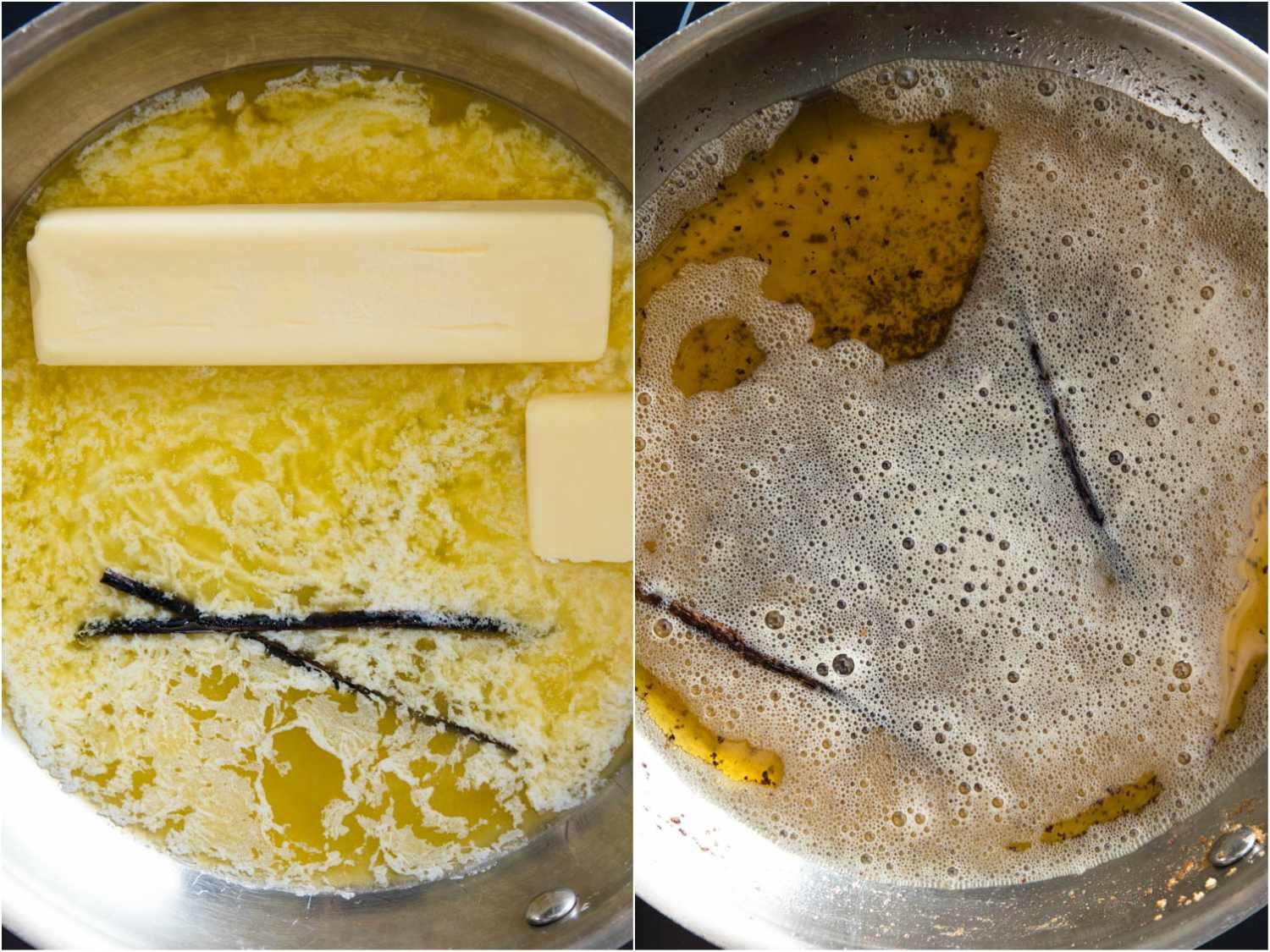 To keep the butter from splattering, start by melting it over medium-low heat. From there, you can crank it up to medium to cook off the water. As it bubbles and roars, stir and scrape the bottom with a heat-resistant spatula to prevent the milk solids from burning, and be sure to turn the heat down should they seem to be browning too fast. When the brown butter is done, it will go quiet as a whisper, and you’ll see lots of golden-brown bits along the bottom.

Immediately pour the brown butter into a large bowl, and let it cool until it turns slightly thick and opaque, but not totally solid. After that, you’ll stir in all the remaining ingredients in stages, starting with plain or toasted sugar, vanilla extract, salt, and baking soda. 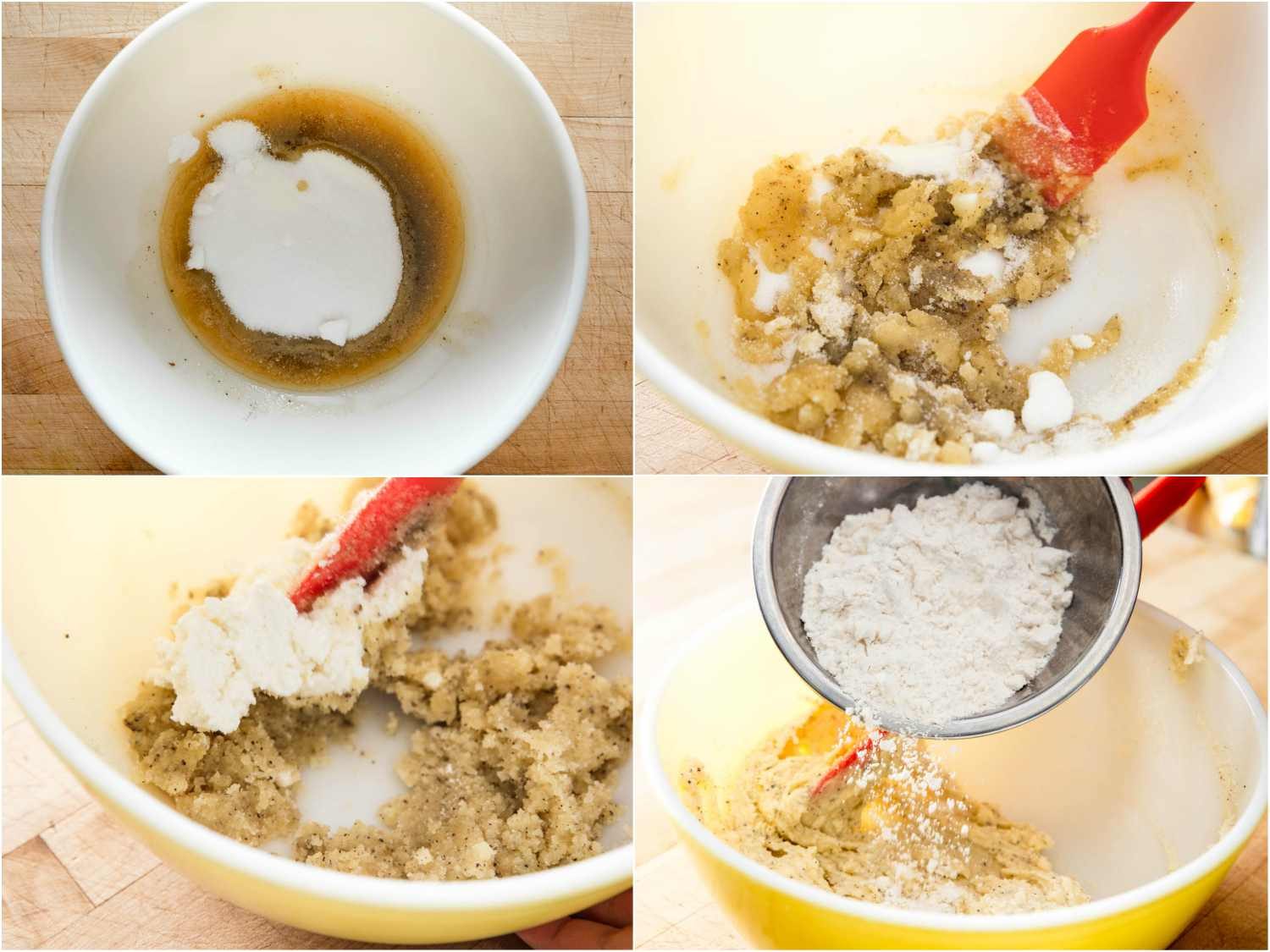 Really take your time stirring in those first few ingredients. When they’re thoroughly combined, stir in the ricotta, followed by the all-purpose flour (I use bleached Gold Medal). Once the dough is nice and smooth, divide it into about 35 one-tablespoon portions. It’s extremely fast and efficient to use a one-tablespoon scoop, but a pair of dinner spoons will do the trick. 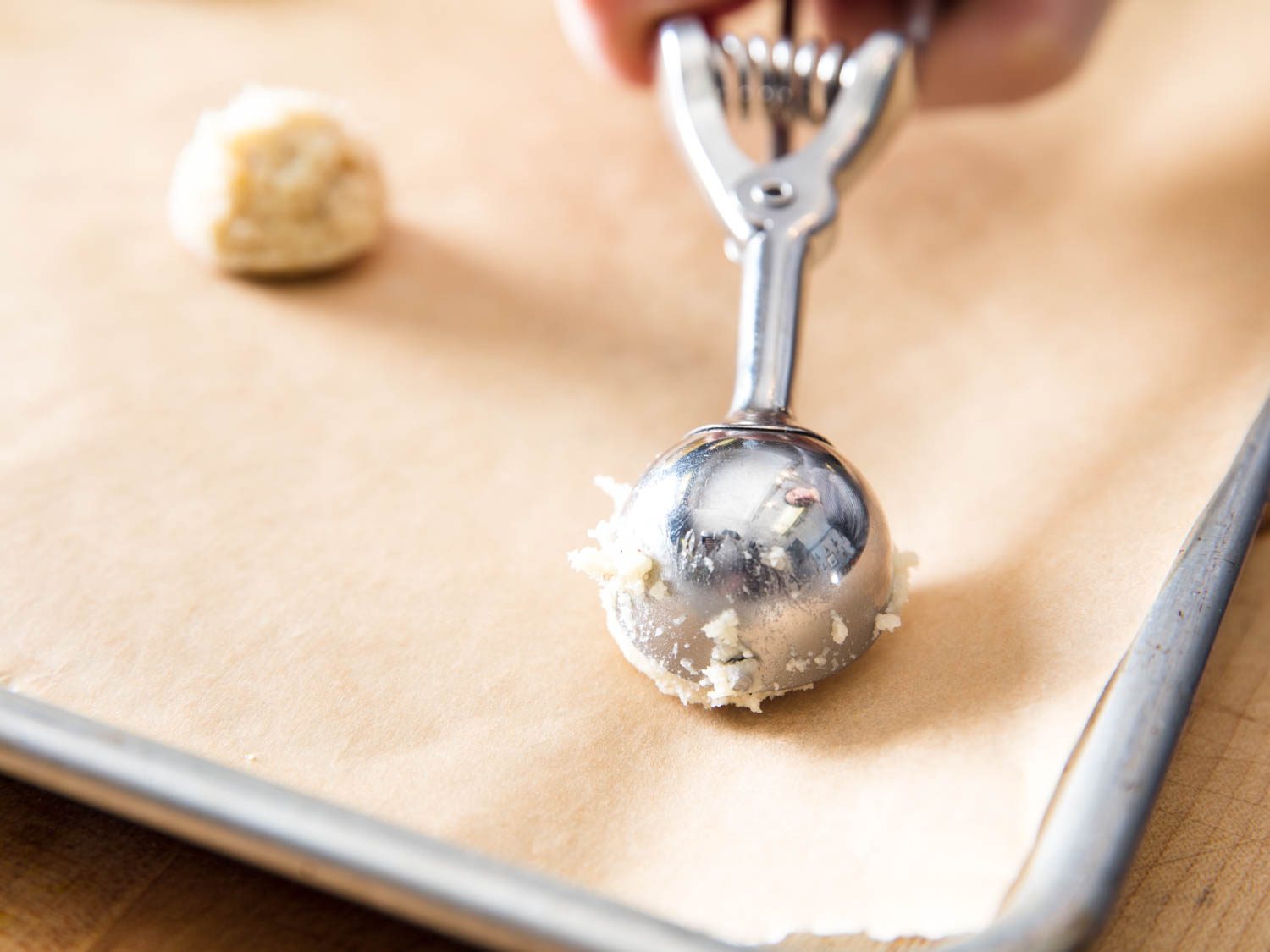 Don’t be tempted to make larger portions. Those seemingly tiny blobs of dough will spread like crazy in the oven, so much so that it’s impossible to fit more than eight on a half sheet pan. So go small, and give each ball plenty of space. 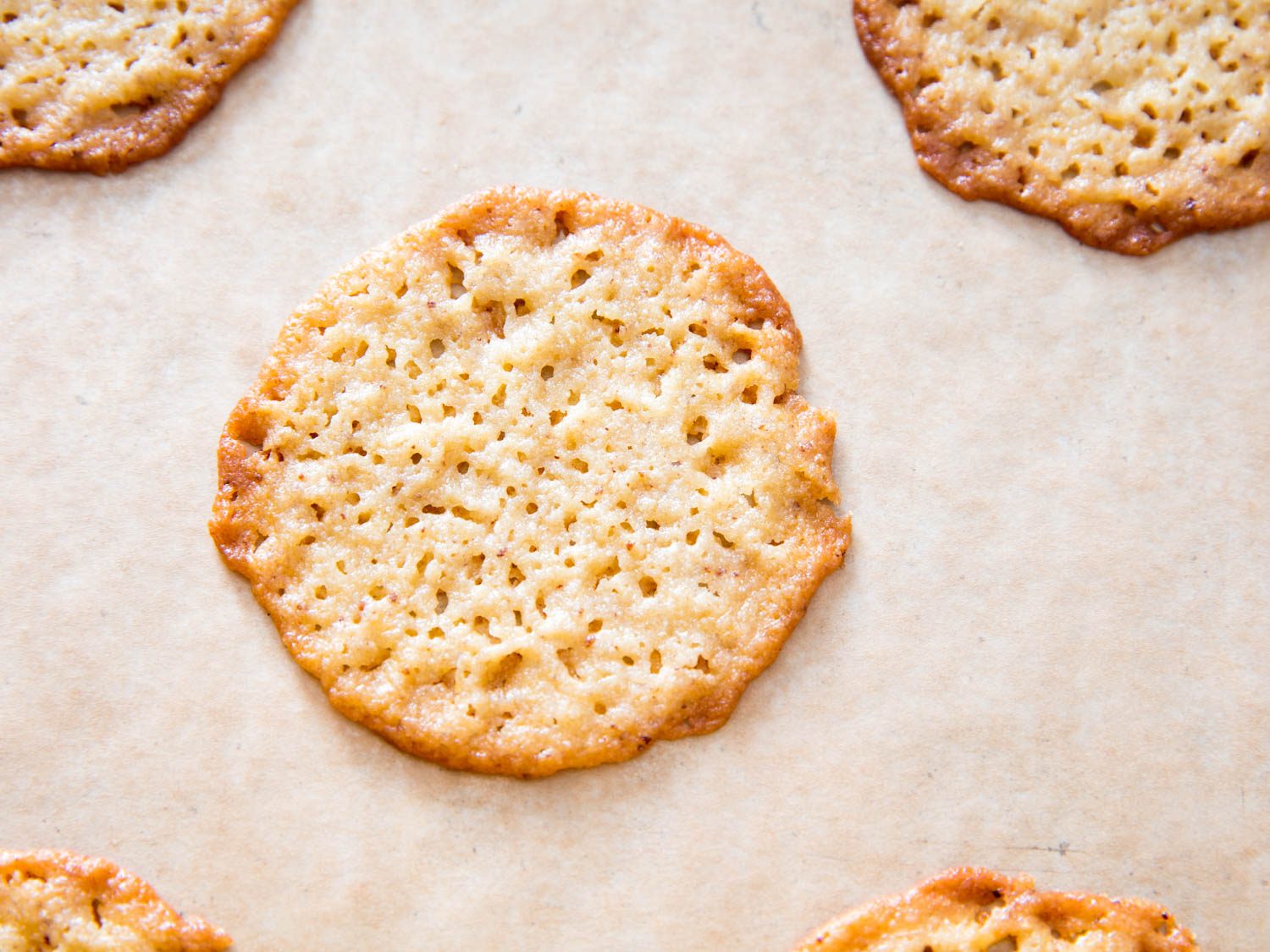 Bake until the cookies are lacy, thin, and golden around the edges, then let them cool to room temperature. The cookies are squishy, almost greasy, while warm—a texture that resolves itself into something pleasantly soft and rich as they cool. Plus, giving the edges time to crisp up is more than worth the wait. 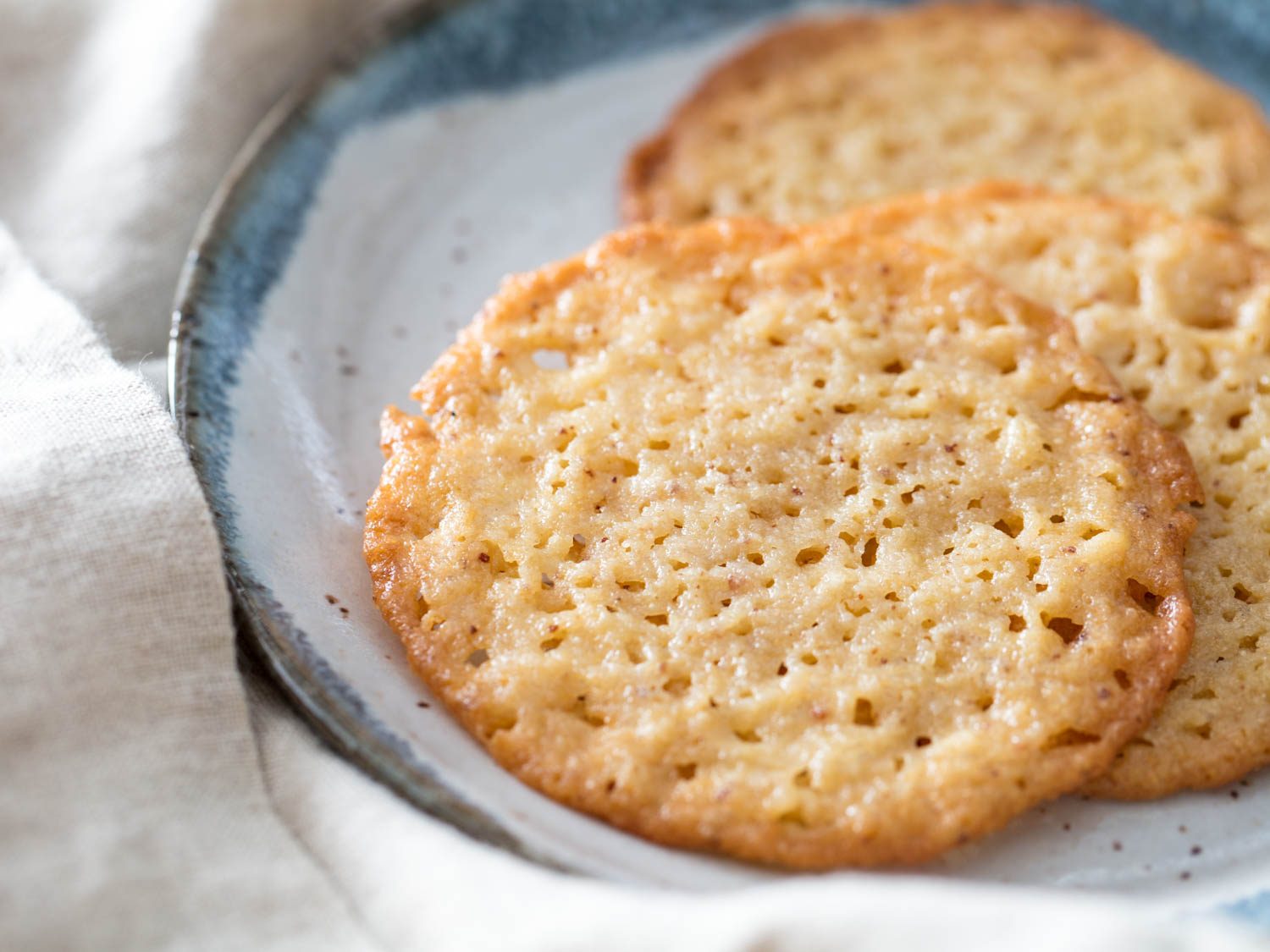 They may not be traditional ricotta cookies, but these delicate wafers have an undeniable charm all their own. I can guarantee I’ll be making this mistake over and over again in the years to come.

Every time coconut oil enters the news, journalists can’t make up their minds about whether or not it’s good for...