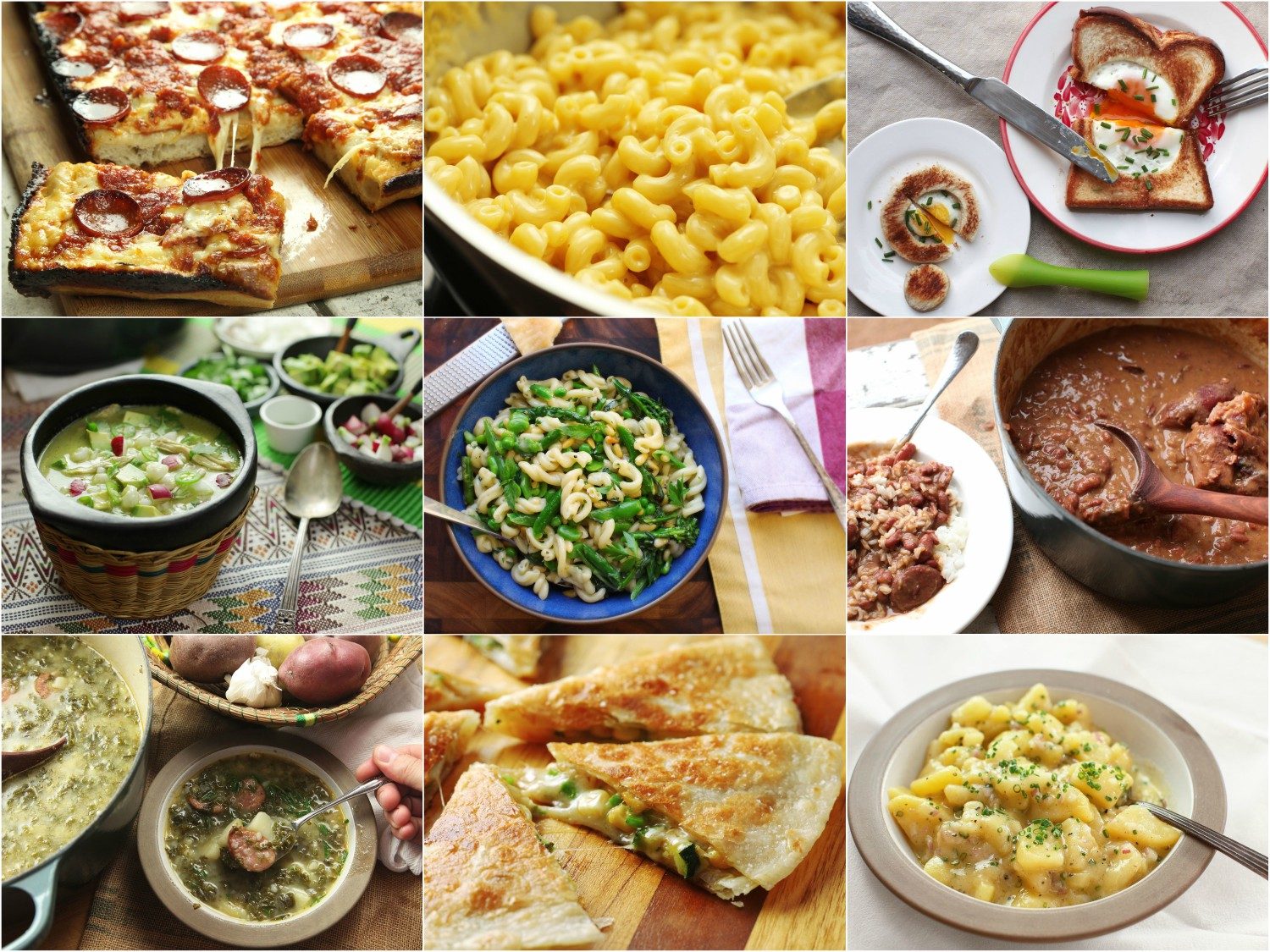 Every year is different, but this year has been extra different for me. I’ve spent a big chunk of my time working on a second book (currently slated for release sometime in 2019). The book has a much stronger emphasis on non-American techniques and recipes than my first book did, which happily coincides with the way I typically like to eat at home. I’ve also been hard at work on the opening of Wursthall (come join us for beer and sausage in San Mateo when we open the doors in February)! And oh yeah, my wife and I also created human life pretty much from scratch and I’ve discovered that I enjoy stay-at-home-dad’ing even more than I enjoy testing recipes and writing all day every day (which is to say, a lot).

So there’s really one thematic element you’re gonna see in this list: Easy and delicious family meals, with a few weekend projects thrown in for good measure. 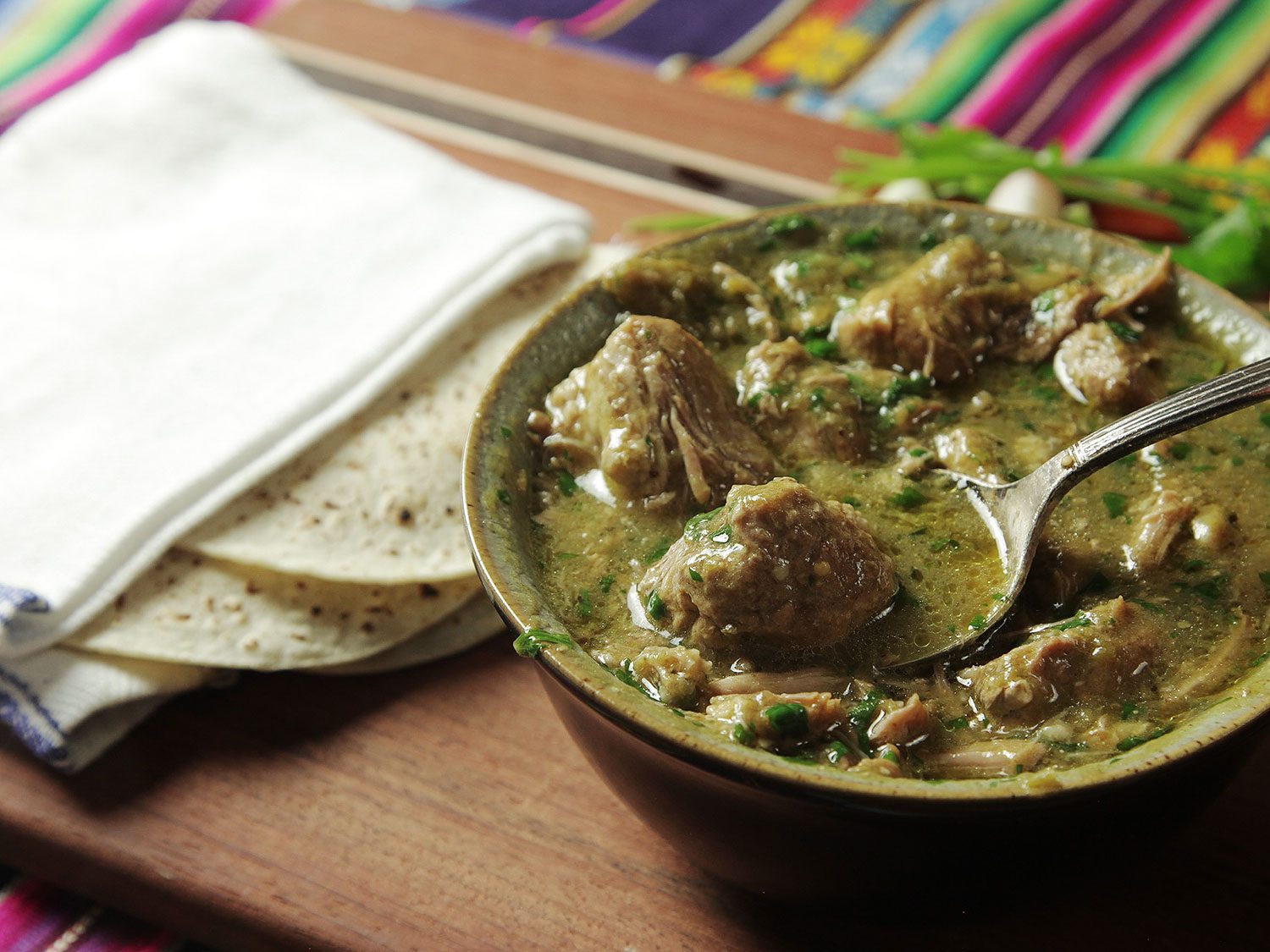 As a new parent who doesn’t have as much time on his hands to cook as he used to, this is my favorite type of pressure cooker recipe. No pre-cooking, no searing, no simmering, no added liquid to water down flavor, no nothing. Just dump a bunch of roughly chopped ingredients into the cooker, seal her up, and let her go. By the time dinner time rolls around, you’ve got yourself a rich, complex stew with tender chunks of pork bathed in chilies and tomatillos. The best part is you can make as much as your pressure cooker will handle. Spend 15 minutes in the kitchen, then get ready to eat for days.

Get the recipe and technique for Pressure Cooker Chile Verde » 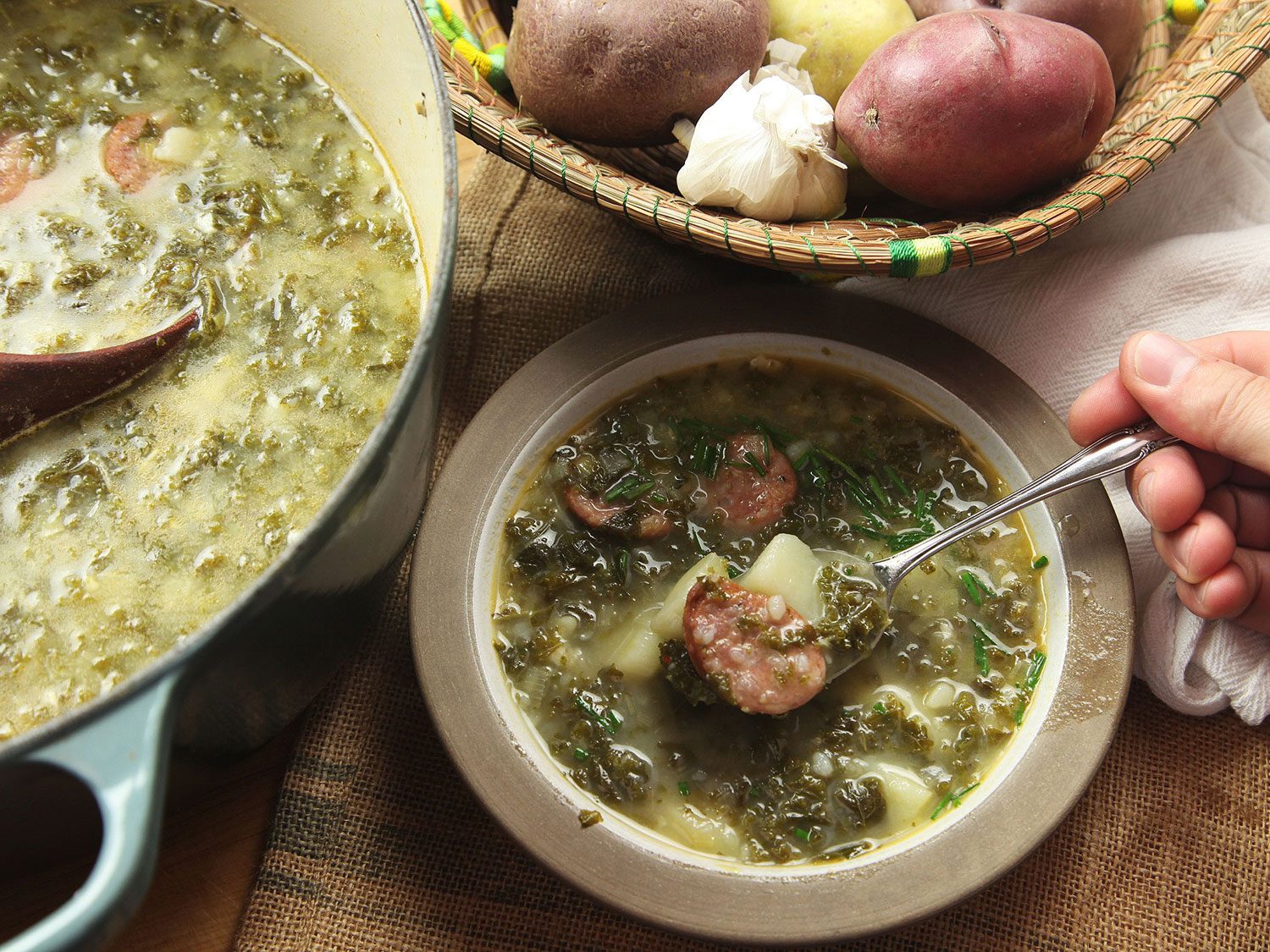 “So, what’s this soup? Just potatoes and kale simmered together until they’re mushy? Hmm. Sounds boring,” is what you might be saying to yourself in your head. And yeah. Potatoes and kale sounds kinda boring to me too. Yet when you actually cook up this classic Portuguese soup (and okay, it also gets some onions, chicken broth, and, if you’re so inclined, some chouriço), you’ll watch as those chunks of potato slowly break down and thicken up the soup while the kale reveals flavors you never knew it had. It all transforms into something comforting and hearty without being overly heavy.

Get the recipe and technique for Calo Verde » 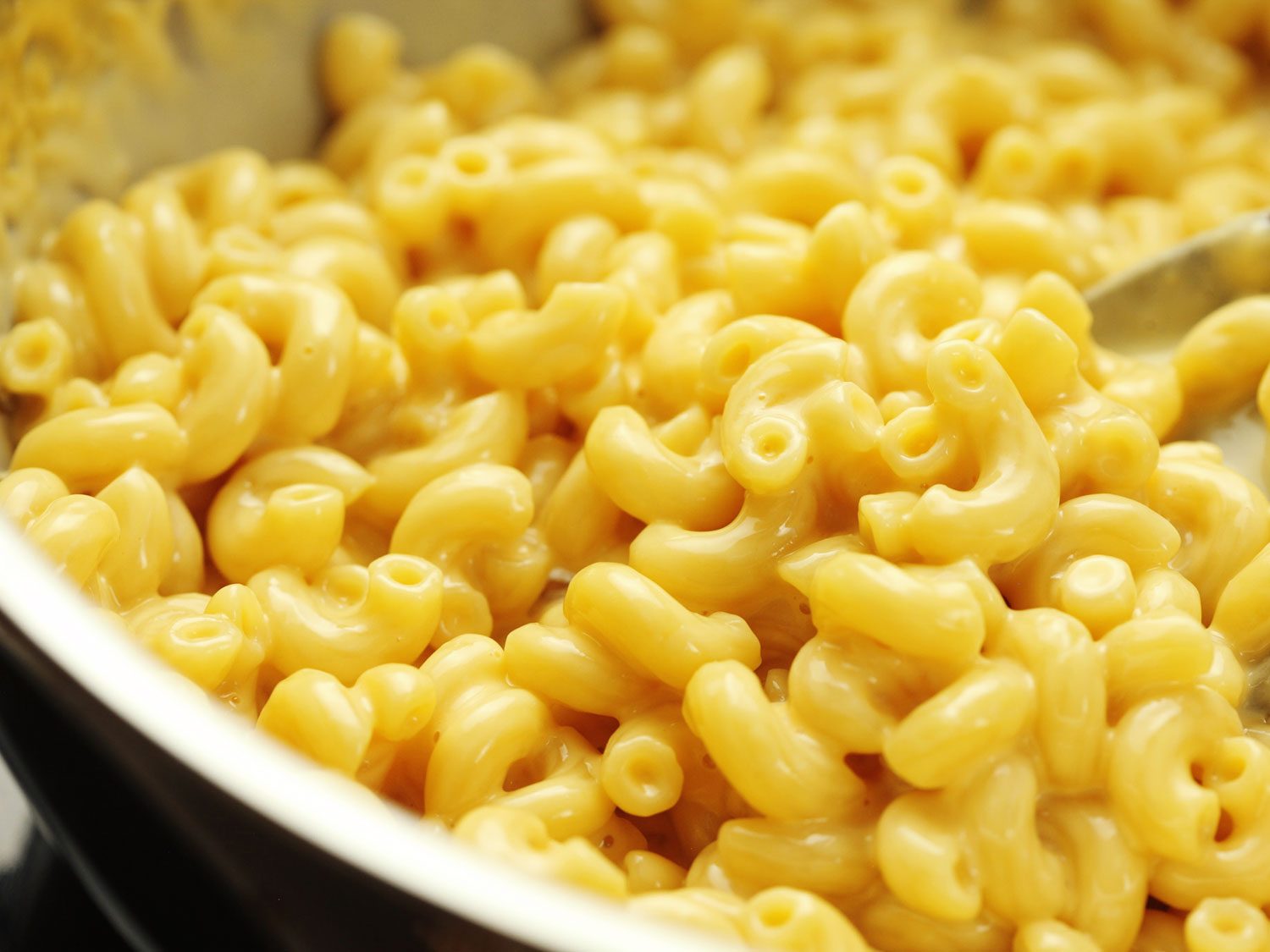 This is one of those “wait, is it really that simple?” recipes. It takes just three ingredients—pasta, cheese, and evaporated milk (in equal parts!)—and ends with a stovetop mac and cheese that is just as creamy, gooey, and delicious as far more complex recipes. Cooking the pasta in barely enough water to cover it and allowing that water to completely evaporate to concentrate starch (an emulsifying powerhouse) is the secret.

Get the recipe and technique for 3-Ingredient Mac and Cheese » 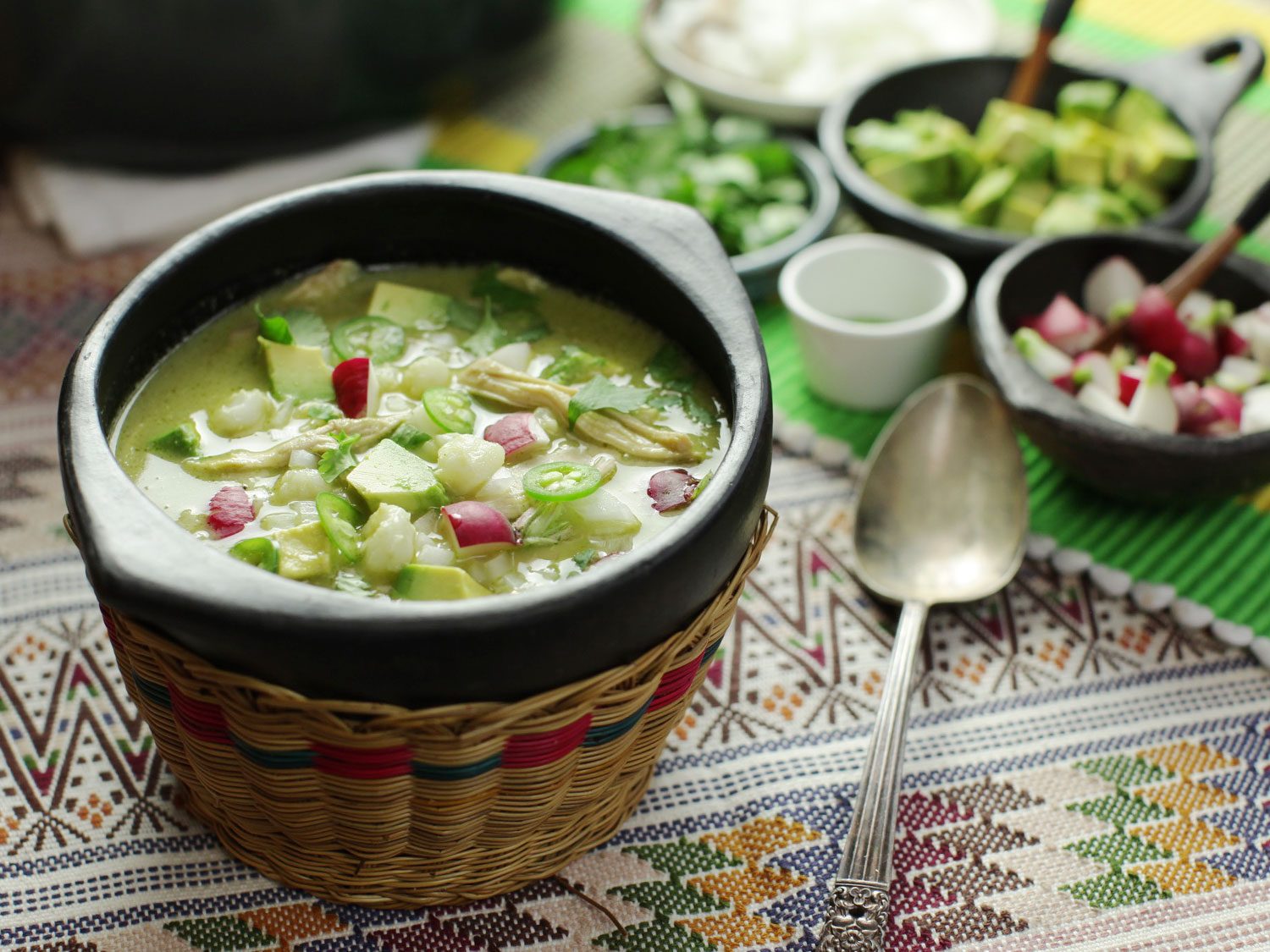 This is a bright green version of the classic Mexican meat-and-hominy soup. Made by combining several green ingredients (tomatillos, chilies, cilantro, pepitas, etc.) along with chicken and hominy, it all comes together in a single pot. The trick is adding things in the right order and at the right time in order to maximize the flavor of each ingredient and layer them into a cohesive whole.

Get the recipe and technique for One-Pot Pozole Verde » 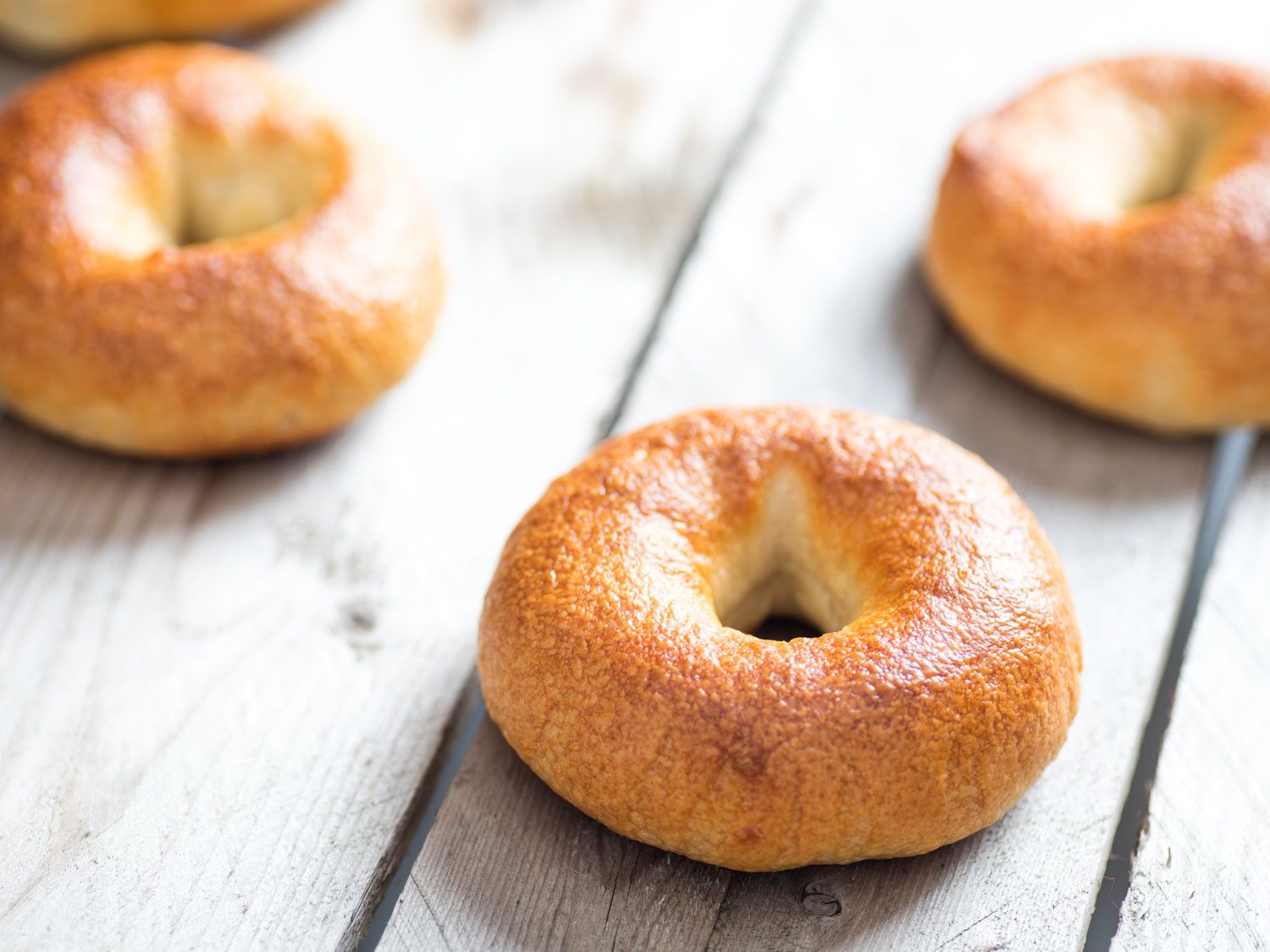 I’ve been on my own personal quest to bake the perfect bagel at home ever since moving from New York to California (where the bagel pickings are a whole lot slimmer). Leave it to Stella to publish a recipe that beats any of my attempts. By incorporated a tangzhong—a cooked flour-and-water paste that gets added to the dough—she’s able to greatly increase the shelf-life of the bagels. Most bagels aren’t worth their hole even an hour out of the oven. I’ve eaten Stella’s bagels two days later (toasted whole before slicing, of course; we are not savages who toast sliced bagels) and still got that perfect crisp-on-the-outside, chewy-in-the-middle bagel experience.

P.S. I am still working on my own personal recipe which, depending on how testing continues, may or may not make it into my next book.

Get the recipe and technique for BraveTart’s Magic Bagels » 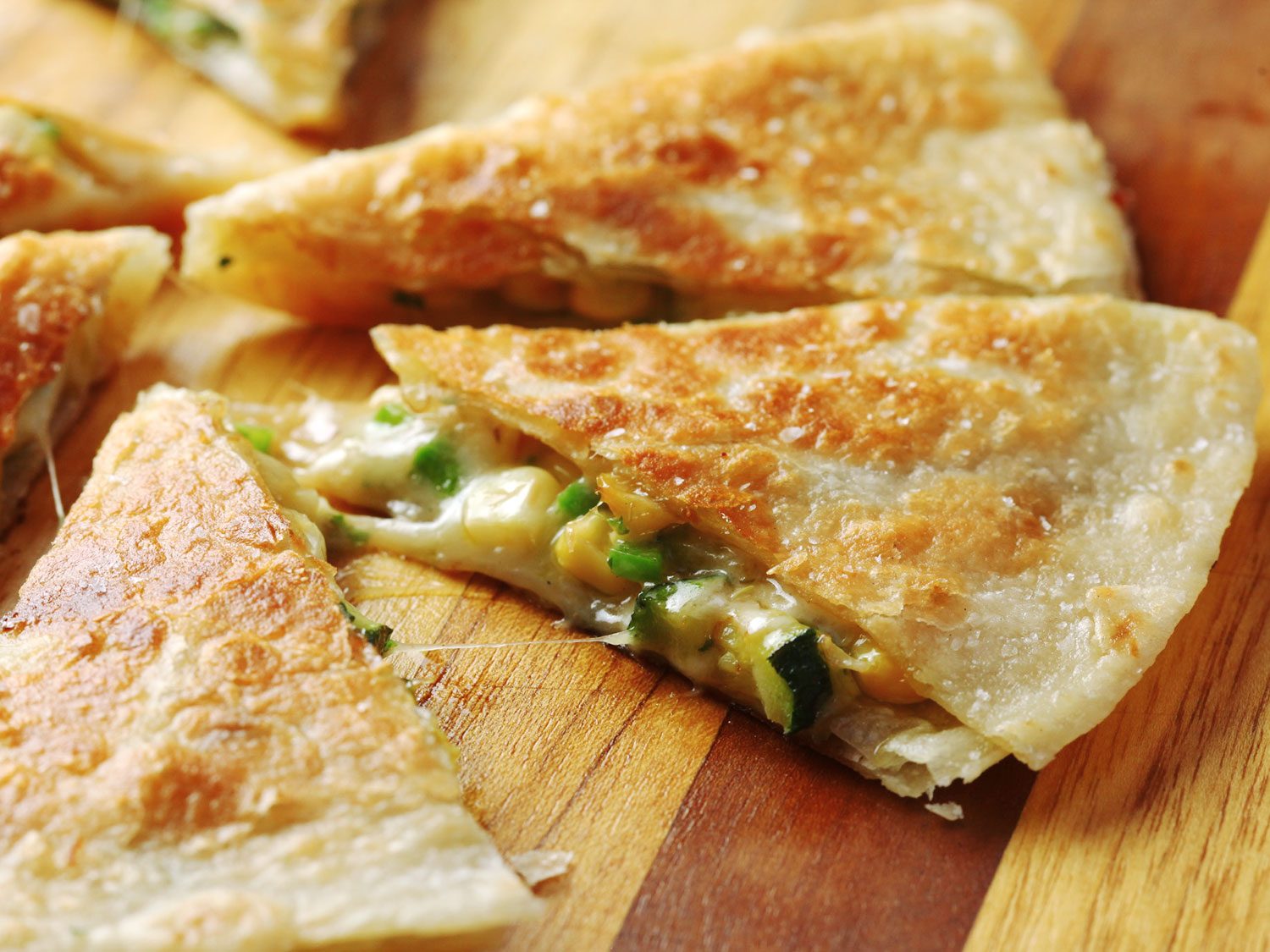 I’ve been making some variation of this style of quesadilla for a couple decades. They’re sort of like microwaving a flour tortilla with cheese except a little more work and a lot less sadness. The first key is to combine additional ingredients and aromatics directly into the grated cheese for even melting and flavor throughout (cilantro and chopped pickled jalapeño are my go-to late-night-snack), then it’s just a matter of using enough oil and managing your heat so your quesadillas end up extra-crispy on the outside and fully-melted and gooey in the middle.

Get the recipe and technique for Kickass Quesadillas » 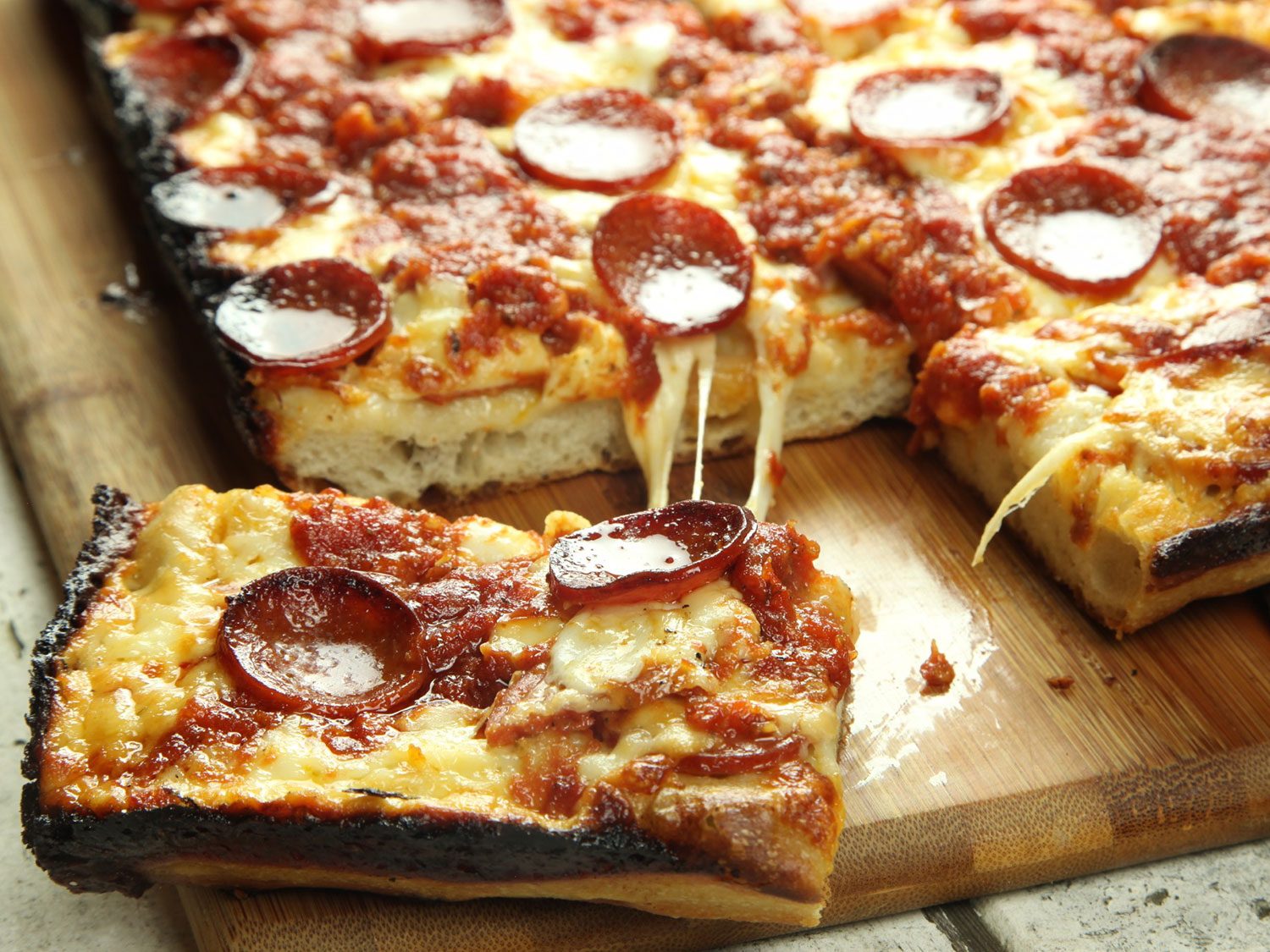 I’ve been carefully orchestrating Alicia’s pizza-eating experience since before birth, starting with ensuring that my wife Adri ate only the finest pizzas while she was pregnant. Currently I’m using a historical approach to her education. She started with Neapolitan, then moved on to New York-style slices. Next on her agenda is a New Haven-style apizza which would complete her tour of the offerings from the three pizza capitals of the world.

New Haven, New York, and Napoli may be the cheese-and-tomato-topped-bread capitols of the world, but Detroit, with its signature rectangular pies originally baked in blue steel pans used in the automotive industry, certainly deserves a seat at the United Nations of Pizza. My recipe is the culmination of a years-long love affair with Detroit-style pizza, delivering an extra-crispy crust with a tall, airy, and chewy crumb, a balanced tomato sauce, and of course those signature blackened crispy cheese edges. I can’t wait for her to try it.

Get the recipe and technique for Detroit-Style Pan Pizza » 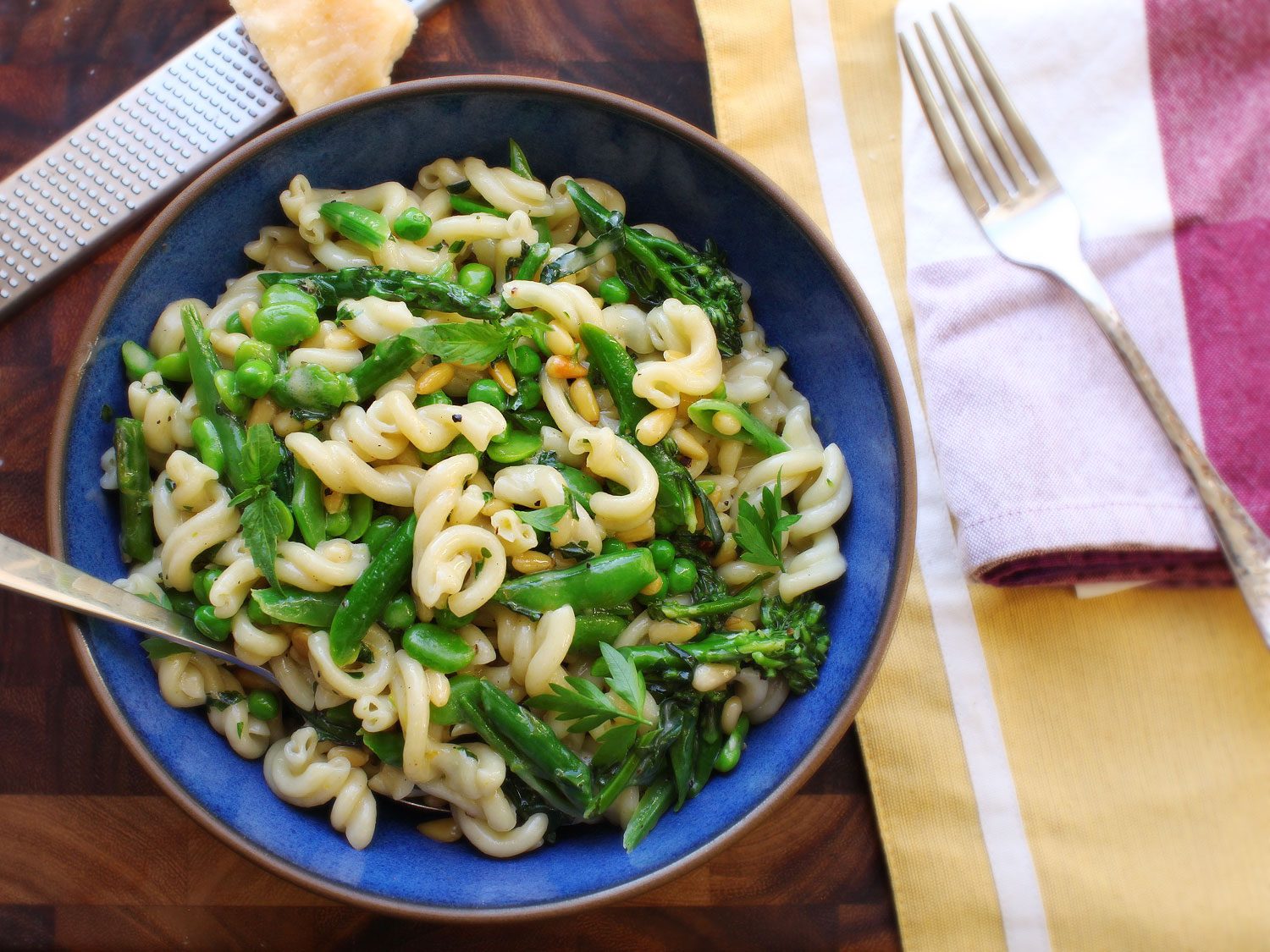 Once a classic, pasta primavera has suffered from the Olive Garden-ification effect where lightness, freshness, and seasonality go out the window for more cheese, more cream, and more year-round uniformity. There’s nothing wrong with creamy dishes you can eat year round, but dammit, I want my pasta primavera to actually taste like spring.

This recipe only works for a few months out of the year when those green spring vegetables—asparagus, peas, fava beans, snap peas, etc.—are at their sweetest, snappiest, and most tender. And what a good few months those are! My version of the dish uses a technique I learned from Melissa Clark at the New York Times, who uses crème fraîche to bind her sauce together. It all gets lightened up with some fresh lemon juice and parsley.

Alicia hasn’t been of eating age during spring yet, but boy does she love pasta and vegetables. I have a feeling she’ll do just fine with this one.

Get the recipe and technique for Pasta Primavera »

Egg-in-a-Hole for You and Your Spawn 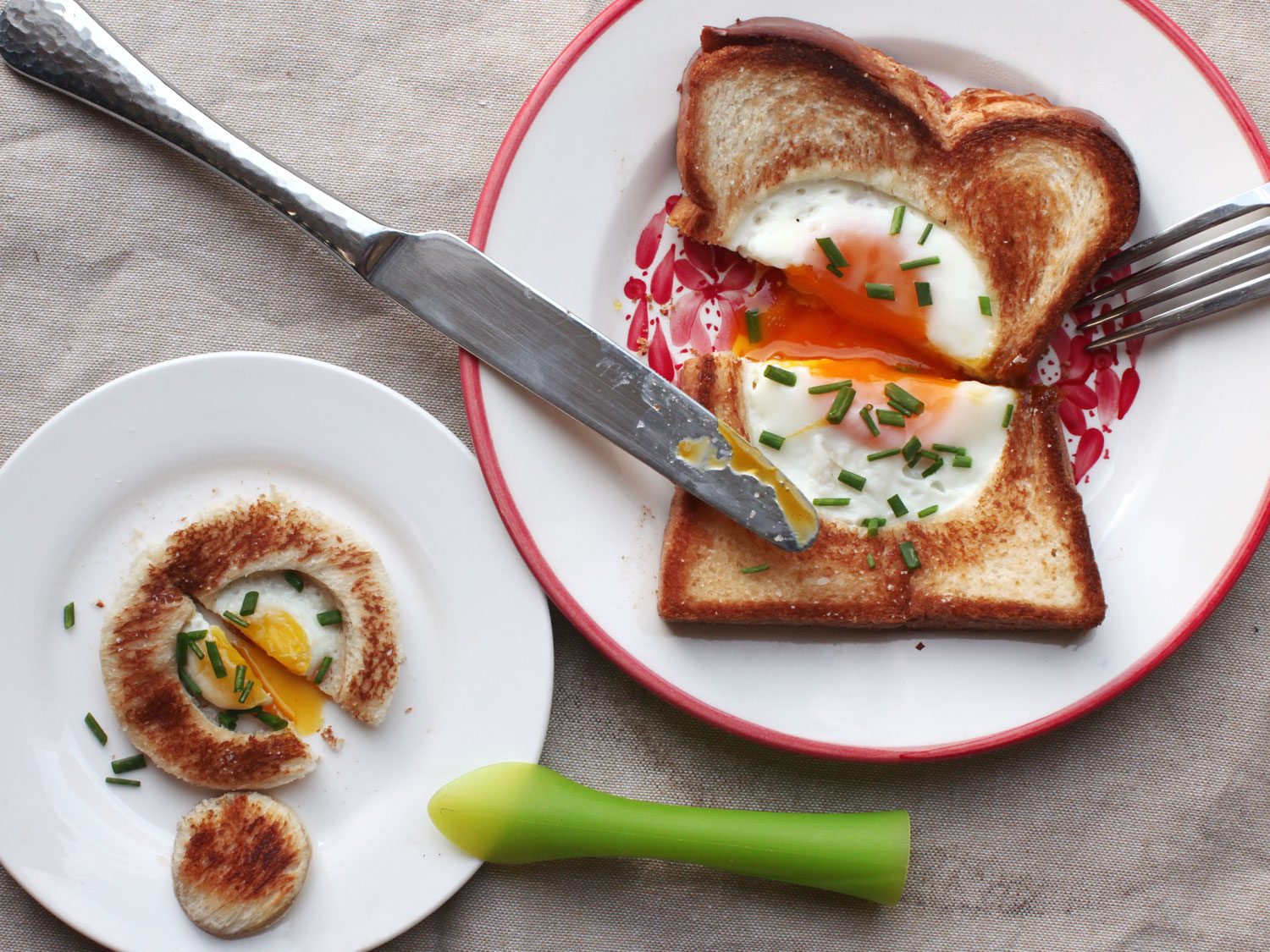 OK, here’s a secret*: I really like cooking for Alicia and she really seems to enjoy eating what I cook. Sometimes** I even succumb to the temptation to make everything cute and and put together teeny-tiny mini versions of my food for her. Tiny sandwiches, tiny salads, tiny pancakes, tiny bowls of noodles, tiny quesadillas, tiny stir-fries, etc. This particular one is probably the cutest thing I’ve ever seen my own two hands make. You start by cutting a circle out of a slice of bread, then frying it up with an egg in the middle. Meanwhile, you cut a smaller circle inside the circle you just cut out and fry a second, smaller quail egg inside that new hole. One slice of toast, two different eggs, and you’ve got a nice little breakfast for you and your spawn.

I haven’t found eggs small enough to dive in a third layer. Yet. 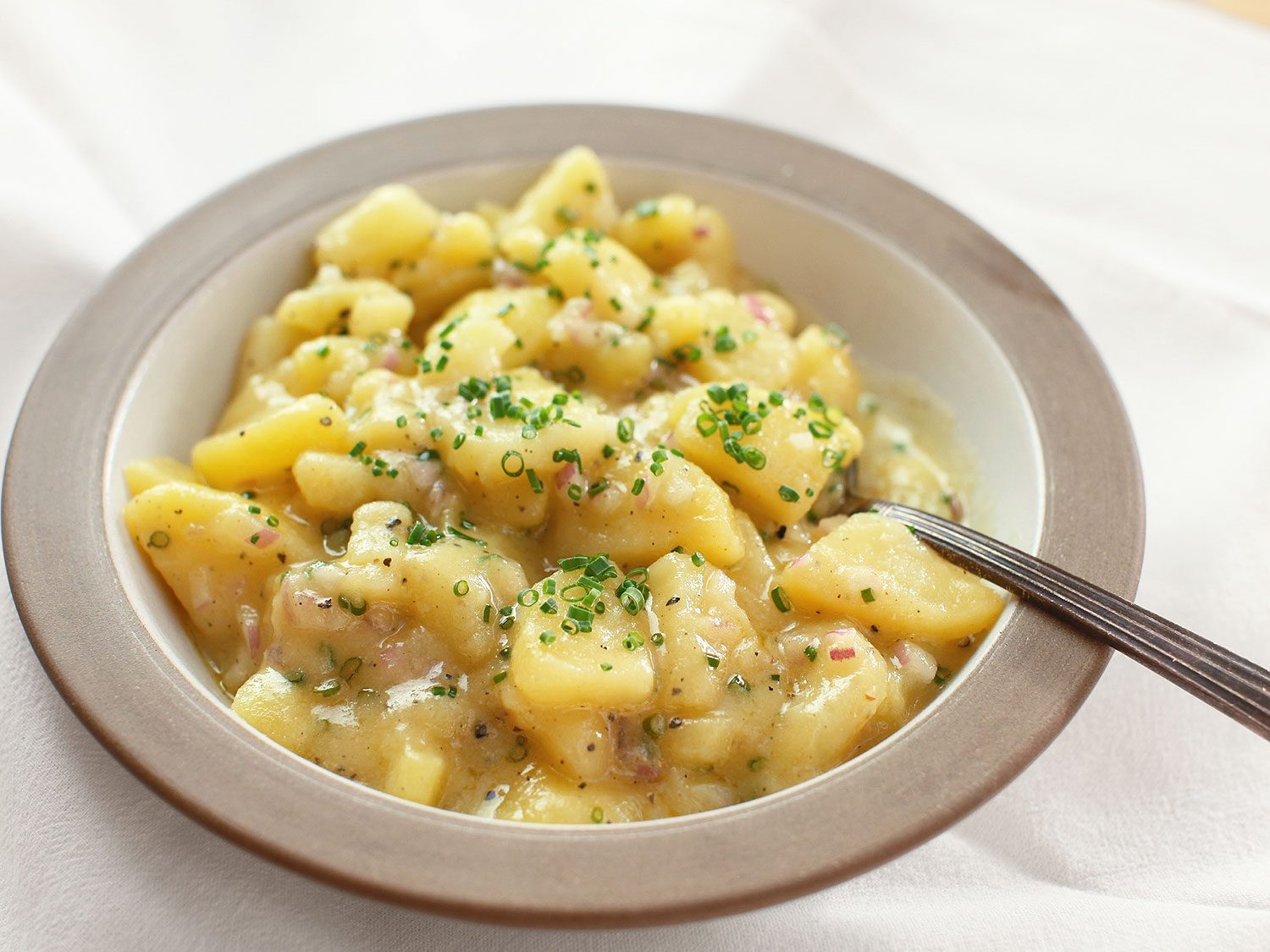 Have I mentioned I’m opening a restaurant soon? I am! Wursthall, a German and Austrian-style beer hall is gonna be opening up near my home in San Mateo around February 2018. A while back, I was debating whether to put Austrian or German-style potato salad on the menu. A “research” trip through Austria and Bavaria, where I fell in love with Austrian erdäpfelsalat, helped me decide. It’s looser and creamier than an American or German potato salad, yet contains very little fat. Instead, it’s dressed with vinegar, aromatics, and broth (typically a white beef or chicken broth), along with just a touch of oil.

One problem with making Austrian potato salad in the United States is that it’s impossible to find those uniquely sweet and earthy yellow Austrian potatoes, but I’ve found that so long as pure authenticity of flavor is not your goal (authenticity is way overrated), some good American potatoes can make a salad that’s equally tasty, if a little different.

Get the recipe and technique for Erdäpfelsalat » 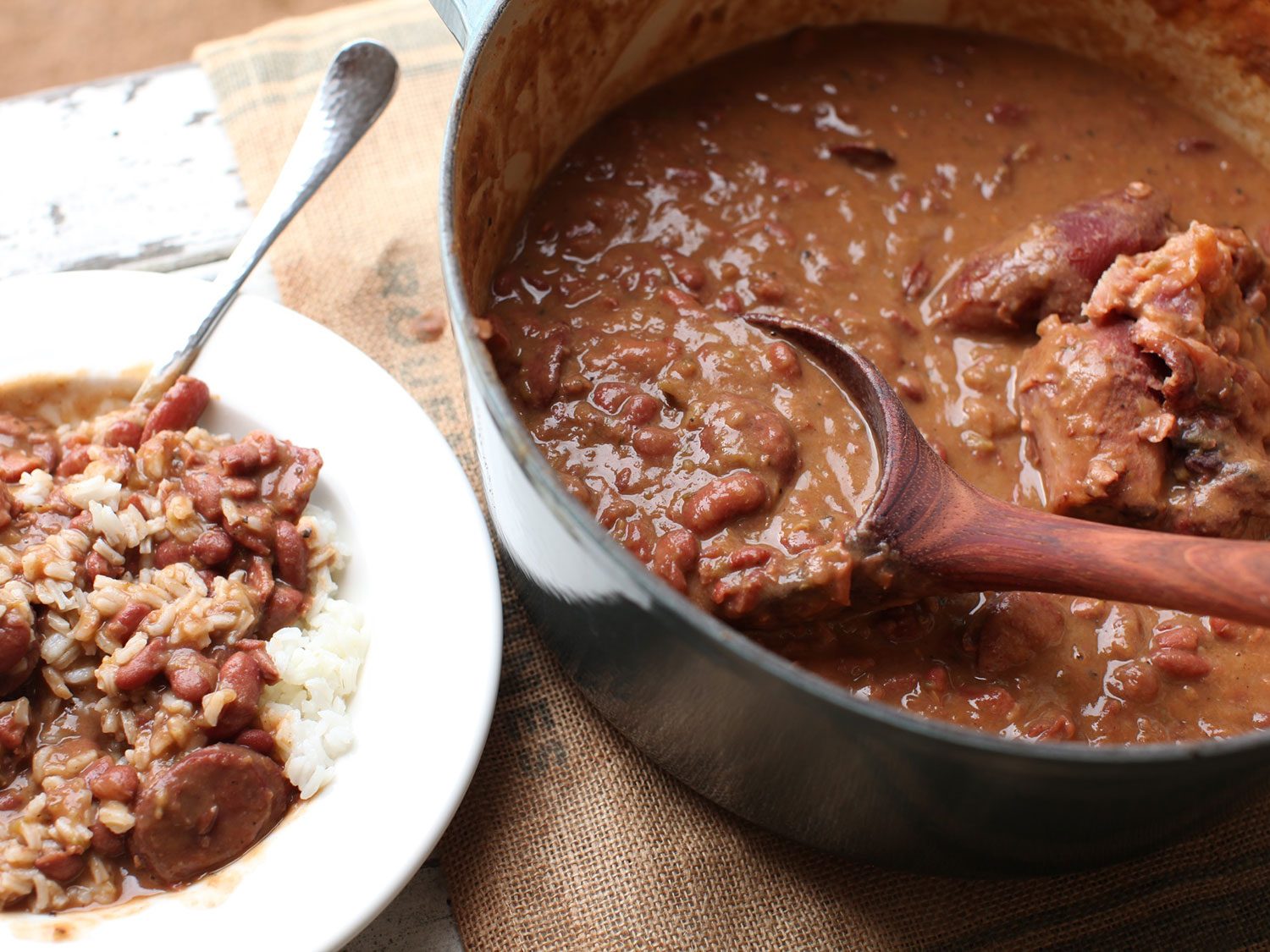 Alright, so Alicia may like pasta and vegetables and fruit and meat and bread and cheese and everything else, but she loves beans. She can sit for a full half hour*** at a stretch, diligently picking up a single bean at a time between her thumb and forefinger (the only utensils she’s currently proficient with) and carefully transferring it to her tongue, using her eight baby teeth to mash them up.

I also love beans, and it’s hard to think of a bean dish I love more than New Orleans Red Beans and Rice. It’s smoky, spicy, hearty, and supremely comforting. But, for a dish so complex in flavor, the preparation and ingredient list are pretty simple: a few vegetables to start, a handful of common pantry spices, a couple of fresh herbs, some chunks of pork, and some red kidney beans.

***It’s amazing how much time compression occurs as a new parent. I get a full half hour of quiet time?!? Think of everything I can accomplish!