If You Like Brown Butter, You’ll Love Toasted Crea… 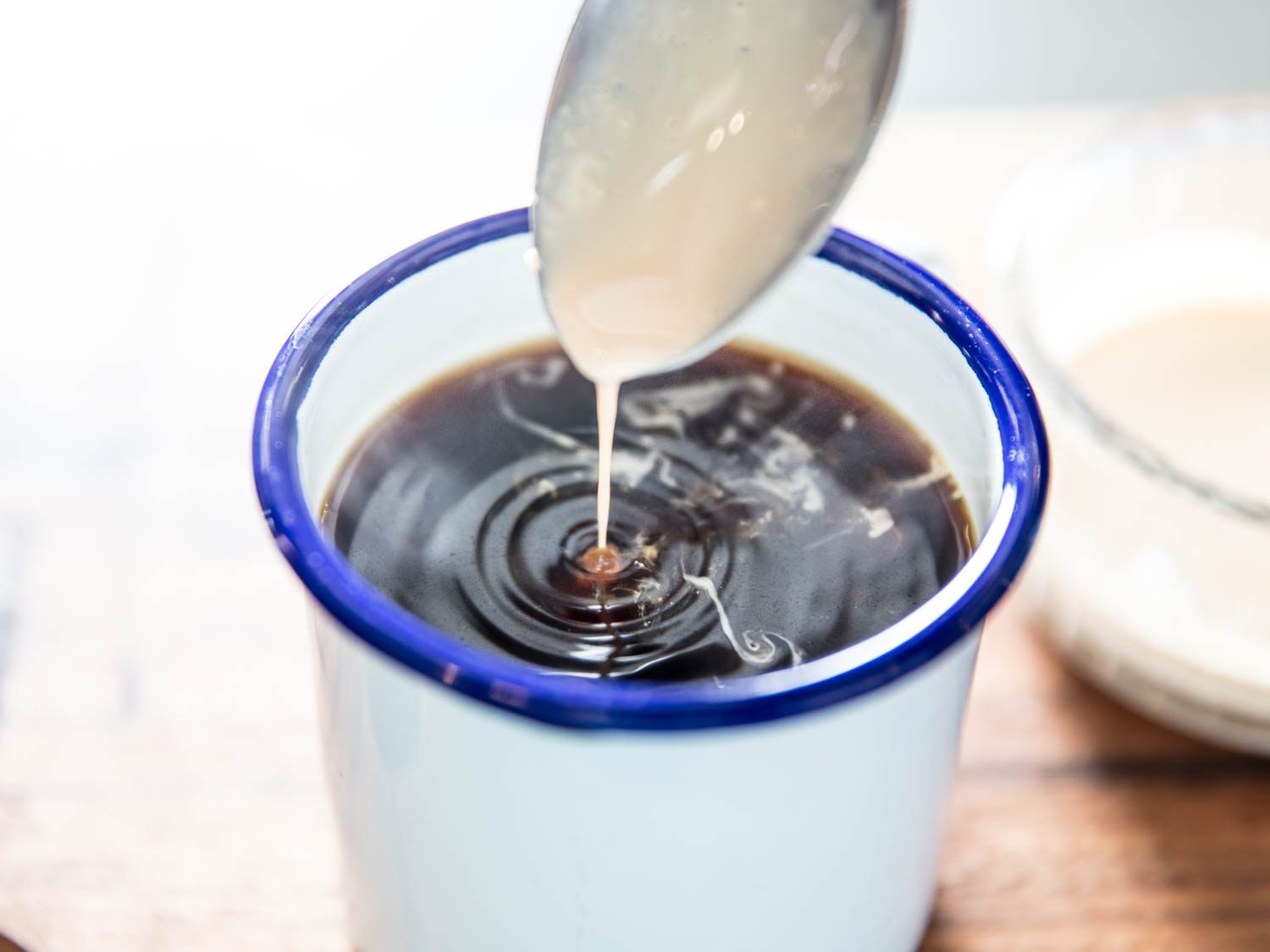 Browned butter is pretty impressive stuff. A little heat transforms butter’s coy and fresh flavor into something that’s dominating and nutty, perfect for adding depth to butternut squash risotto and complementing the natural sweetness in roasted Brussels sprouts. And luckily, this delicious metamorphosis isn’t limited to butter. Any dairy can be browned just like butter to add notes of toffee and vanilla to milk, cream, and yogurt.

There are already recipes that capitalize on the deep flavors of cooked dairy, such as lamb marinated with yogurt or goat cooked in its own milk, where the long cooking time reduces the dairy into golden, toasted curds. Separately browning dairy lets you add those deep, nutty flavors, once reserved for long-cooked dishes, to fresh, new applications.

Due to its unlimited versatility, cream is a great place to start playing with browned dairy. It can be whipped into a topping for juicy summer fruits or splashed into a White Russian for a cocktail we can all abide by, boldly going where no browned butter has gone before. 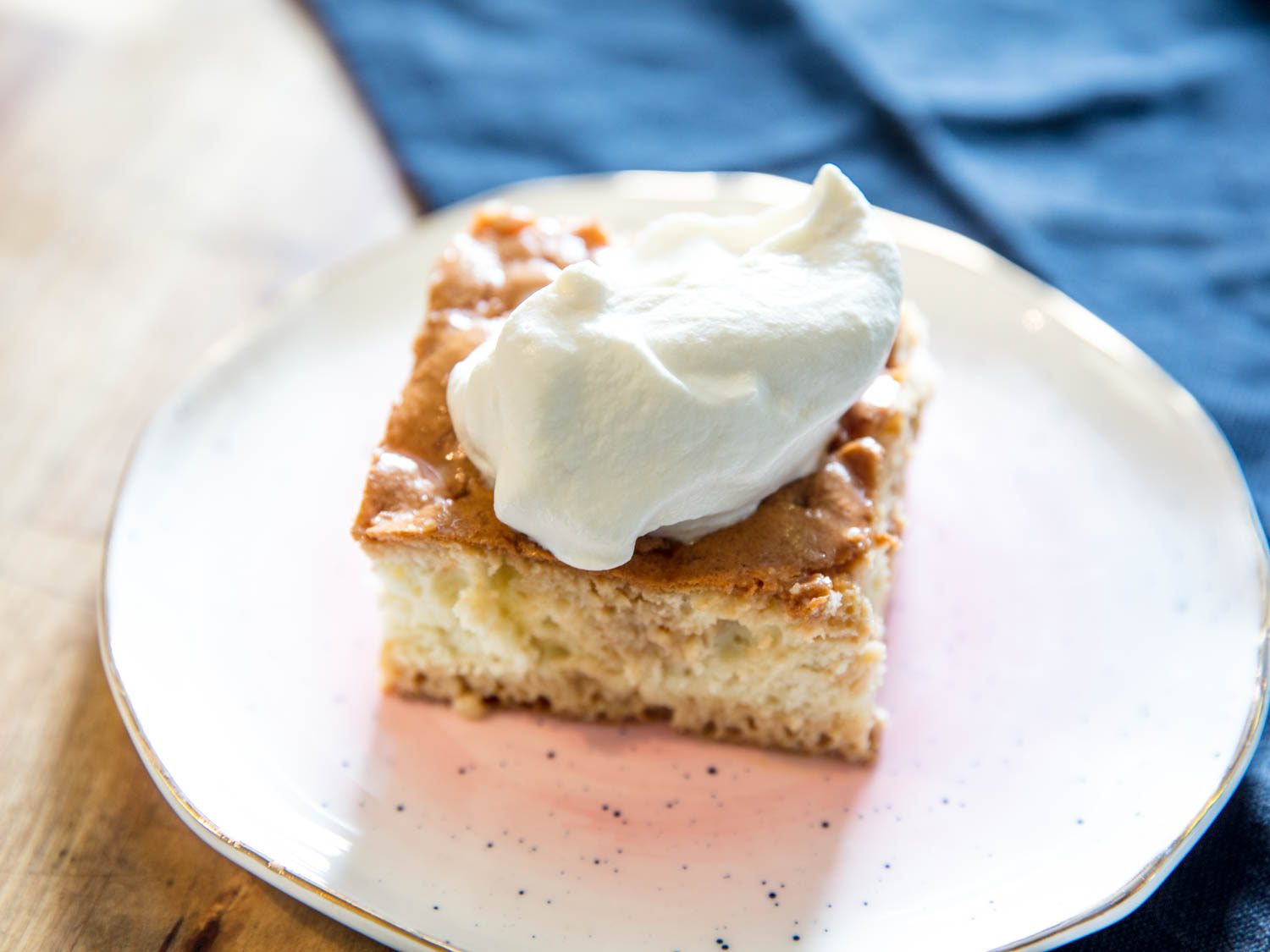 Some of the flavors in browned butter are due to caramelization, but the majority develop through the Maillard reaction, in which proteins and sugars are broken down and built back up into hundreds of new, complex flavors and aromas. It happens quickly above 300°F (149°C), making the process of browning butter simple. Once the butter has heated enough to drive off the small amount of moisture it contains (whole butter is composed of 18 to 20% water), the temperature quickly rises, allowing the butter solids to brown and infuse the butterfat with nutty flavors and aromas.

With cream, things get more complicated. Even though cream contains more protein than butter—and therefore more browning potential—it also contains more moisture, which prevents that protein from getting it on with some milk sugars so they can create beautiful brown flavors together.

Thankfully, there’s more than one way to trigger the Maillard reaction. Although browning is fastest at 300°F, it starts at temperatures as low as 100°F (38°C), but the reaction can take hours or even days. This is why canned evaporated milk has a tan color and toasty aroma, even though it’s heated to only 140°F (60°C) during processing. Cooking cream at 180°F (82°C) for 24 hours doesn’t result in much visible browning, but the development in flavor is striking. The cream takes on all the nutty aromas of browned butter, and becomes perfect for churning into the most intense butter pecan ice cream or stirring into delicate cauliflower purée. 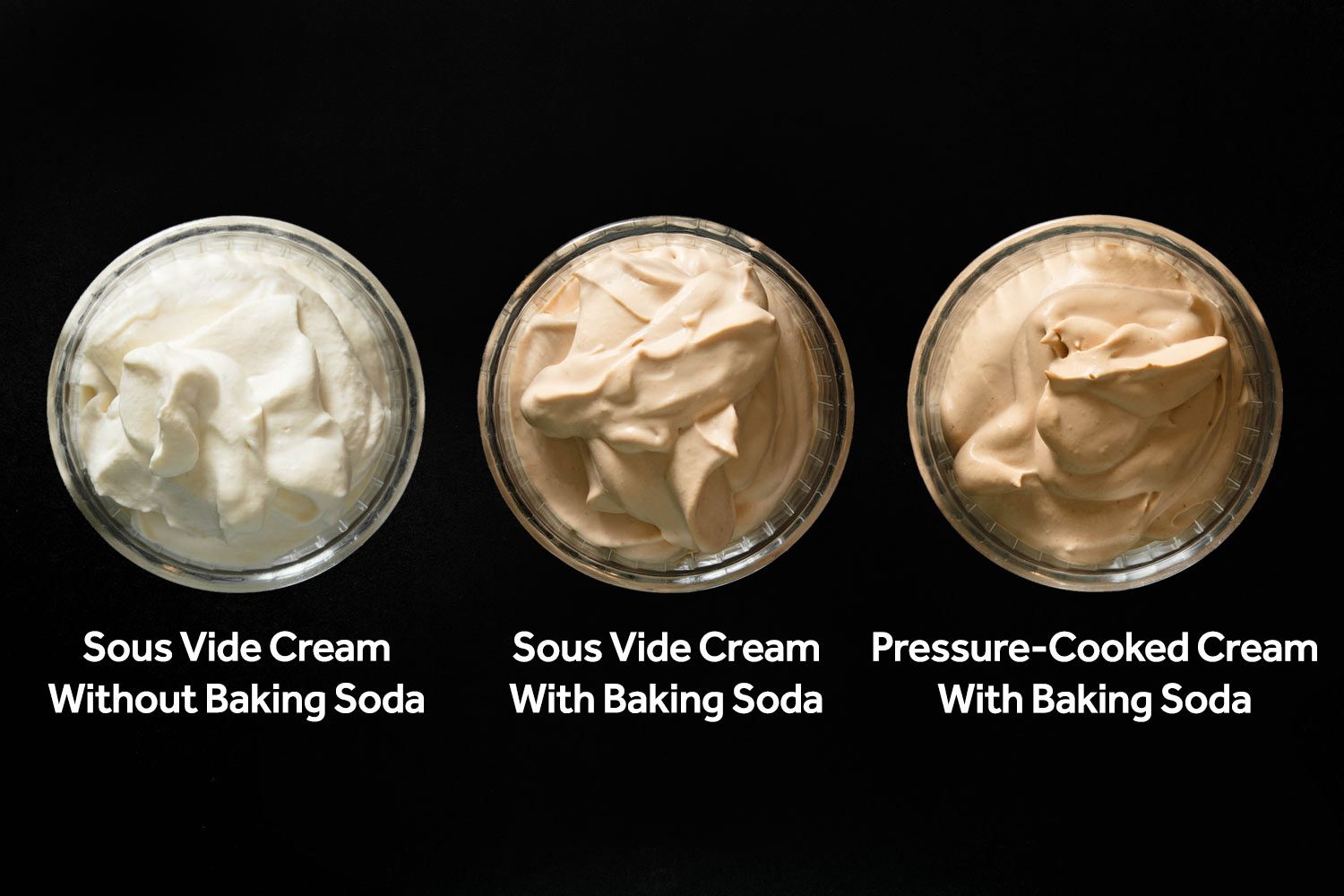 Another option is to borrow the baking soda trick Kenji uses to quickly caramelize onions and achieve extra-brown skin on roast chicken. In both these instances, the baking soda creates an alkaline environment, which speeds up the Maillard reaction—and it works for cream and other dairy, too. Baking soda is traditionally added to cajeta and dulce de leche to intensify the browning that’s already occurring through the reduction of dairy and sugar. Adding 0.25% baking soda to cream before cooking sous vide increases its browning and enhances its savory flavors, which is ideal for keeping the sweetness of a tres leches cake or flan in check. 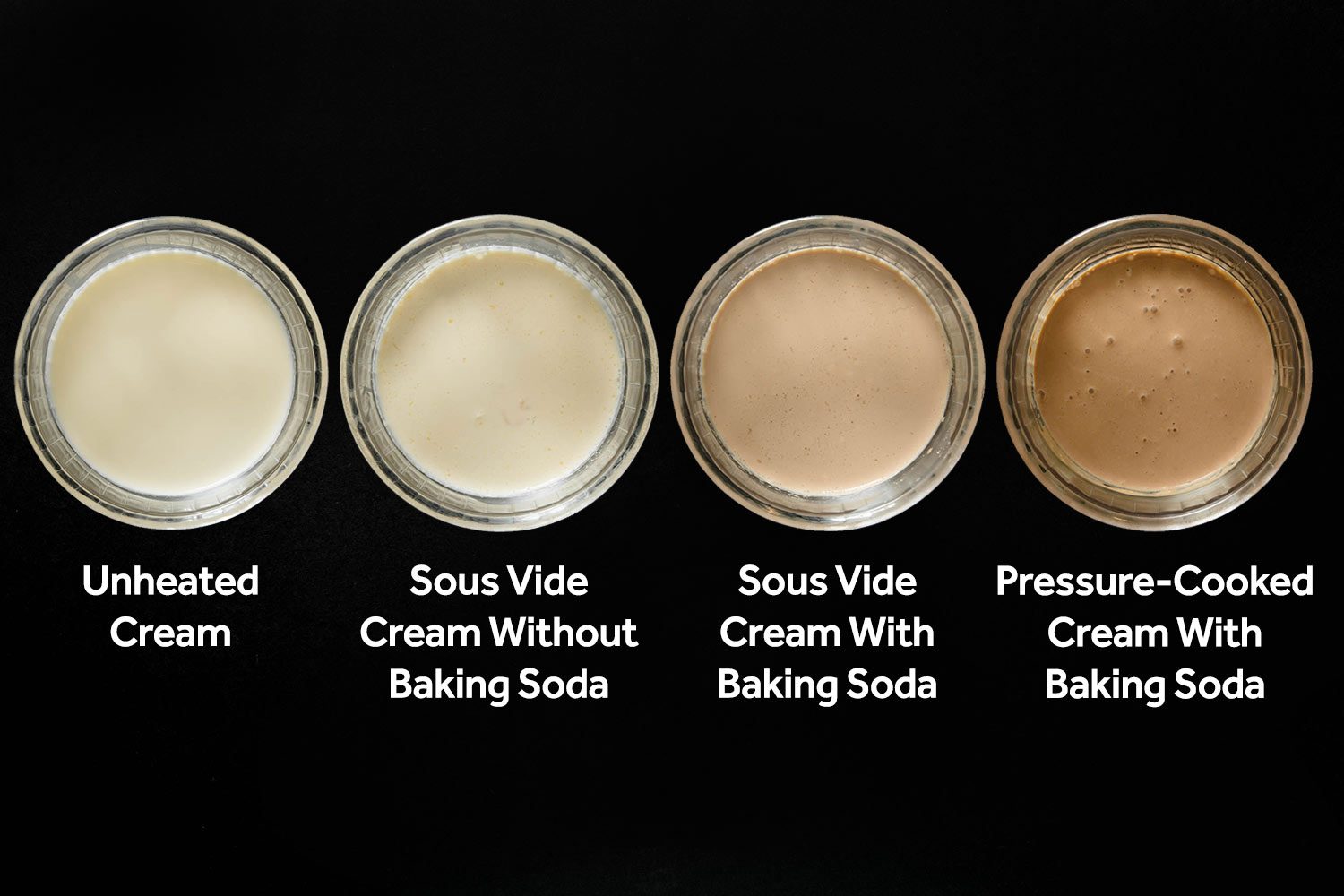 To kick browning into overdrive, Alex and Aki at Ideas in Food cook cream with baking soda in a pressure cooker, using both alkalinity and high heat to achieve maximum browning. Just like the Maillard reaction, caramelization is a function of both time and temperature. When the Maillard reaction is sped up by the baking soda and heat, it quickly outpaces caramelization, resulting in more savory aromas—less butterscotch and oak, more pretzel and coffee. A cream this dark has moved far from its sweet brown-butter roots, which makes it ideal for finishing meaty pan sauces and playing with chocolate. 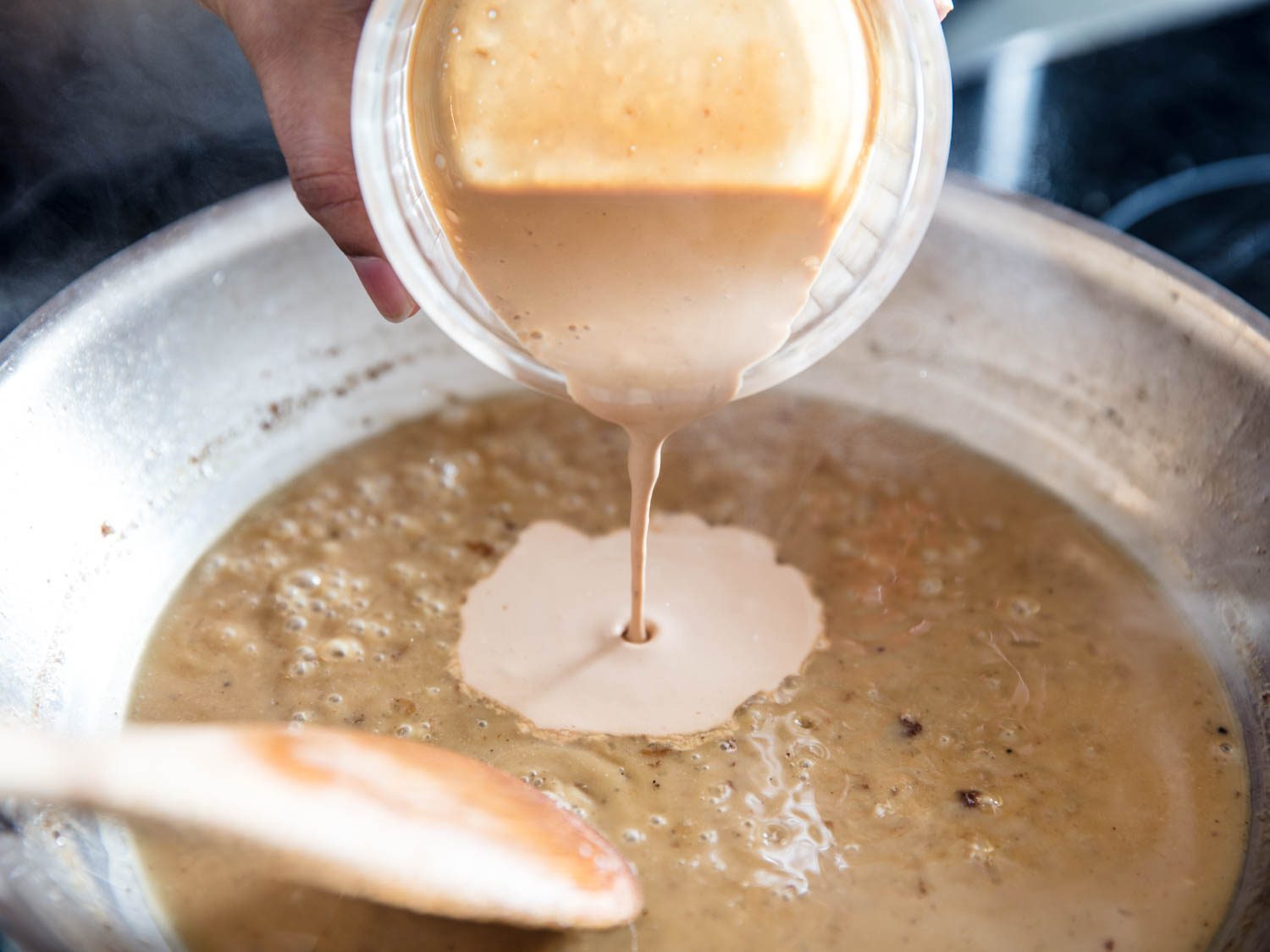 Whether you decide to go low and slow, use a little science to speed things up, or fully transform your cream in a pressure cooker, one method isn’t better than the other. Rather, each produces a different result, suitable for different uses. With these three methods for browning cream added to your repertoire, you can easily upgrade simple recipes with added depth and nuttiness.