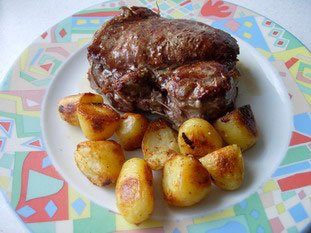 If you need to fry or sear anything a frying pan or saucepan, the temperature is likely to be high.
In particular, I have cooking red meat in mind. In this case, what should fat should we use? And at what temperature?

For our red meat, let’s imagine we want to fry a tournedos (let’s go straight for something top-of-the-range). The same goes for this as for all other fried or seared red meat, and there’s no secret: really, really hot; the meat should be seared or flash fried.

So much for the temperature, but what about the fat? For simplicity’s sake, let’s narrow this down to two possibilities: butter or oil.

Oil: No problem with this; the oil will take being heated to a high temperature. There’s a trick to knowing when it is hot enough => it will begin to give off a light smoke. Look out for this and as soon as it happens, put your meat in the pan. Do be careful, though; you need to react quickly and not let it burn and smoke too much. 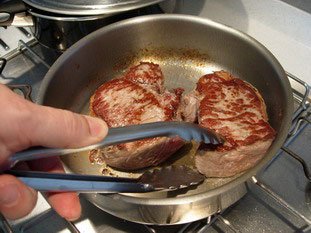 Butter: This presents more of a problem. Butter will not take high temperatures. To start with, it melts and foams, so we might go ahead and add the meat at that point. But as the temperature continues to rise, the butter will end up burning and give a very unpleasant, bitter flavour. 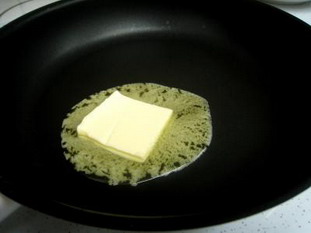 So, as you can see, if you want to cook at a very high temperature, it is better to use oil, as butter is unsuitable.

That’s all very well, but oil doesn’t taste the same as butter and doesn’t give the same flavour to the meat; generally, butter makes it taste better (yes, taste also matters). So, is there really no way to fry meat in butter? 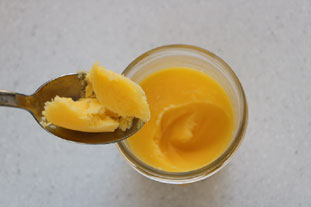 As it happens, there is – but not with normal butter. We need to use clarified butter, which is butter that has been separated off from the white milk solids, which you can see as the little bits in the photo above. These would end up burning and turning brown during frying. It is fairly simple to make and keeps very well.

There is a third way, using a mixture of the two: a little oil in the bottom and then butter added. This allows the temperature to be raised higher than for ordinary butter alone, but clarified butter is still the better option by far. 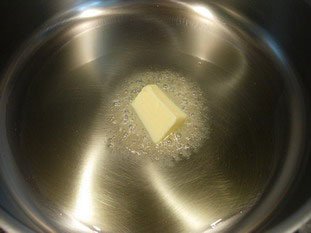 To sum up: When cooking red meat, always fry it at high temperature, and for the fat, use oil or clarified butter.

Back to top of page

I am going to a weiner roast tonight and needed to come up with something quick and easy. I love the traditional Oreo Fluff type...

Provided ByRecipeTipsWith the first bite of this unique tuna sandwich, you will agree that it is one of the best sandwich recipes...

For all of us looking for delicious chicken recipes, this terrific chicken and vegetable stir fry is not only tasty but low in saturated...

It's time to get outdoors and enjoy some fresh and healthy food! That's why this week's meal plan includes delicious options like...