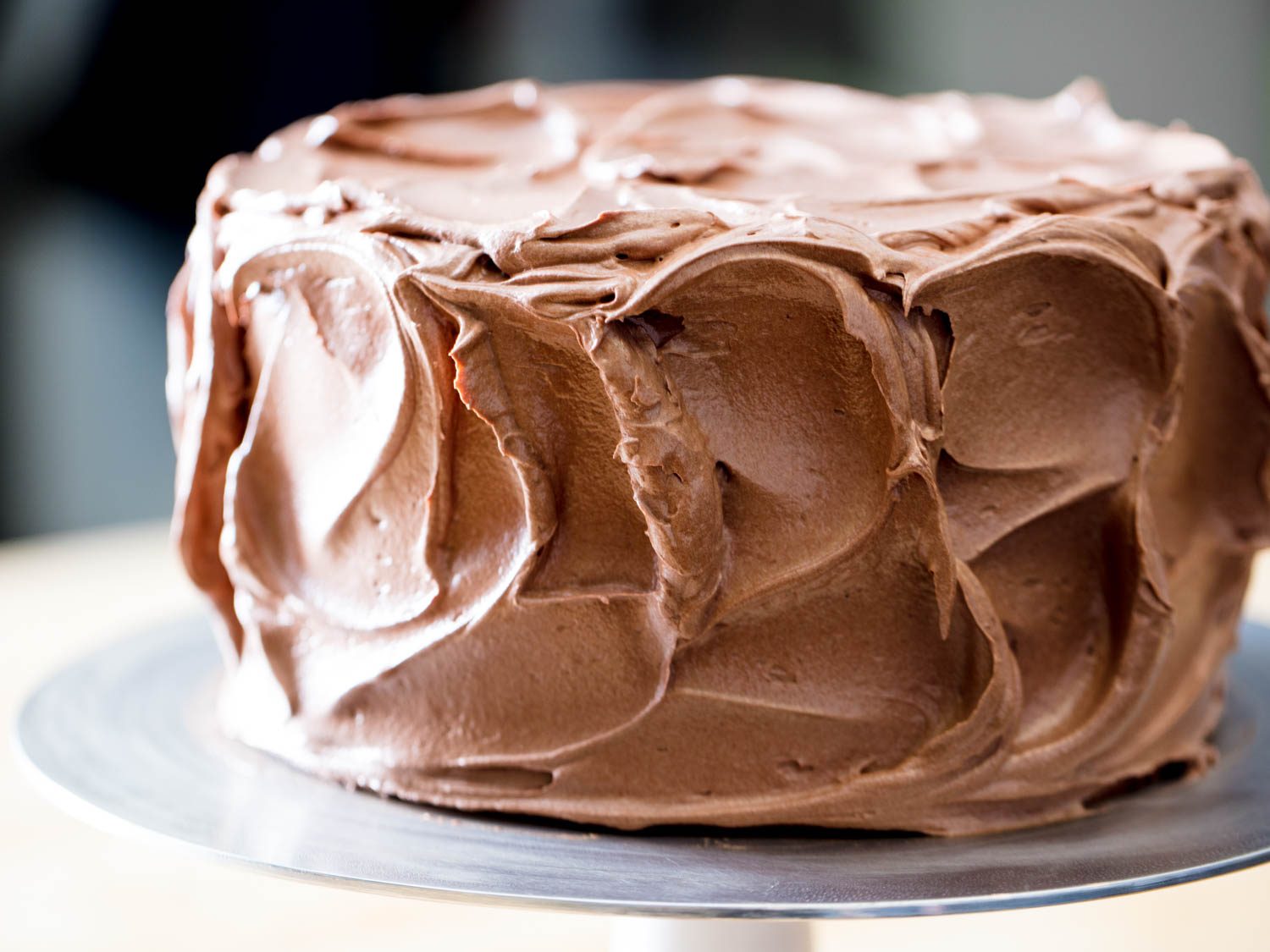 If you need to whip up a chocolate frosting on the fly, but don’t want to compromise on flavor or texture, Swiss buttercream is the way to go. It’s a favorite among professional bakers because it’s fast and easy to prepare, super stable for decorating purposes, and way smoother and airier than frostings based on powdered sugar. And, let’s cut to the chase, it tastes incredible—like a creamy chocolate mousse crossed with brownie batter, all buttery and rich.

I’ve written extensively about both Swiss meringue and Swiss buttercream, so I won’t go into a ton of detail here other than to say that my Swiss meringue is fully cooked, and significantly lighter and more stable than recipes you may have tried before. That’s because I favor a cooking style that uses more sugar and a higher cooking temperature.

This combination produces a meringue, and in turn a buttercream, that’s unusually sturdy and not at all heavy—it weighs in at just six ounces per cup. In the case of buttercream, the meringue’s high sugar content dilutes the richness of the butter, for a frosting that feels light rather than greasy.

I take the same overall approach when making a chocolate buttercream, but with a few key tweaks. Instead of plain white sugar, I start with toasted sugar, Belgian cassonade (also called candi sugar), or light brown sugar. These super-flavorful sugars add a hint of caramel or, in the case of light brown sugar, molasses, which tames the sweetness of the meringue, provides deeper flavor, and complements the earthy chocolate. It’s a simple way to build more flavor into the recipe from the ground up. 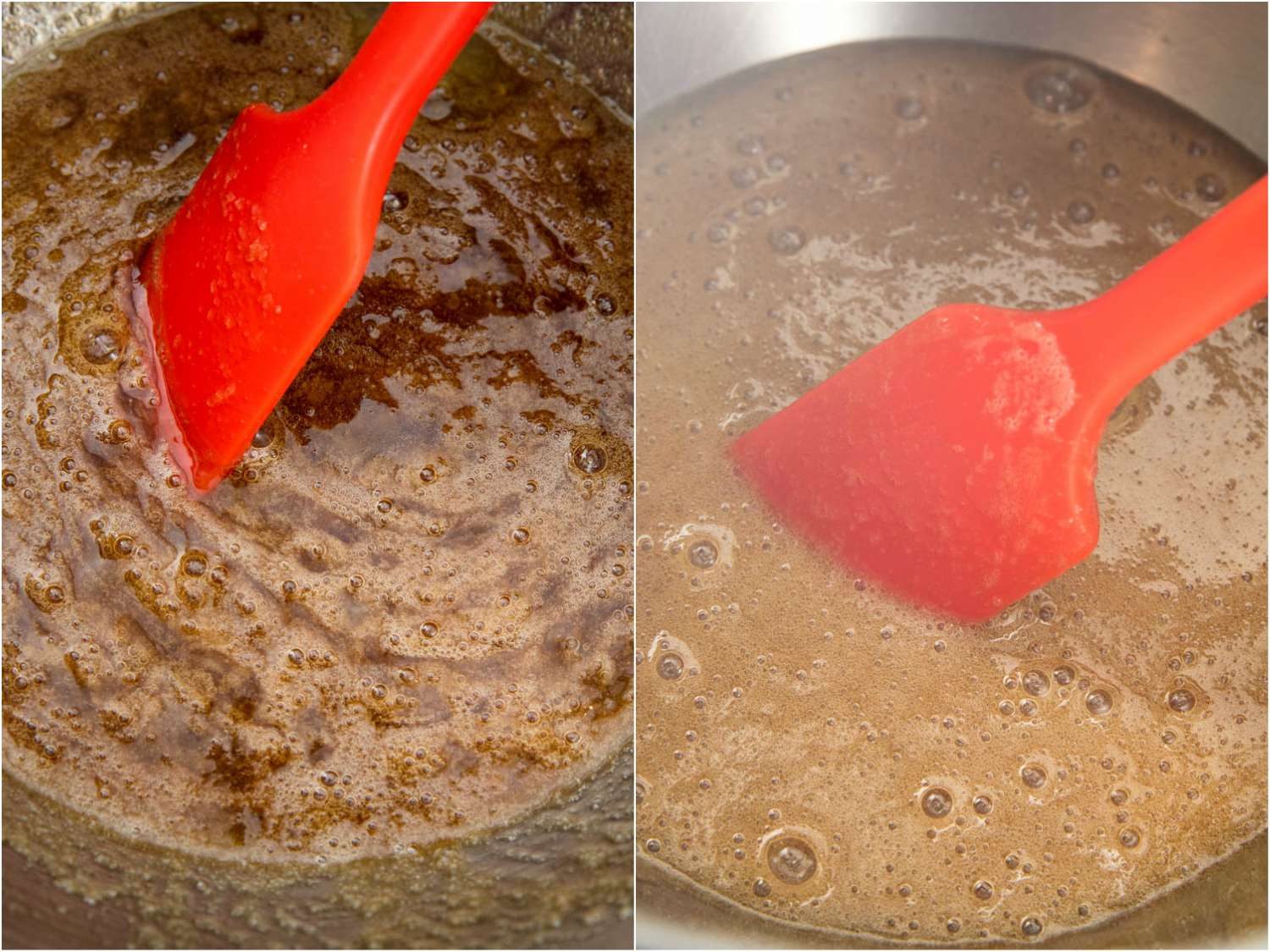 Whether you opt for a caramel- or a molasses-based sugar, the key is to cook the meringue over the water bath until it hits 185°F (85°C) to ensure it’s fully cooked despite the high sugar content, and to denature the egg whites to improve their volume as a meringue.

Transfer the bowl to a stand mixer, and whip on high until the meringue is thick, fluffy, and cooled to about 90°F (32°C). Since that’s lower than body temperature, the bowl will feel cool to the touch, but it’s warm enough to accommodate the addition of cool butter—aim for butter that’s about 65°F (18°C). 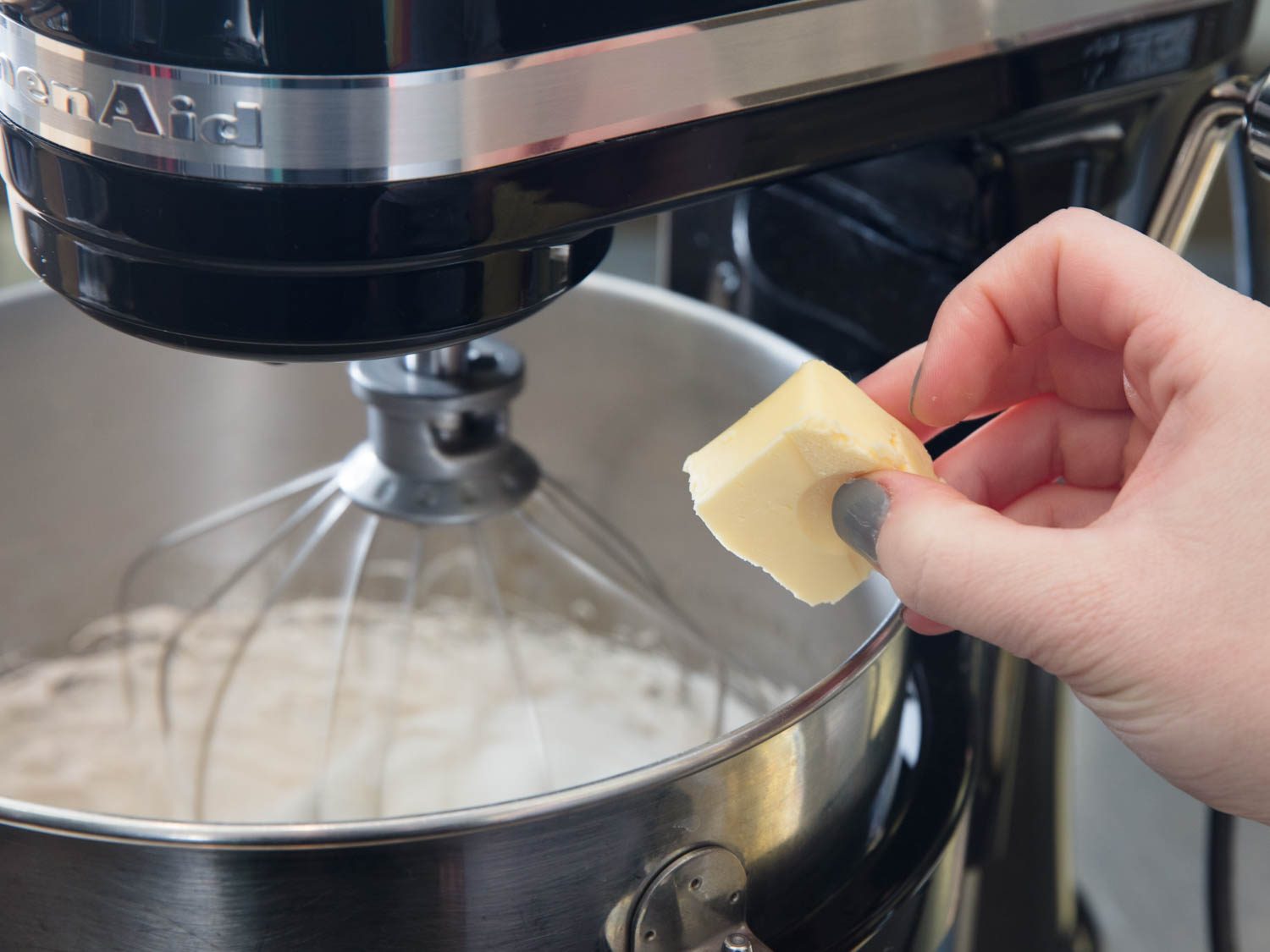 Together, the cool butter and warm meringue will average out to about 72°F (22°C), the ideal working temperature for a classic Swiss meringue buttercream. Bear in mind that there are countless temperature combinations that will bring you to that target. In my pastry days, I’d routinely use hot meringue and butter straight from the fridge, but for beginners, it’s easiest to take a path that avoids such extremes.

Should circumstance push the buttercream toward the warm or cool end of the spectrum, it will range from soft and soupy to stiff and curdled. Fortunately, these issues are never bad enough to ruin the buttercream, and they’re easy to fix if you consult my Swiss buttercream troubleshooting guide. Problems related to temperature will only compound if they’re not addressed along the way, so it’s essential that you make sure the buttercream is at a good working temperature before trying to incorporate a temperature-sensitive ingredient like chocolate. Plus, a cold buttercream may cause the chocolate to harden against the edge of the bowl, while warm buttercream won’t have enough structure to withstand the addition of warm chocolate. 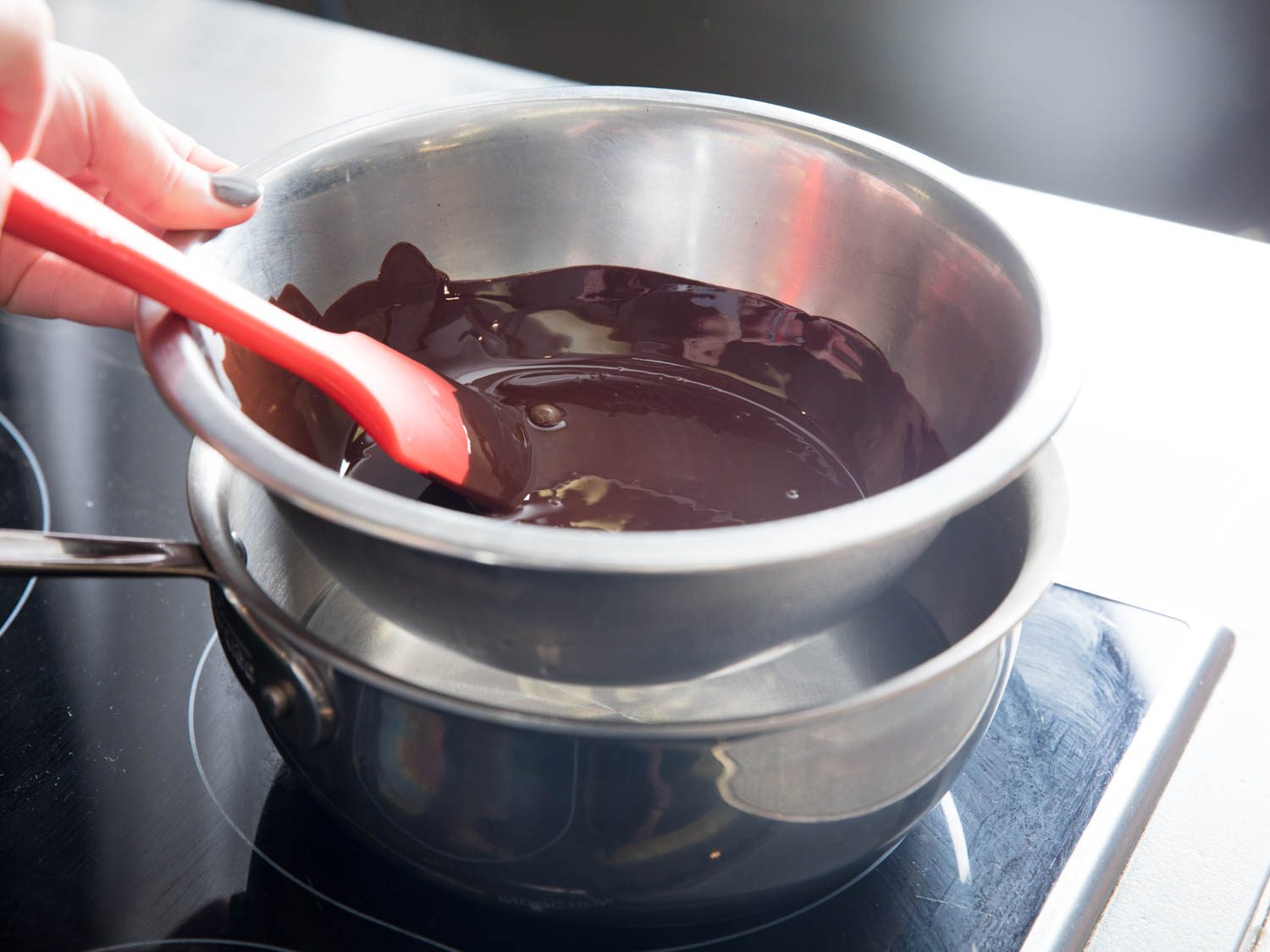 On that note, whether you want the frosting to have a dark- or milk-chocolate flavor, it’s important to start with dark chocolate. That’s because even if you use a half pound of dark chocolate, the sugar and fat inherent to buttercream will instantly dilute its flavor, making it taste like milk chocolate from the get-go. Actually getting a dark-chocolate flavor takes nearly twice as much chocolate. For that reason, milk chocolate itself is useless: too mellow and mild to overcome the sheer quantity of sugar and butter involved.

I recommend using a dark chocolate with cocoa solids of somewhere between 72 and 77%. (For this frosting, I used Chocolove 77% because it’s always on sale at my local supermarket, but it’s also very affordable when purchased in bulk online.) At lower percentages, the chocolate will contain more sugar and less chocolate, making it a poor flavoring agent. At higher percentages, the increase in cocoa butter can create a buttercream that seems stiff and greasy due to its high melting point (around 95°F/35°C).

However much melted chocolate you decide to add, it should be cooled to about 80°F (27°C) and poured into the buttercream all at once. Immediately start whipping on medium-high to incorporate the chocolate; once it looks relatively well combined, pause and scrape the bowl to be sure that there’s no chocolate clinging to the sides, where it can solidify into pesky chips. After scraping, continue whipping until the buttercream looks creamy and smooth. 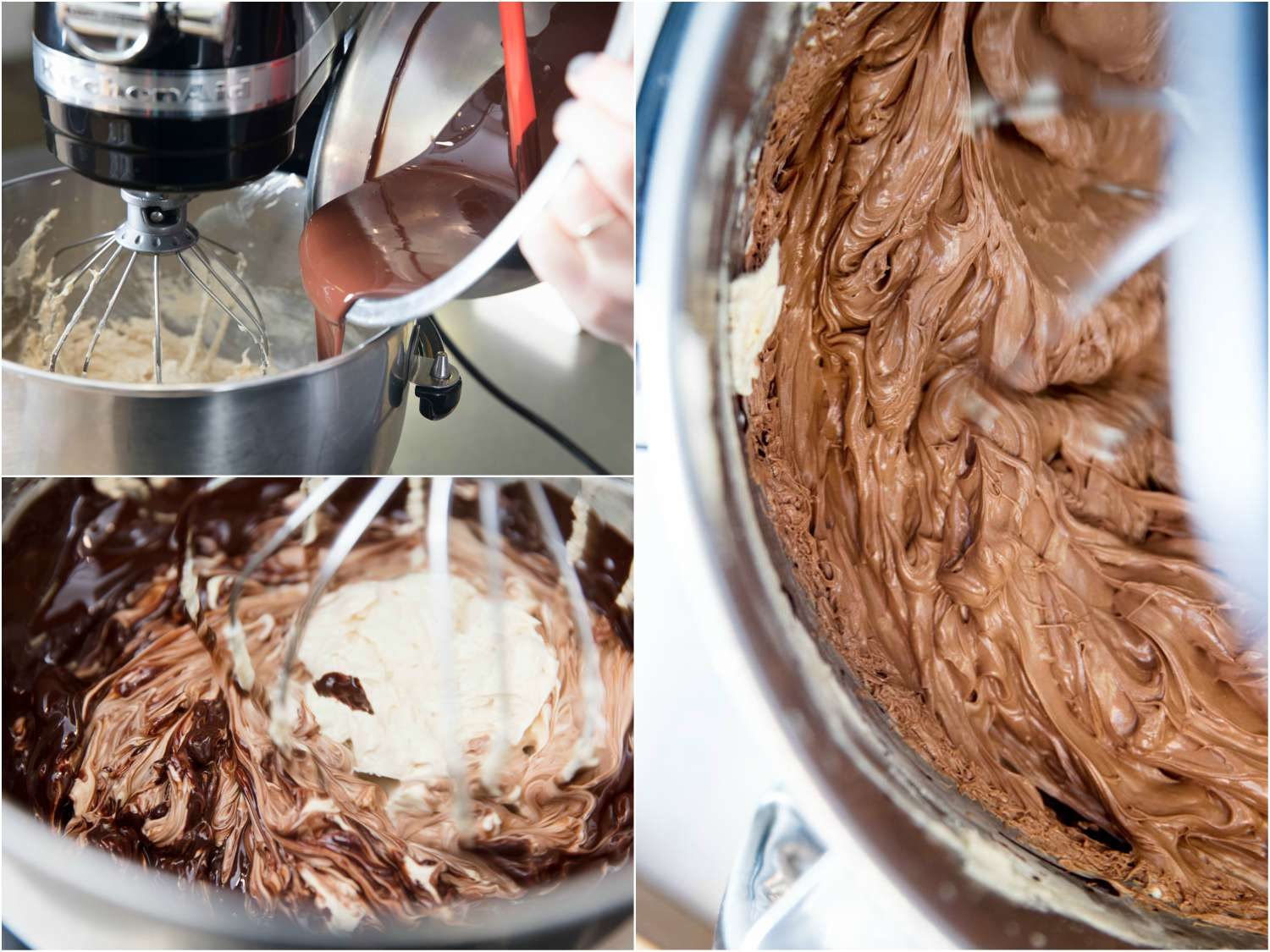 When you’re combining warm chocolate and buttercream, it’s not unusual for the temperature to skew high, which can make the buttercream a little soft and soupy. Per my troubleshooting guide, the answer is simple: Pop the buttercream into the fridge for 10 minutes, then whip on medium-high for about five minutes to homogenize its temperature and texture. Afterward, it should be smooth, thick, and wonderfully light. 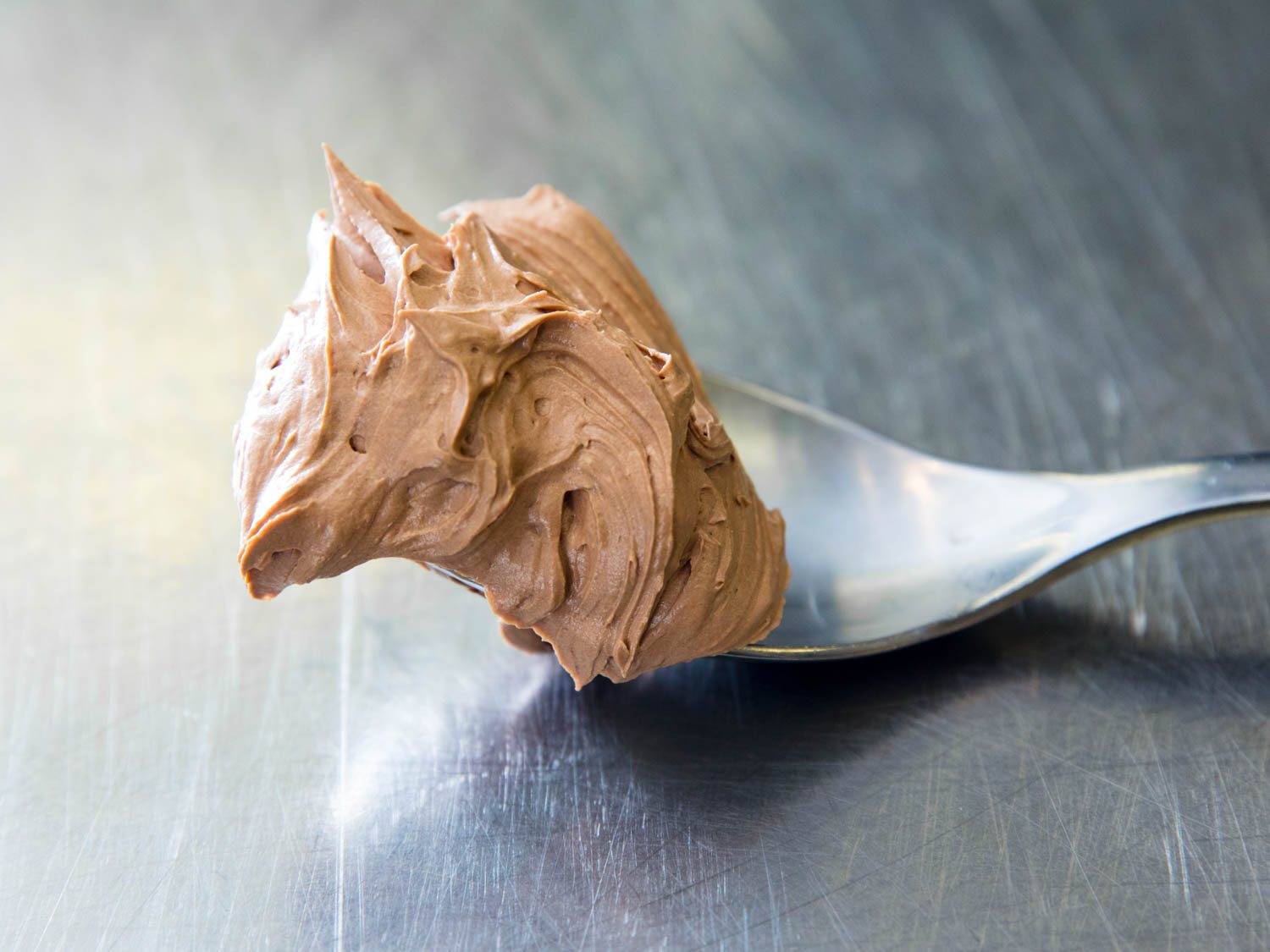 From there, the chocolate buttercream can be doctored with added salt or vanilla to taste; when aiming for a dark-chocolate flavor, I like to add a small amount of dissolved espresso powder for a little extra depth. Once you’ve dialed in the flavor, the buttercream is ready to spread over your favorite layer cake, whether that’s a classic vanilla butter cake or a fluffy strawberry torte. For more information on assembly, check out this tutorial on how to crumb-coat a cake. 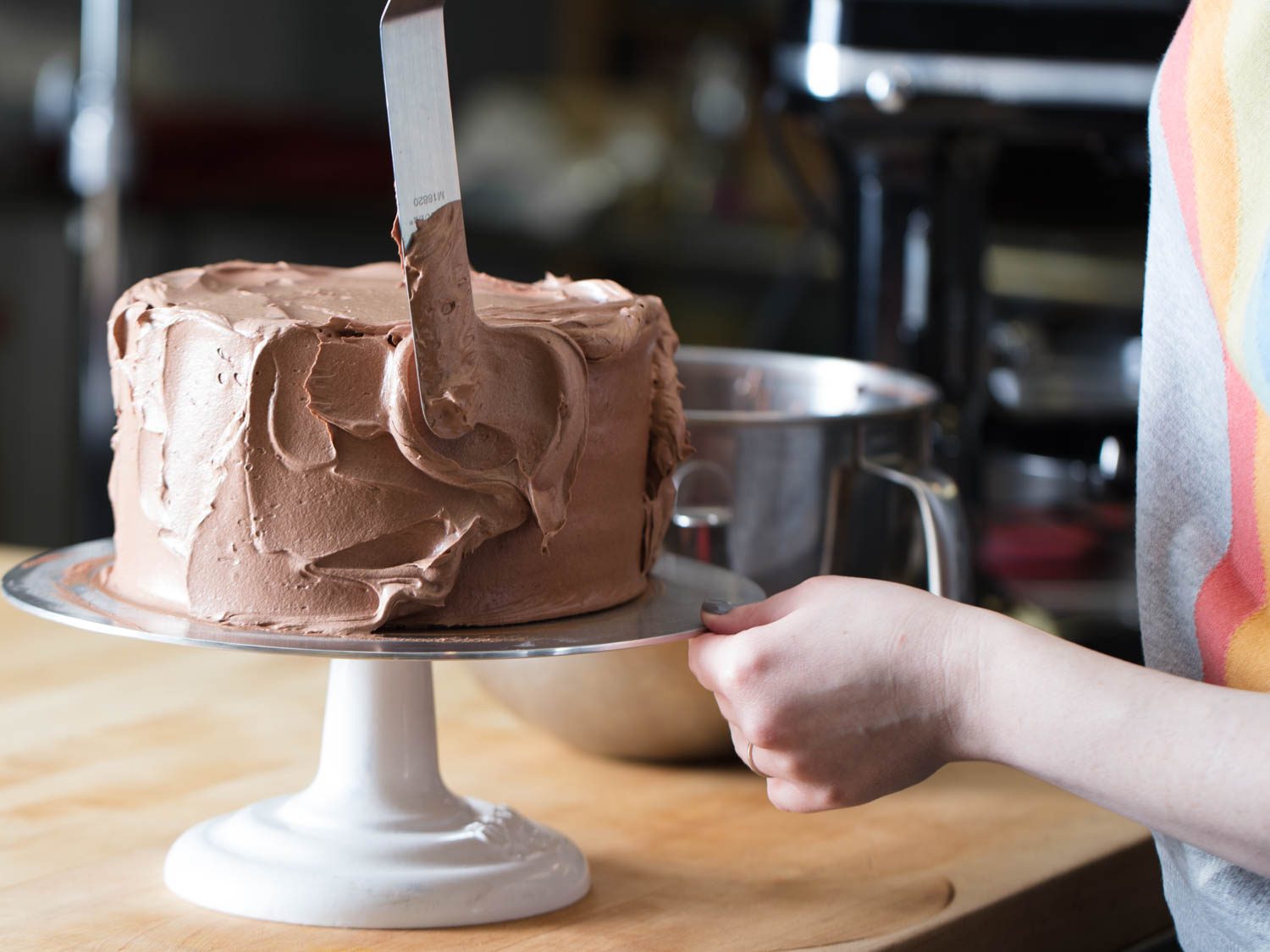 Cakes frosted with Swiss buttercream don’t require refrigeration, though it’s a helpful step to prepare the cake for long-term storage or transportation. If you do refrigerate the cake, remember that cold buttercream feels greasy and hard on the tongue, and that’s doubly true of chocolate buttercream. For any layer cake that’s spent some time in the fridge, always budget plenty of time for the cake to return to room temperature before serving.