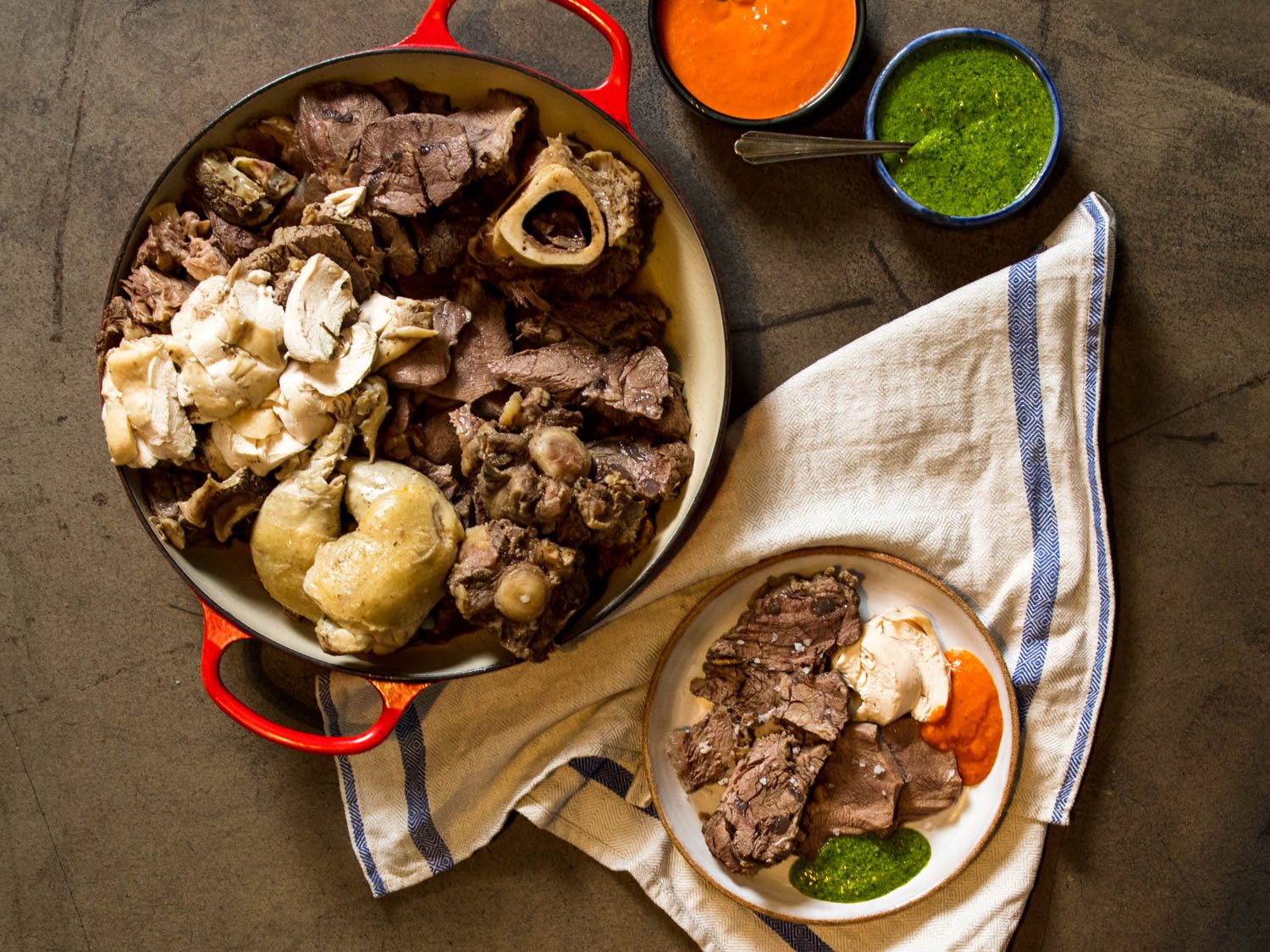 I’m hatching a plan as I type. I want to be inducted into a secret society dedicated to boiled beef. I’ve got my eyes on two right now. One of them, La Confraternita del Bollito—The Brotherhood of Boiled Meat—appeals to me because it has a nice webpage, and in the photo they’re all wearing cool red robes and have medals around their necks. These guys are fancy. I like fancy. (Plus, there seems to be a woman in the group, which means they’re inclusive. I like that, too.) The other, La Confraternita del Bollito Misto, also has my attention. They’ve added “Misto” to their name, which means they are more precise; they are not committed to a single boiled meat, their devotion is to several boiled meats. Perhaps that means they are also more legitimate, since the bollito misto both clubs worship is, by definition, an assortment of simmered cuts.

Membership in either one would be cool, but, if I’m being honest, they’re both just my backups. I can’t help but feel a little disappointed that each of these brotherhoods thought it was a good idea to publish websites about themselves. What kind of secret society does that? Not the kind I aspire to join.

While I have no proof, I suspect that a truly secret Confraternita del Gran Bollito Misto Piemontese exists. Such a cabal would know to keep their existence off the internet. If you’re out there, Brotherhood of the Great Piedmontese Mixed Boiled Meats, know that I am preparing to join you.

First, I’ve been studying your mysterious arts and have been working on a version of my own. I know that a true Gran Bollito Misto Piemontese must be made with no fewer than seven cuts of beef, including parts like the tenerone, punta di petto, and cappello da prete. It doesn’t matter that some of those seven cuts don’t have equivalents in American butchery. I know enough to fill in the blanks with what I can get—cuts like short ribs, brisket, sirloin flap, shanks, and chuck. They’re the same collagen-rich parts that you’d use in a beef stew, the sort that start out tough but grow more and more tender as all that connective tissue melts into soft and sticky gelatin. 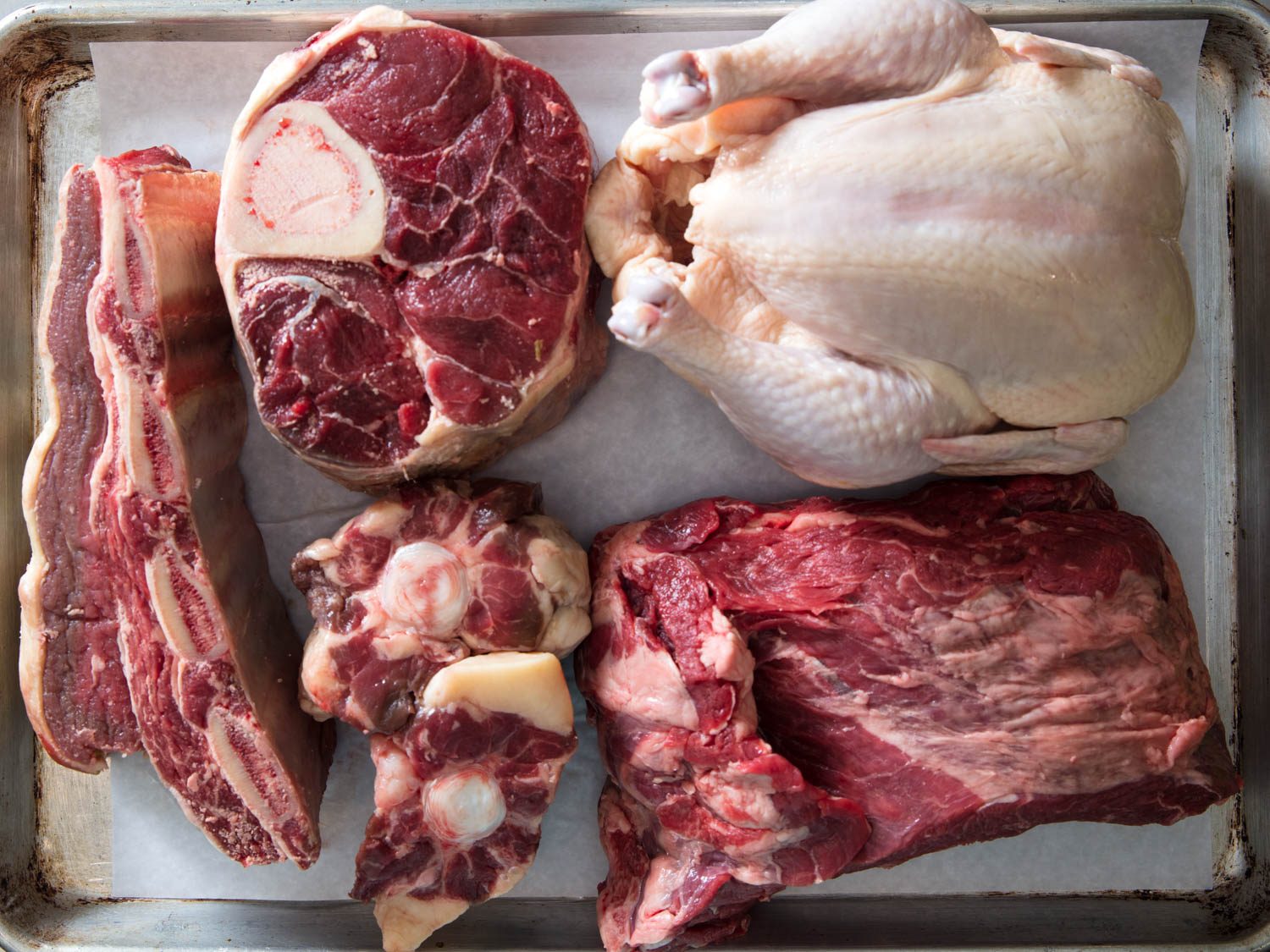 Then, there are the seven embellishments: the head, the tail, the foot, the tongue, plus a stewing hen, cotechino sausage, and more. Living in a country where some of those things are hard to find, and being a boiled-beef acolyte with a serious practical streak, I’ll use what I can find. The hen, for sure, plus the tongue and oxtail if possible. Cotechino, that gloriously fatty and gelatinous pork sausage, is a longer shot. I might be able to get it in early January, when some of the local Italian markets stock it to be served as part of a traditional Italian New Years dish with lentils, but the rest of the year I’ll likely have to do without. 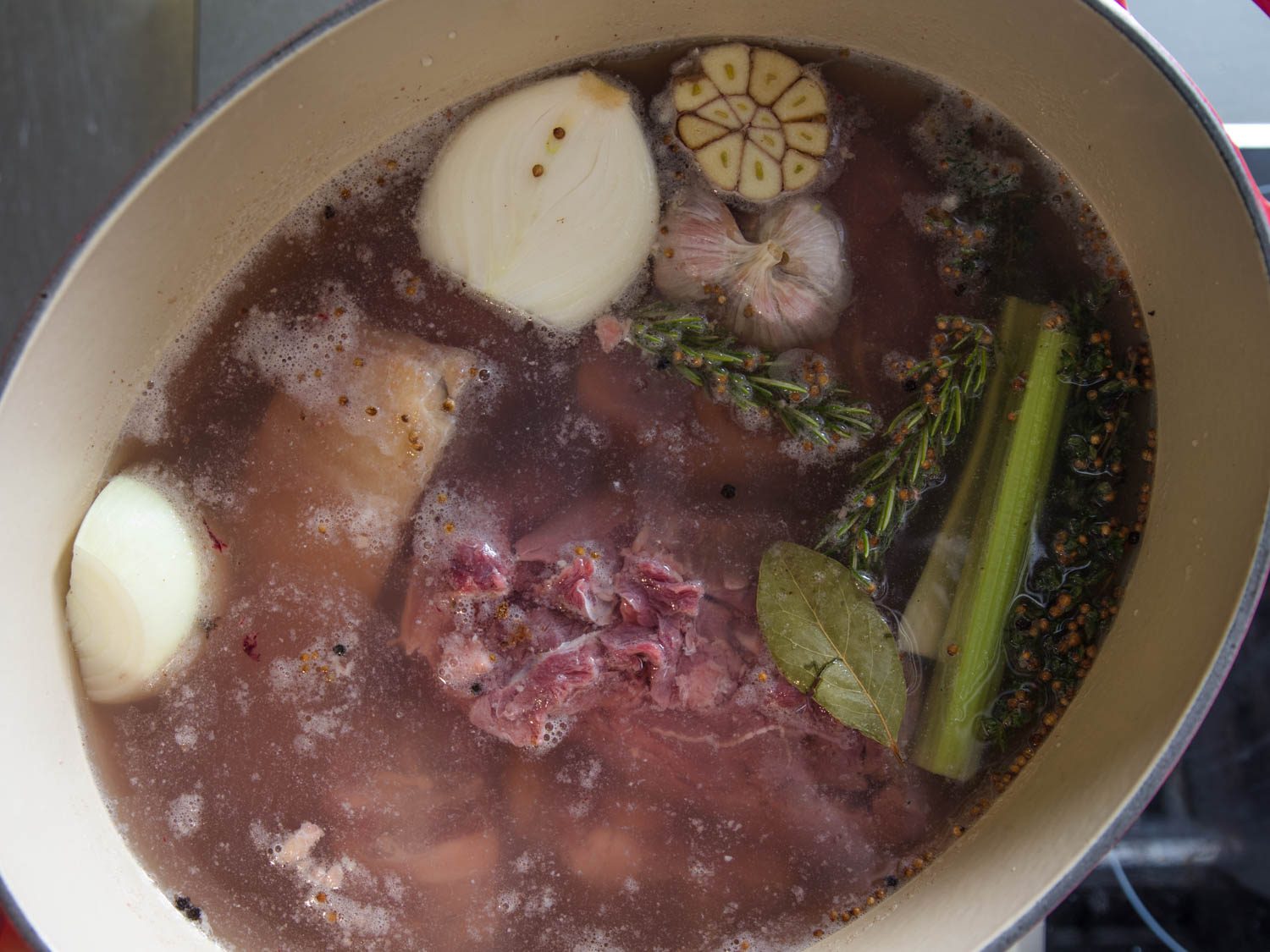 Some experts insist that all these meats and accoutrements should be cooked in separate pots, allowing each one to reach its own point of perfect doneness. I’ve changed that up a bit. First, since the beef cuts take several hours to slowly cook, I start them all a day ahead if possible, placing them in a single Dutch oven or pot, along with aromatic vegetables, herbs, and a few whole cloves. The meats don’t all cook at precisely the same rate, but most are close enough that they’ll become fork-tender at around the same time. To make sure nothing overcooks (because yes, you can overcook stewing beef), I just transfer whichever are done first to another pot, along with enough broth to keep them moist. This allows me to keep simmering whichever cuts need more time until they, too, are tender. 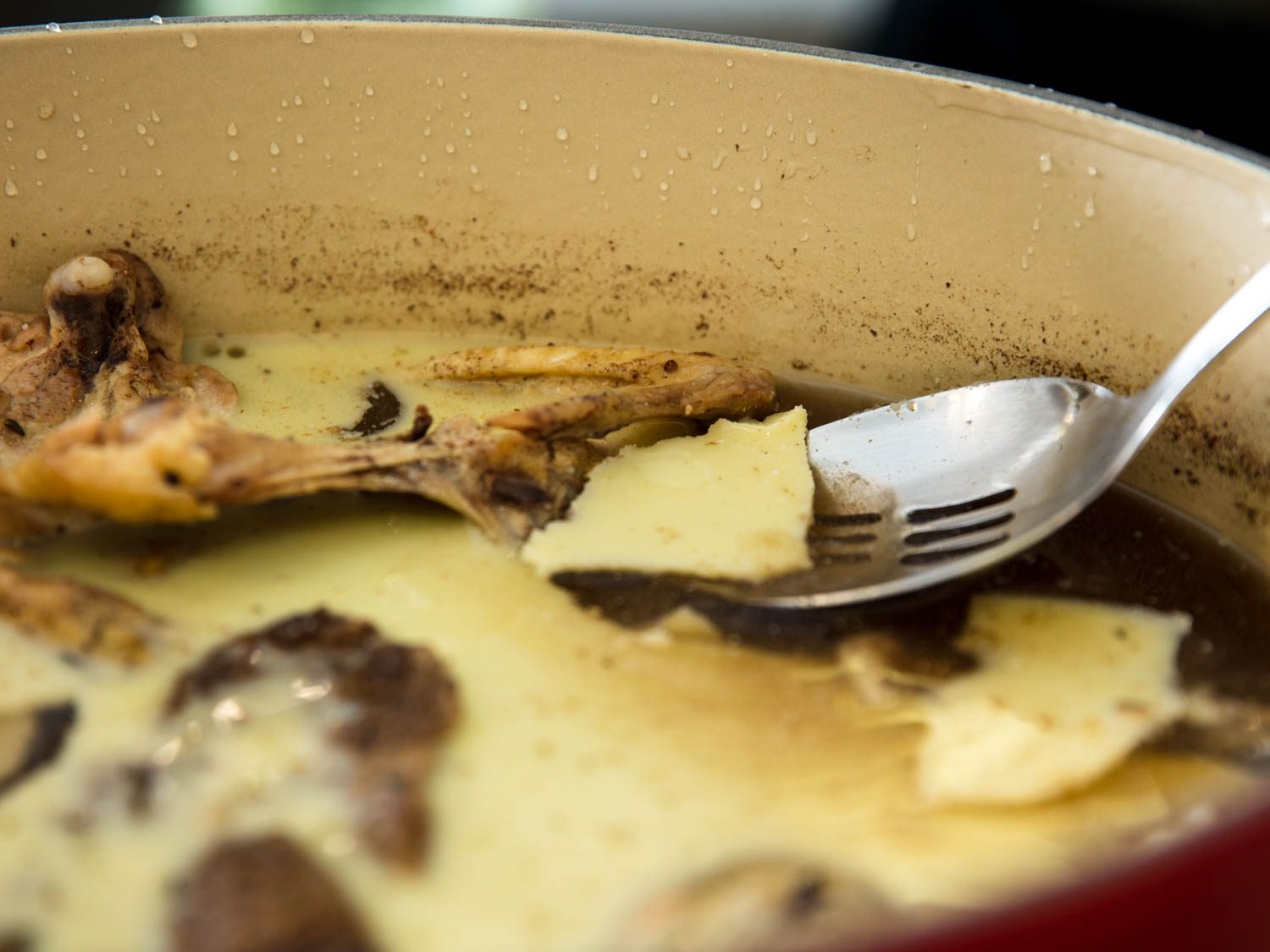 For the last two hours of cooking, I add the legs and back of the chicken, which don’t need to cook as long as the beef, but still get better after they’ve spent at least an hour or two simmering. At this point, the whole thing goes into the fridge to cool. All the rendered fat from the beef and chicken that is floating on the surface will solidify, making it easier to remove. 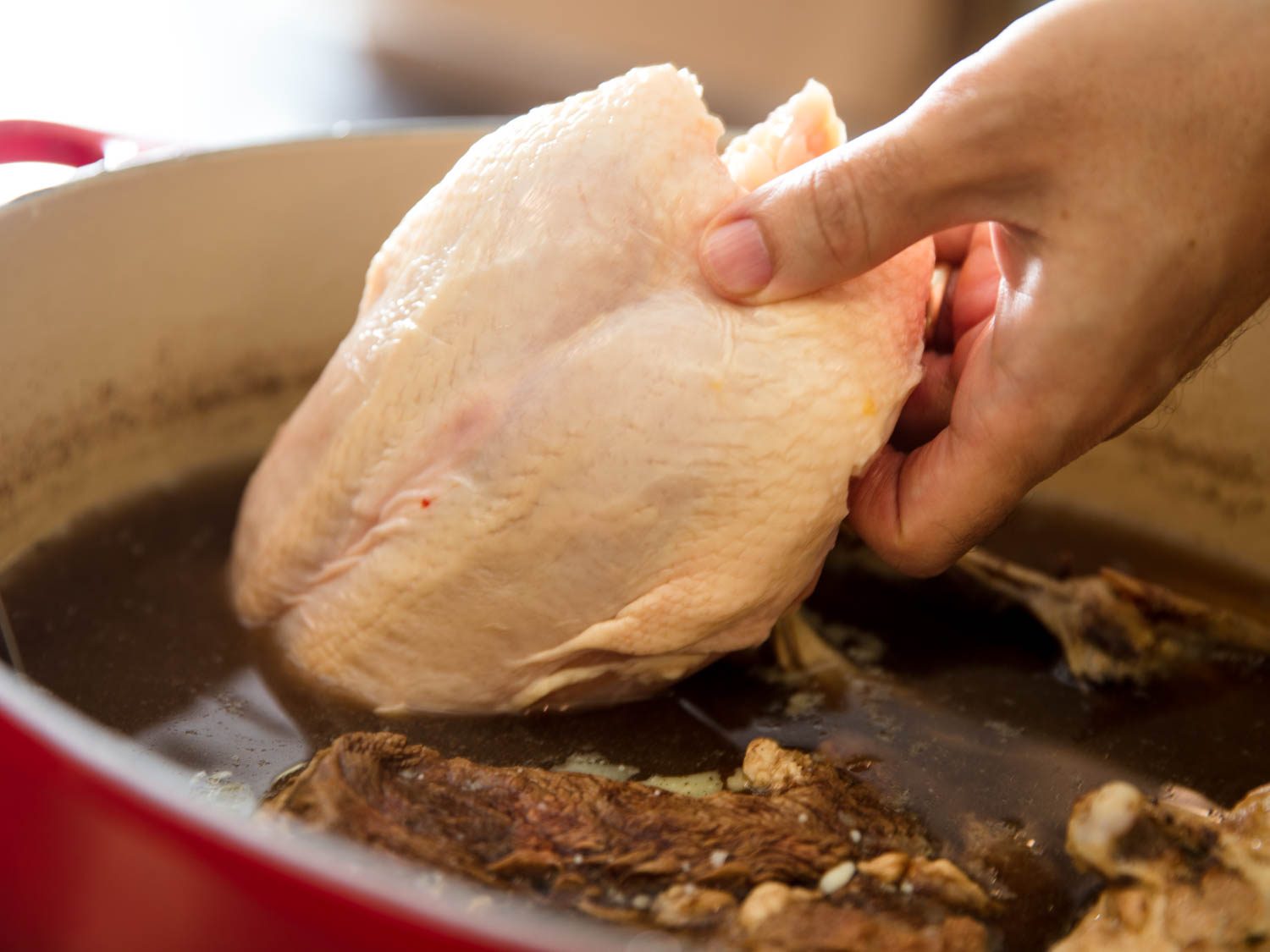 The next day, when I reheat the meats, I add the reserved chicken breast, allowing it to poach as I hold the broth at around 150°F (65°C). This is basically the cold-poaching technique for chicken that I’ve written about before, and it guarantees white meat that is much more tender and juicy than what you’d get if you simmered it at a higher temperature. As soon as the breasts are cooked through and the meat is reheated, it’s ready to serve.

Through my research, I have also learned of a whole pork loin that is often roasted and eaten alongside all those boiled meats. I tip my hat to anyone so dedicated to meat that they think a mountain of boiled ones should be accompanied by a roast that can, on its own, feed a large family. But as much as I love a good roast pork loin, I feel like the boiled meats more than deserve a moment in the spotlight by themselves. After all, how often does anyone really celebrate boiled meats? Whatever they lack in a crispy brown crust and deep roasted flavor, they gain in absolute succulence. This is meat that slides apart into jiggly fatty chunks, and then melts in your mouth.

Finally, there are the seven sauces: a contrasting array of dips to grace the meat. Herbaceous salsa verde. Tomatoey salsa rossa. Pungent horseradish sauce. Slightly less pungent mustard sauce. Sweet and fruity mostarda, which isn’t pungent at all (despite what the name suggests, it contains no actual mustard). Sweet honey sauce. I will likely never get around to serving this meal with all seven sauces when just a couple do more than enough to make the meat more interesting. For my money, the two I would focus on are the salsa verde and the salsa rossa. 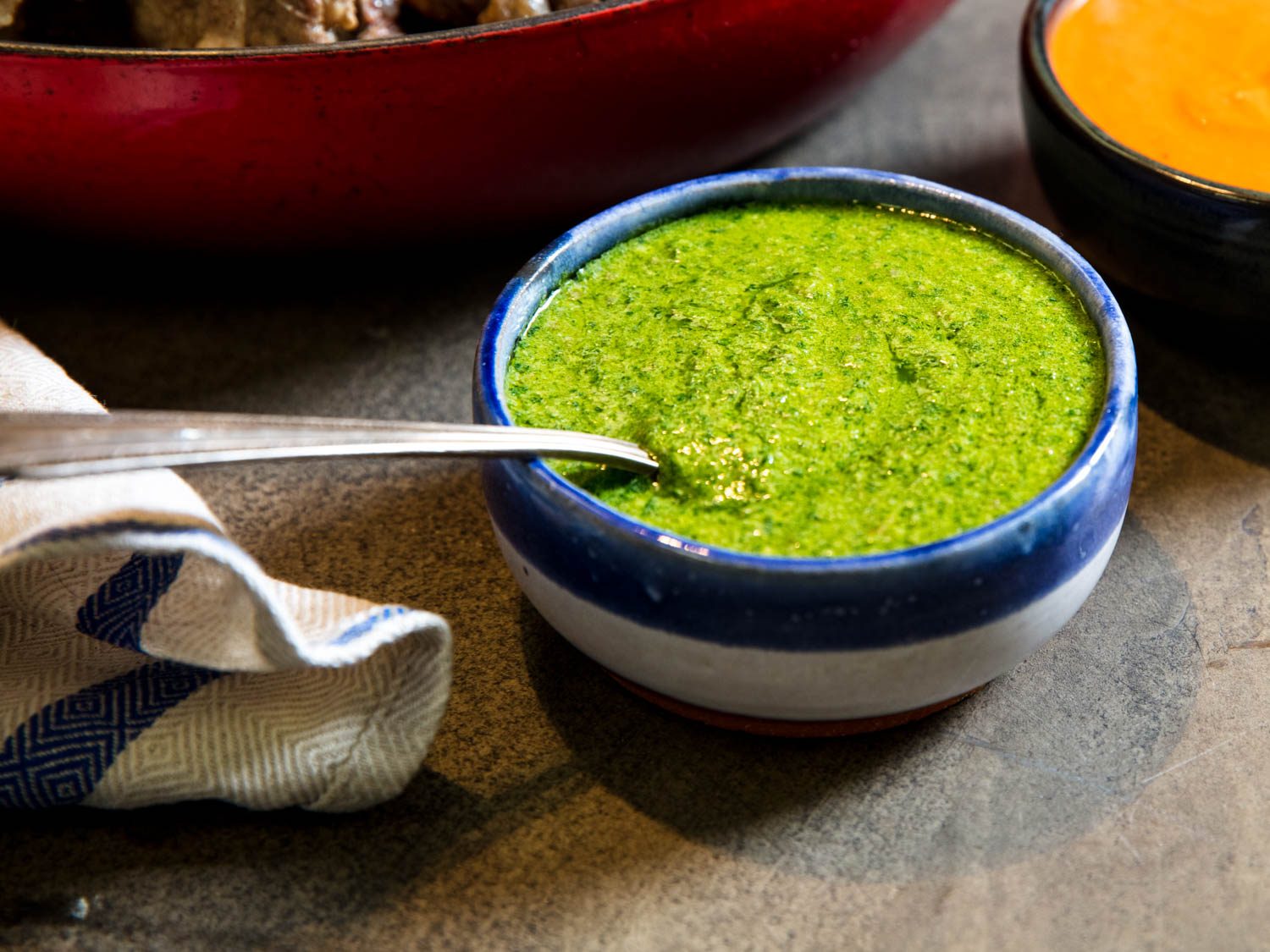 For my salsa verde, I follow an old Italian approach by blending a hard-boiled egg into the mixture of parsley, garlic, anchovies, capers, olive oil, and lemon juice. The egg helps to create a more emulsified, creamy sauce, and also adds a richness that’s hard to identify unless you’re familiar with such arcane tricks. 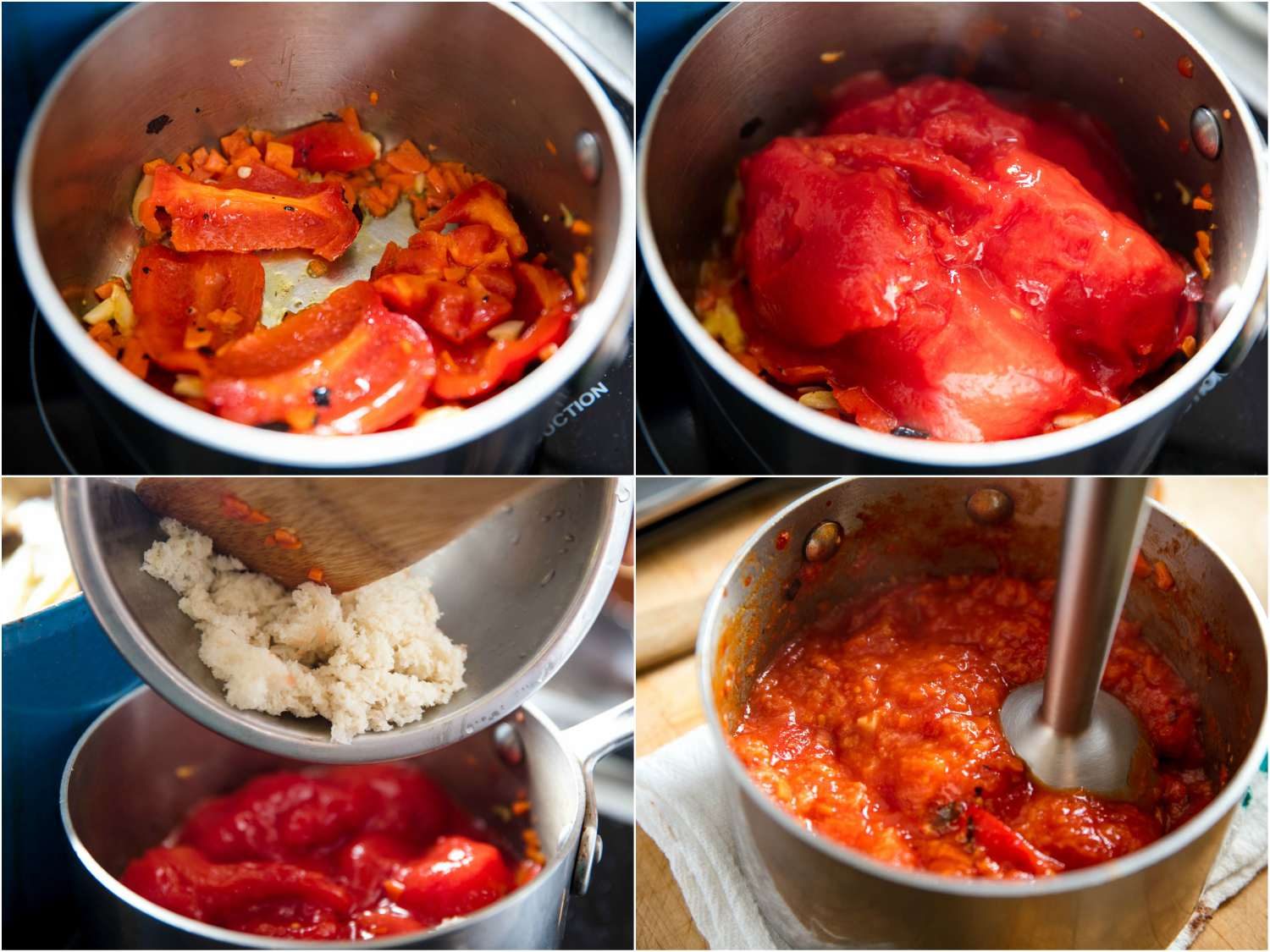 I’ll admit to kind of making up my recipe for salsa rossa, sometimes also called a bagnetto rosso, because—after reading dozens of recipes in Italian—I failed to find a consistent thread from one to the next. Most have tomato, some have bell pepper. Some have herbs, some don’t. Some are spiced, some aren’t. I borrowed ideas from various renditions I found here and there, and then created this creamy bright orange number. It’s flavored with tomatoes and a roasted red pepper, and blended with sautéed carrot, onion, and garlic. I then enrich it with grated Parmigiano-Reggiano cheese and thicken it with a panade made from bread and white wine vinegar. Think of it sort of as a smooth tomato sauce with a vinegary punch. 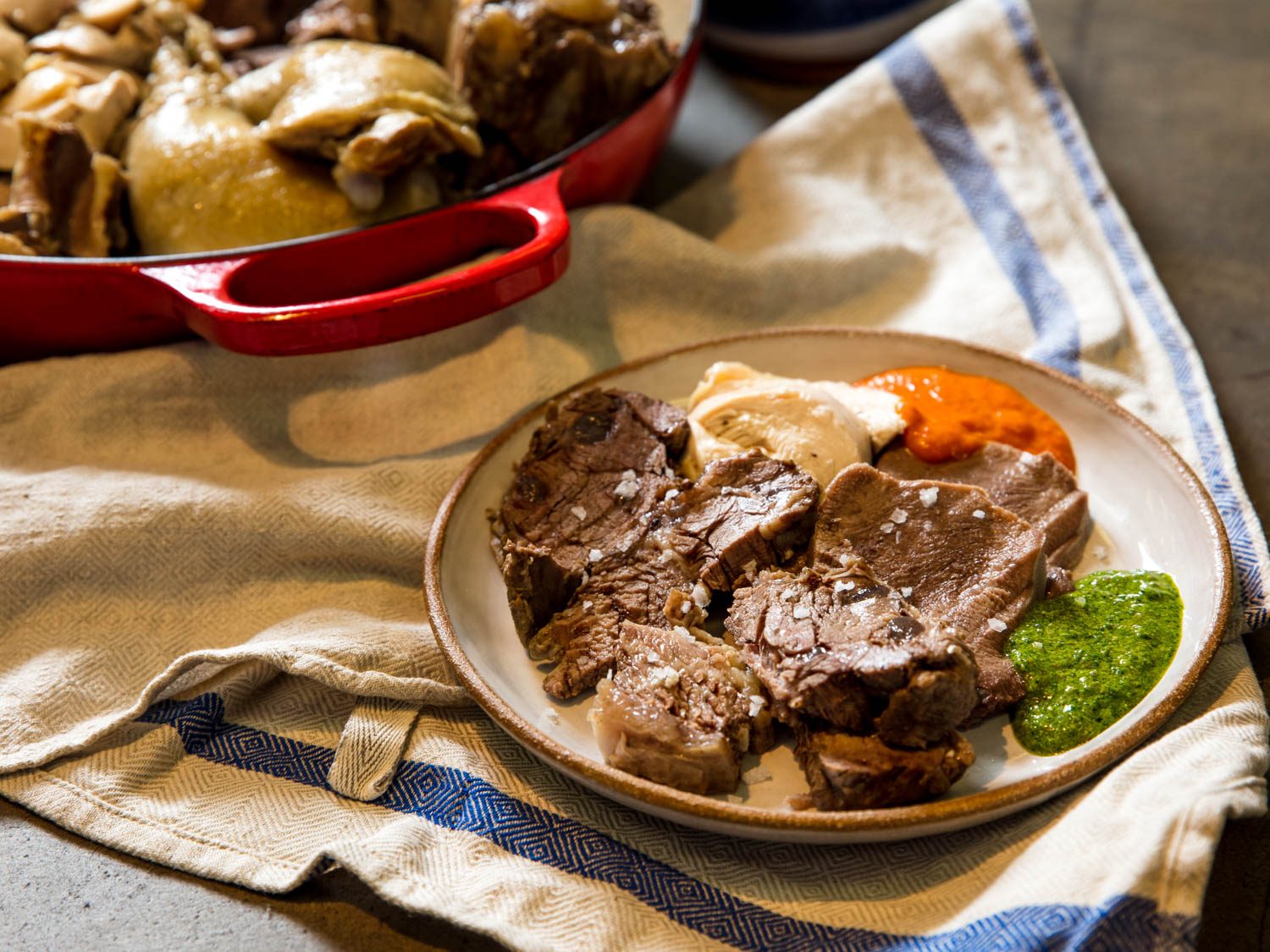