16 Vegan Soup and Stew Recipes to Warm You Up 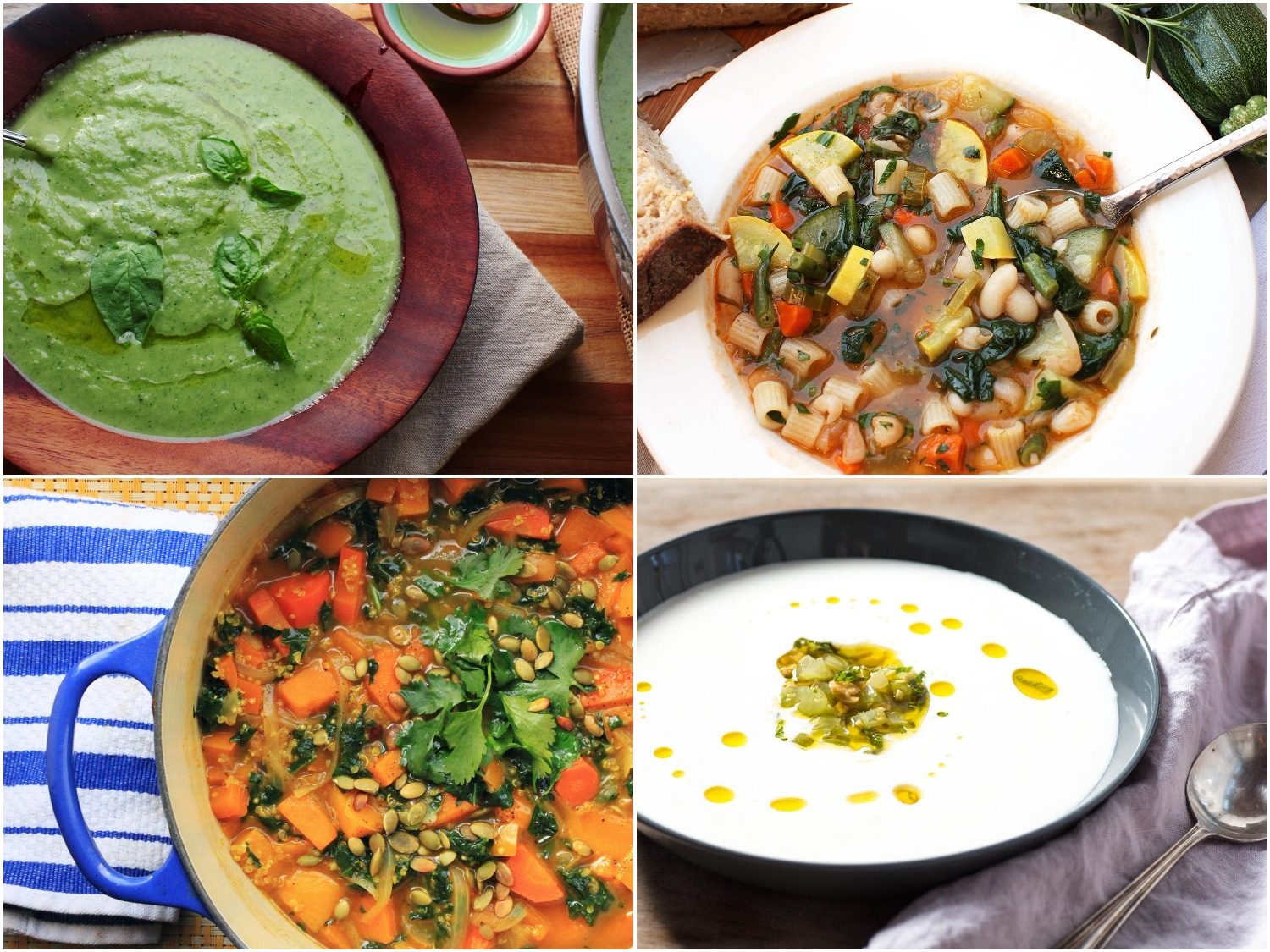 As much as I love a bowl of beef stew or broccoli cheese soup, you don’t need meat or dairy to make a fantastic pot of soup. Limiting yourself to plant-based ingredients is one of the best ways to give seasonal produce the respect they deserve. That means Italian ribollita packed with kale and squash in the winter, zucchini-basil soup in the spring, or an intense vegan ramen any month of the year. No matter what the weather, you’ll find the perfect recipe in our collection of 19 vegan soups and stews.

One more thing: Store-bought vegetable stock is usually mediocre at best, so we’d recommend taking the matter into your own hands with either our ultimate or quick and easy recipes. 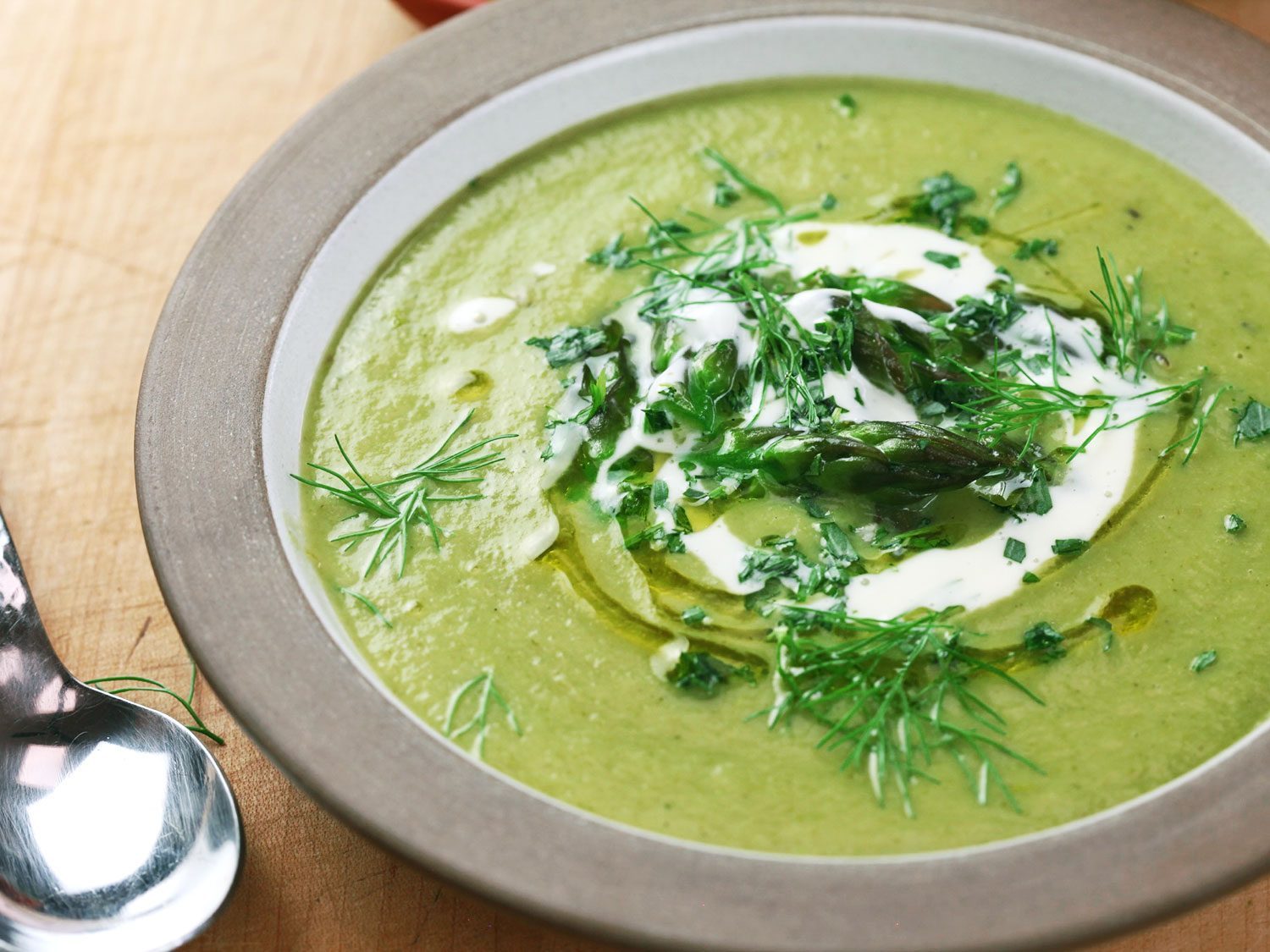 Think you need dairy to make a creamy soup? Think again. Flour not only can thicken a soup, but it also lets the flavor of good produce shine more brightly than cream. This flour-thickened soup, or velouté, is made with asparagus, leek, and tarragon. As you’re simmering the asparagus, be sure to save a few tips to garnish each bowl. 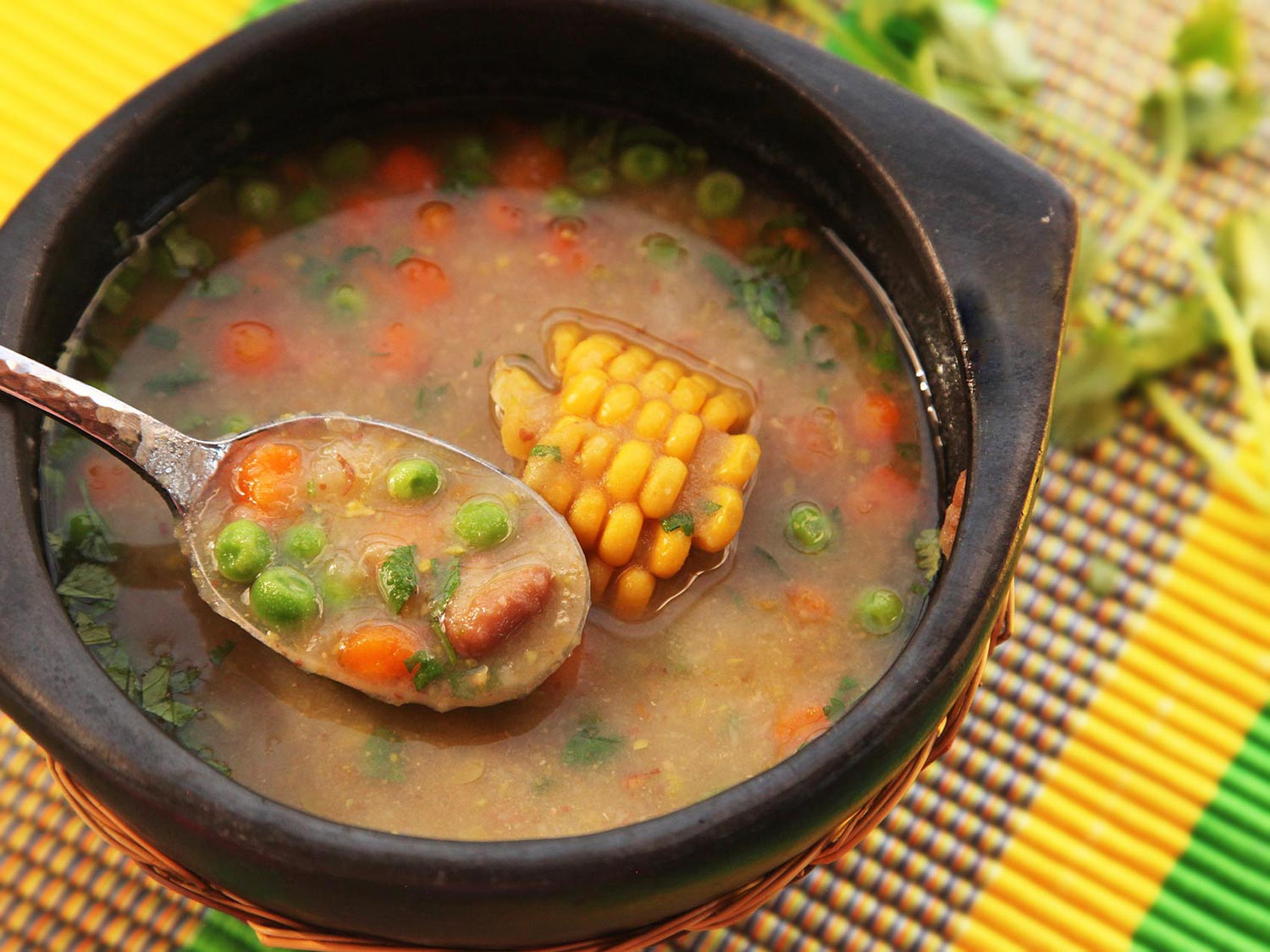 Potatoes are another great way to give vegan soups extra body—they release enough starch as they cook to thicken this version of the Colombian soup ajiaco. This easy recipe requires barely any work beyond chopping the vegetables—just dump the carrots, corn, peas, fava beans, and potatoes into a pressure cooker with broth, cook 15 minutes, then mash the veggies and add fresh peas and favas. 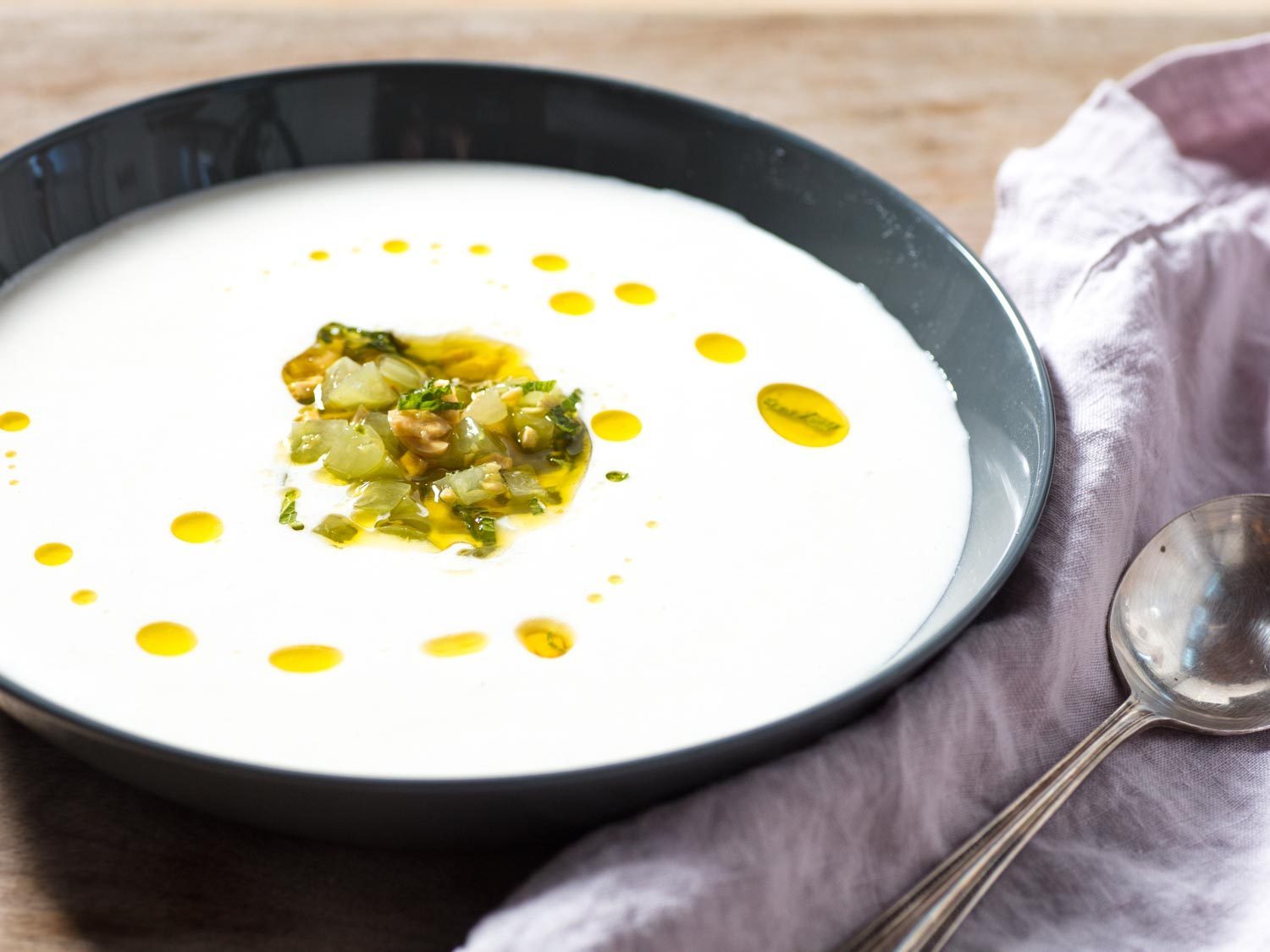 Gazpacho gets all the love, but it’s not Spain’s only chilled soup. Sometimes called white gazpacho, ajo blanco is made with bread, just like its more famous cousin. To that we add garlic, olive oil, and vinegar. The most important ingredient, though, is almonds—as you blend everything they release their milk and make the soup wonderfully creamy. 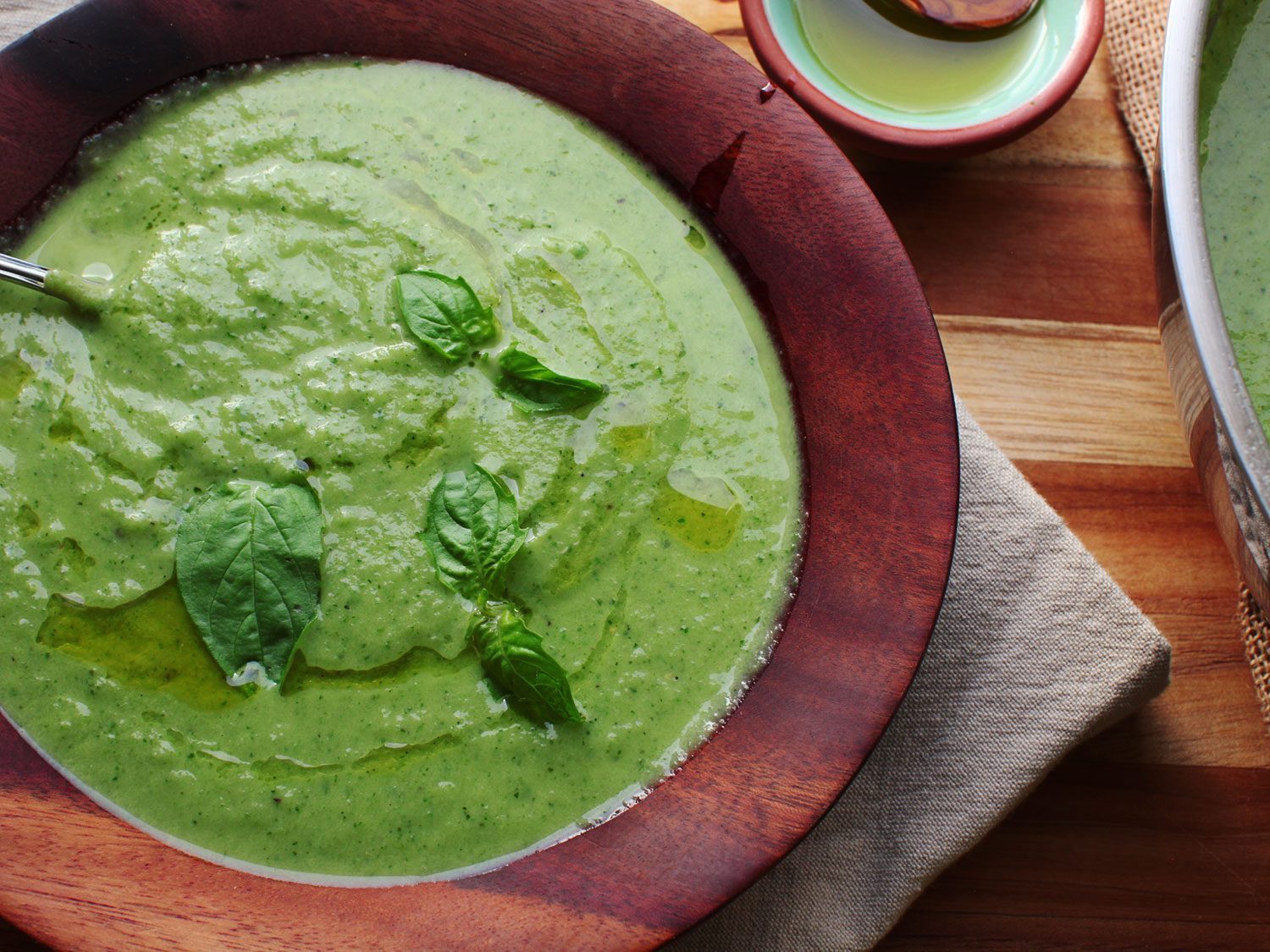 Anyone who has grown zucchini knows that it absolutely takes over in the summer. Zucchini bread is the classic way to work through a massive harvest, but if you get tired of that, then try out this summery soup. The recipe starts with squash, leek, and celery, and the addition of basil, garlic, and olive oil give it a pesto-like flavor.

Get the recipe for Easy, Summery Zucchini-Basil Soup » 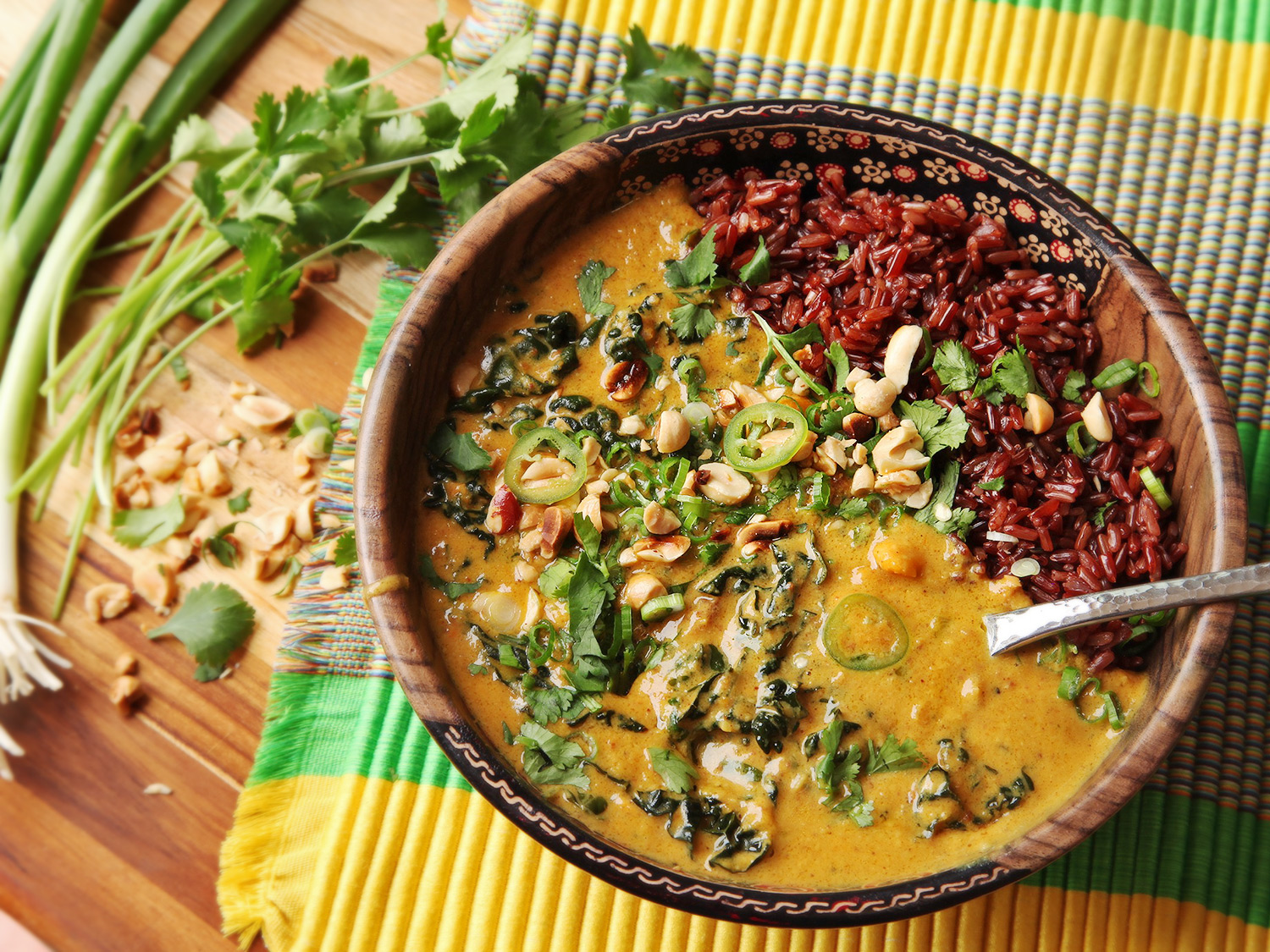 At Serious Eats we’re typically more concerned with deliciousness than authenticity. Case in point: This hearty dish is loosely based on West African peanut soup, but the coconut milk inspired us to mix things up with Thai ingredients like garlic, ginger, and chilies. While many similar recipes call for store-bought peanut butter, we give our soup a more complex flavor by toasting whole peanuts and grinding them by hand with a mortar and pestle.

Get the recipe for Vegan Peanut, Sweet Potato, and Kale Soup With Coconut » 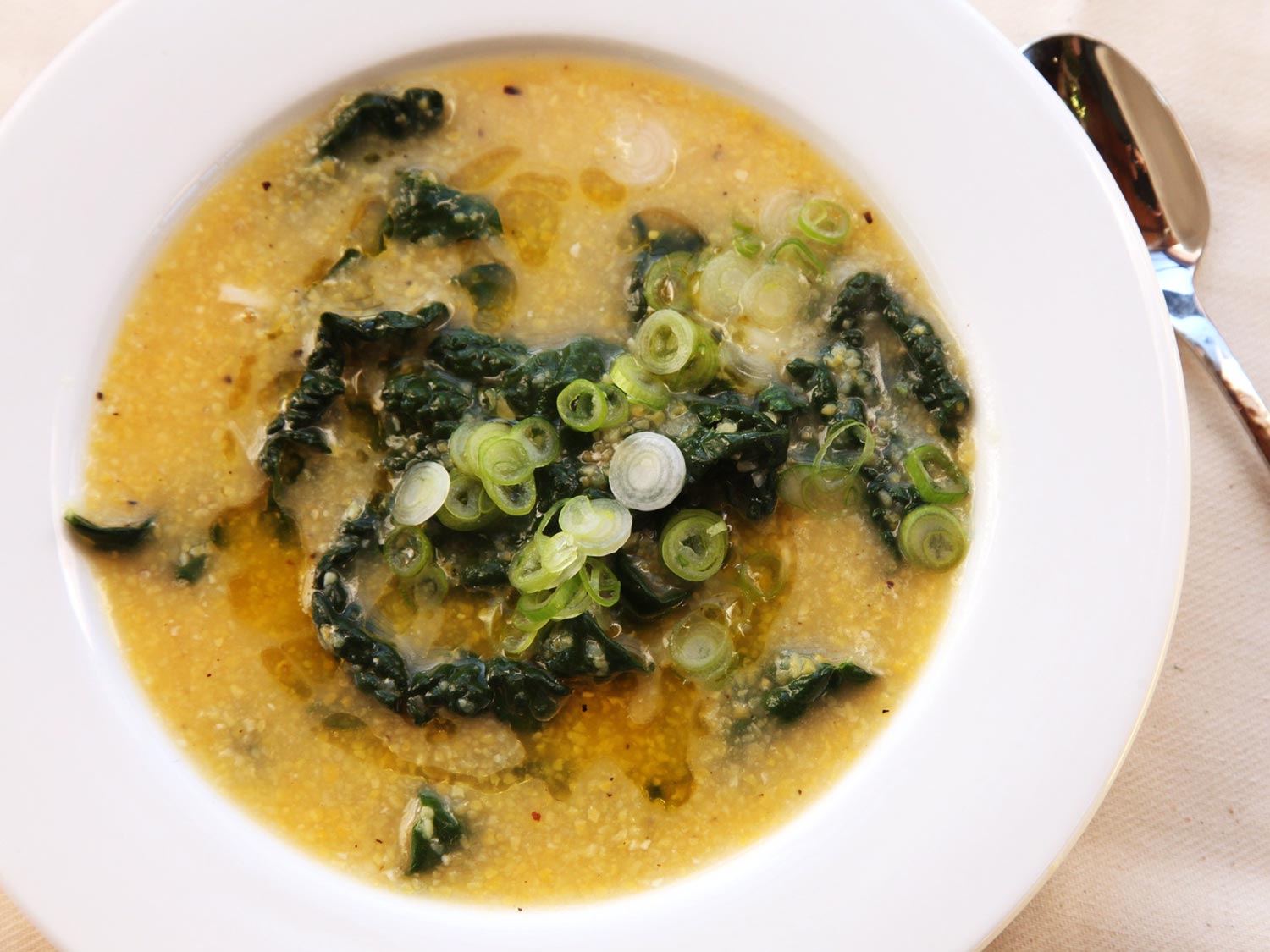 While we’re throwing tradition to the wind, check out this polenta and kale soup that replaces Parmesan cheese with other umami-rich ingredients: soy sauce and miso paste. Rather than try to hide the nontraditional ingredients we embrace the Japanese theme and top the soup with toasted sesame oil and sliced scallions. 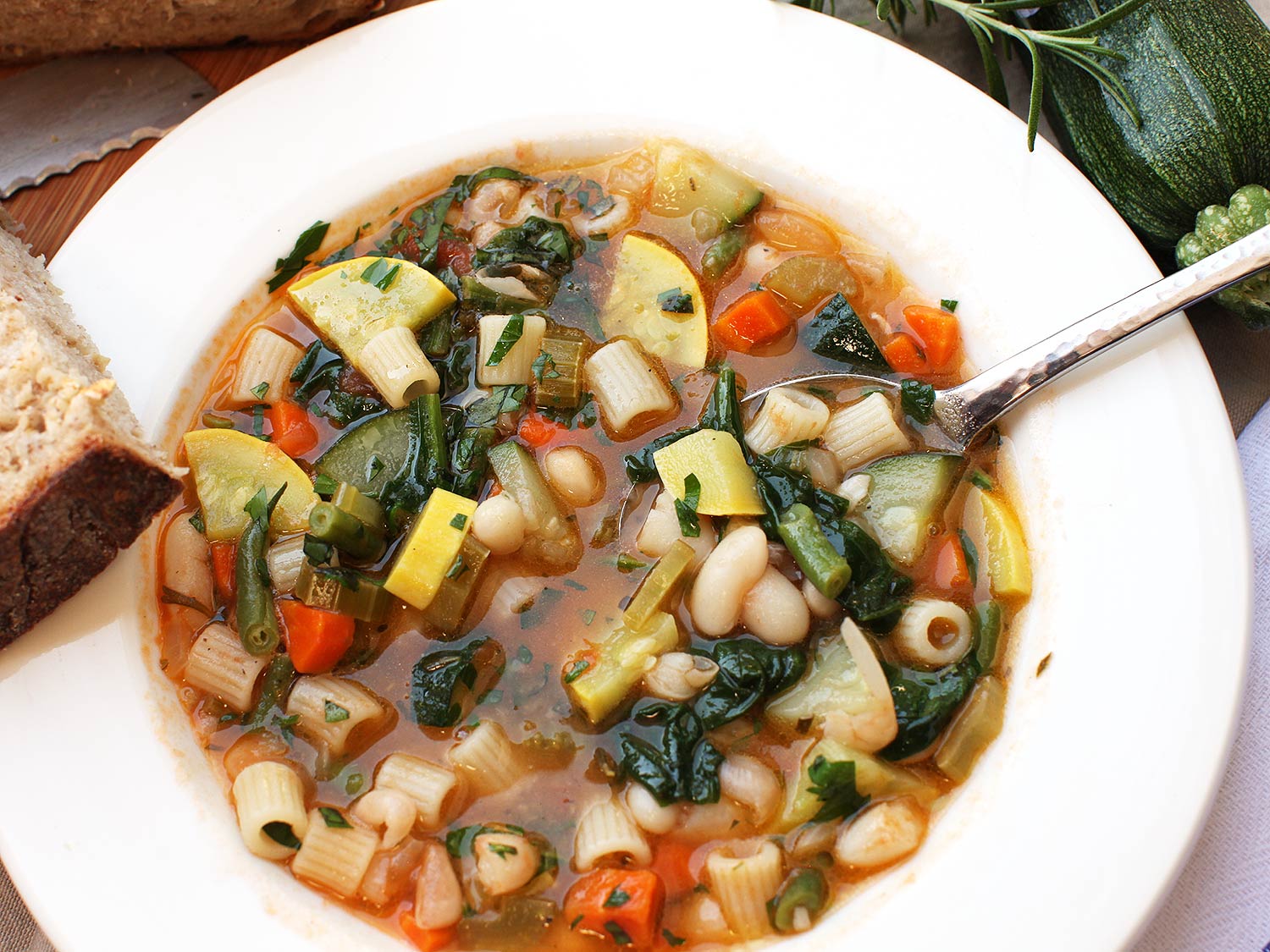 Calling this the “best” minestrone is a little bit of a misnomer—it’s more like an outline to make the best vegetable stews with whatever produce you have on hand. Beyond the vegetables, to make minestrone you need dried beans, a broth made from the bean cooking liquid, and diced aromatics.

Get the recipe for The Best Minestrone Soup » 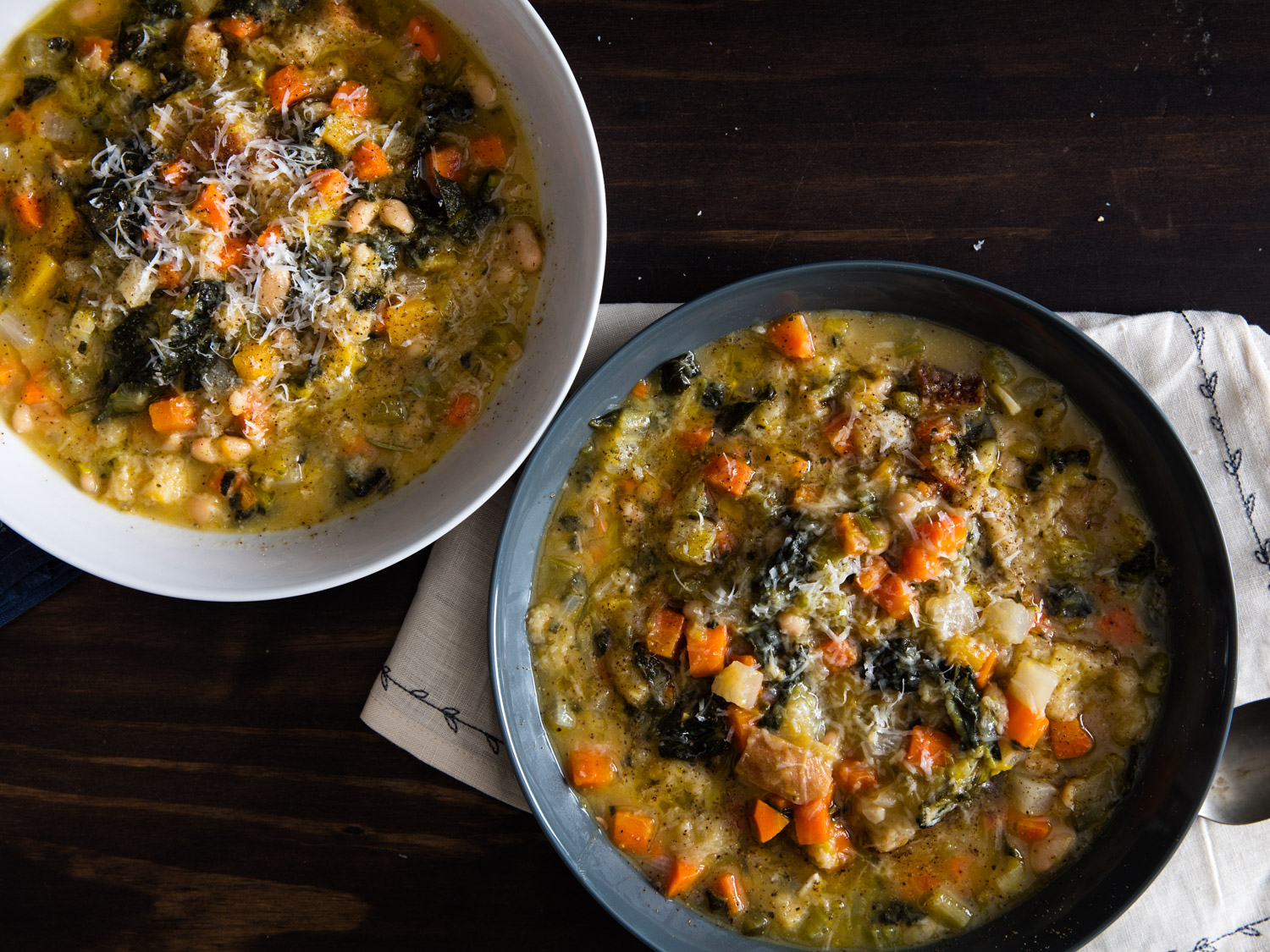 Ribollita was born when cooks started stretching leftover minestrone with beans and stale bread, but it’s tasty enough to be worth making from scratch. This recipe calls for kale, butternut squash, and turnip, but as with minestrone, use whatever produce looks good at the market or is sitting in your fridge.

Get the recipe for Ribollita (Hearty Tuscan Bean, Bread, and Vegetable Stew) » 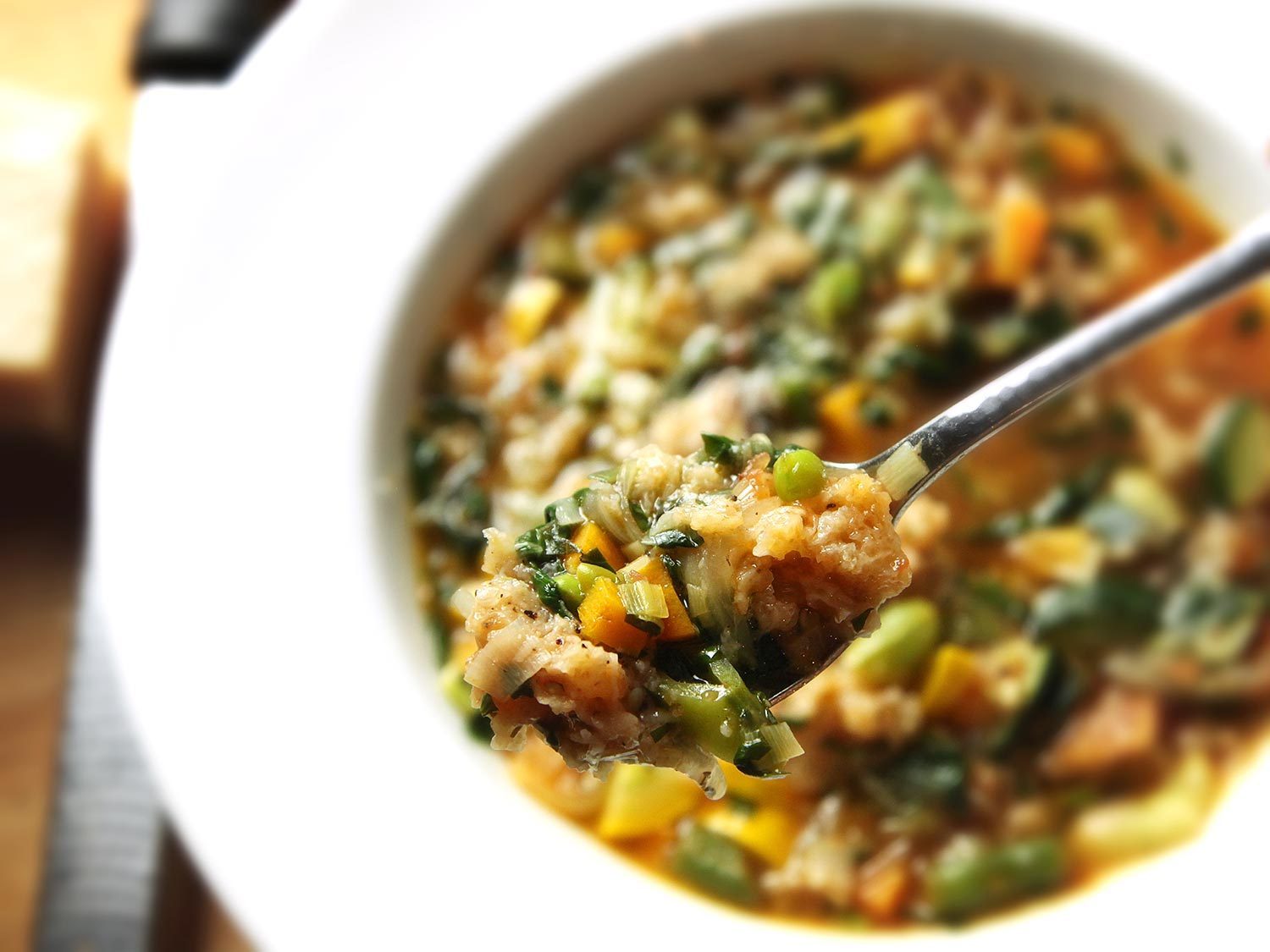 Because ribollita works with just a range of vegetables, it lends itself to pretty much every season. This summery version of the stew omits the dried beans and uses summer squash, zucchini, green beans, and spinach. One of my favorite things about ribollita is that if you keep cooking it down it will eventually condense into a sort of vegetable pancake.

Get the recipe for Tuscan Ribollita With Summer Vegetables » 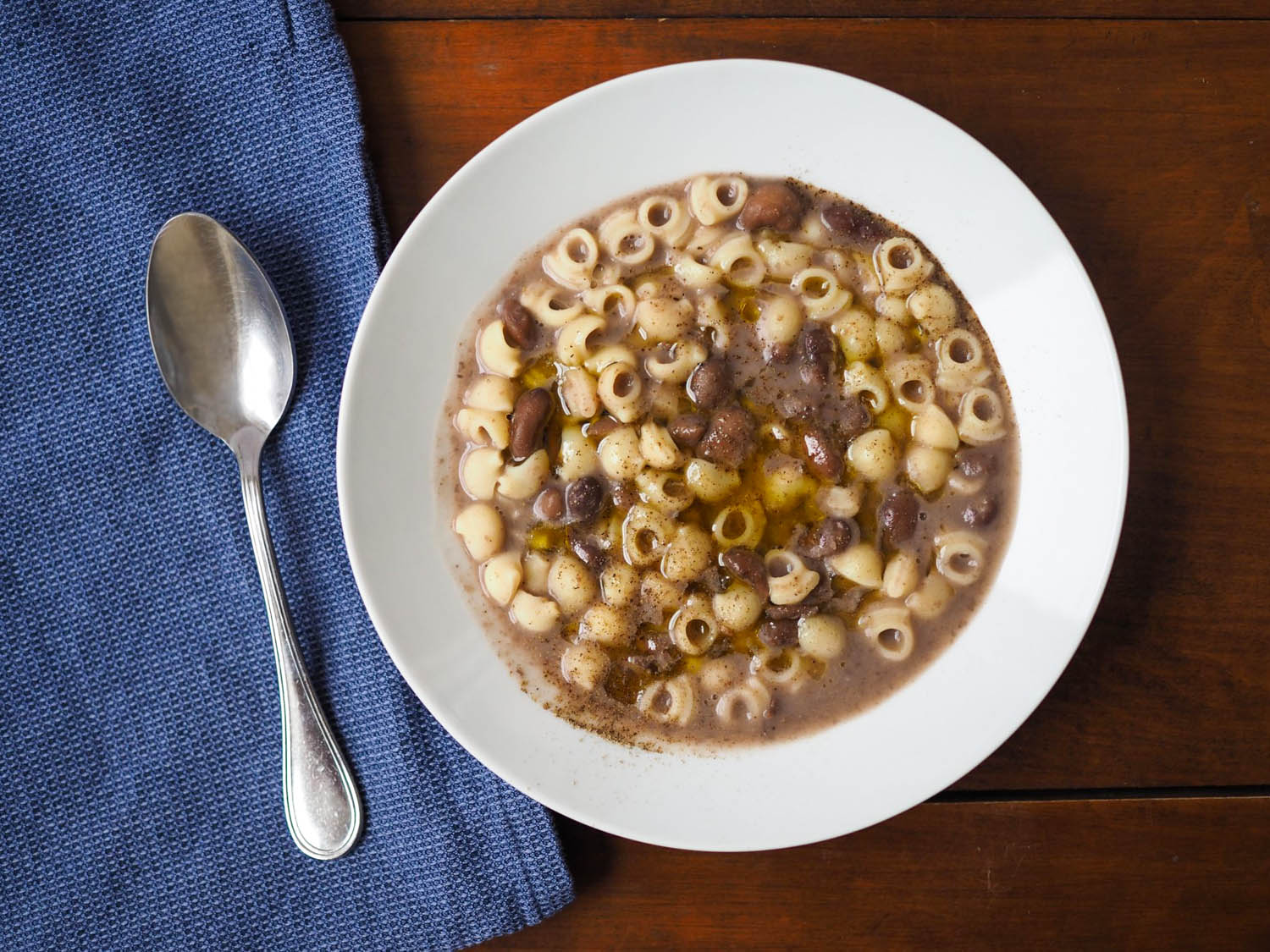 Even heartier than minestrone, pasta e fagioli is bulked up with both beans and noodles. We want the beans to shine in this vegan recipe, so we put away the can and start with good dried ones. Cook the soup until the beans seem done and then cook it some more—you want some of them to be overcooked so that they fall apart and thicken the soup. 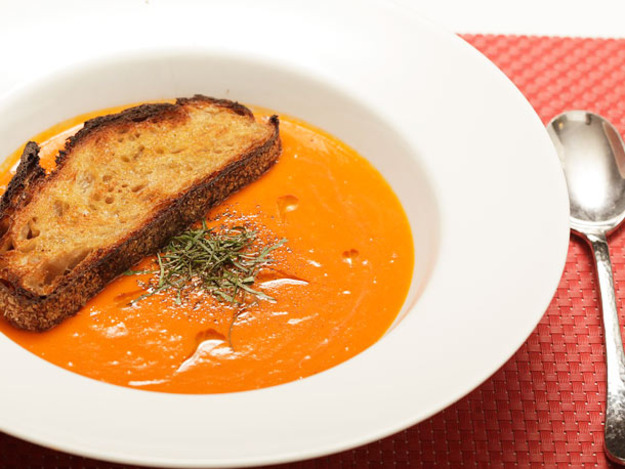 To make a creamy, dairy-free tomato soup in just 15 minutes we turn to gazpacho for guidance and use bread as a thickener. Even better, since the recipe calls for canned tomatoes, you can make this soup any time of year. If you somehow don’t have time for a 15-minute recipe, you can make this one in just five minutes with a high-powered blender.

Get the recipe for 15-Minute Creamy Tomato Soup » 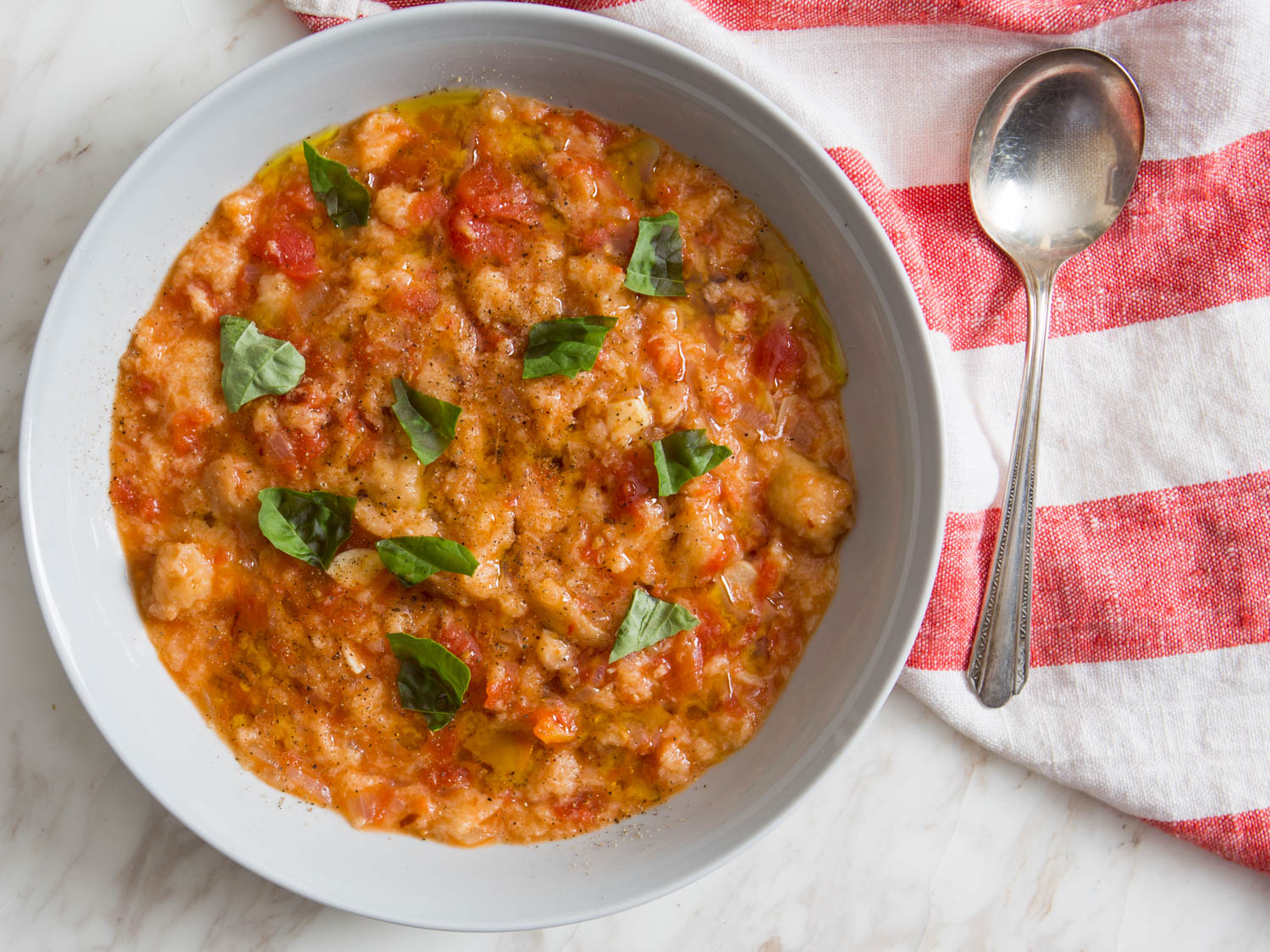 This Tuscan soup is similar in flavor to gazpacho, but since it’s cooked, feel free to use canned tomatoes. The heat has another benefit, too—stale, dry, and fresh bread all wind up about the same when you cook them, so you can use whatever you have on hand. 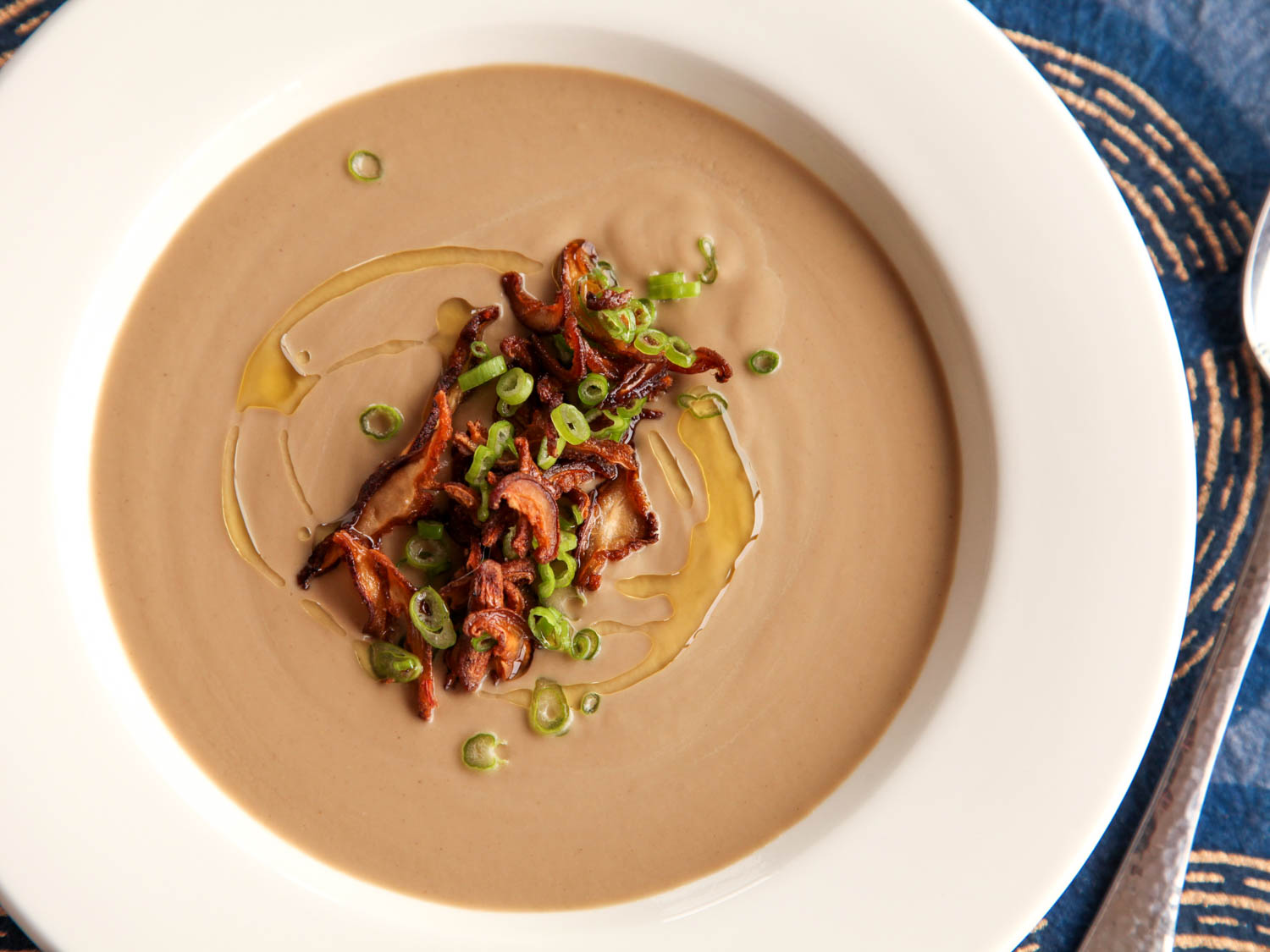 Bread is good for thickening more than just tomato soups—it’s also the secret to our vegan cream of mushroom. As with other vegan vegetable soups, by cutting out the dairy you can really let the flavors of the mushrooms come through. The uniformly smooth texture of creamy soups can be a little boring, so we top this one with crunchy fried shiitake chips. 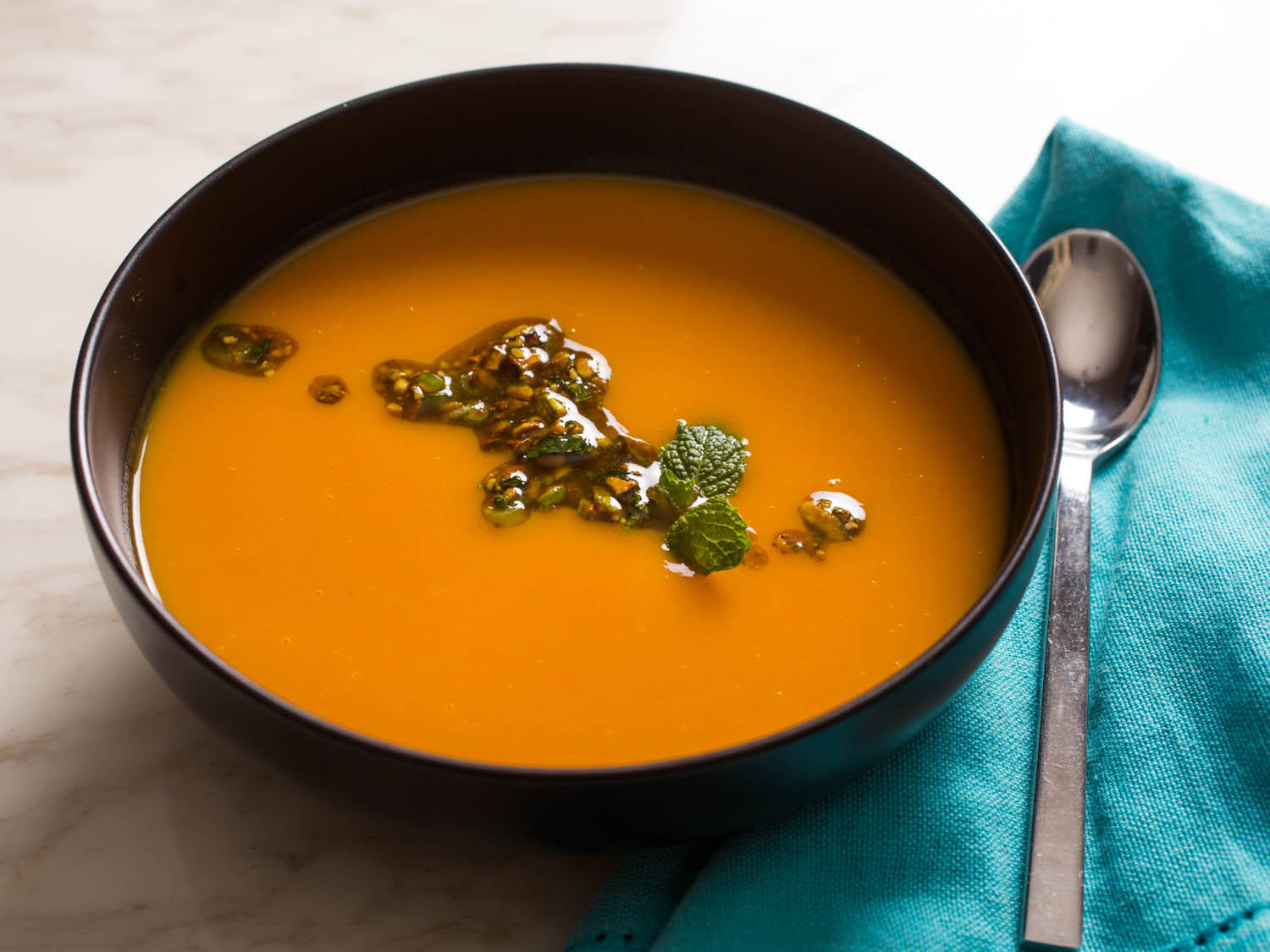 Roasting the sweet potatoes before adding them to this soup might seem like a waste of time, but it’s the best way to bring out the natural sugar in the spuds. Take the time to get the potatoes nice and sweet, then blend them up with sautéed aromatics, broth, and orange juice and serve with a garnish of pistachios, scallions, orange zest, mint, and cayenne.

Get the recipe for Roasted Sweet Potato Soup With Pistachio, Orange, and Mint Salsa » 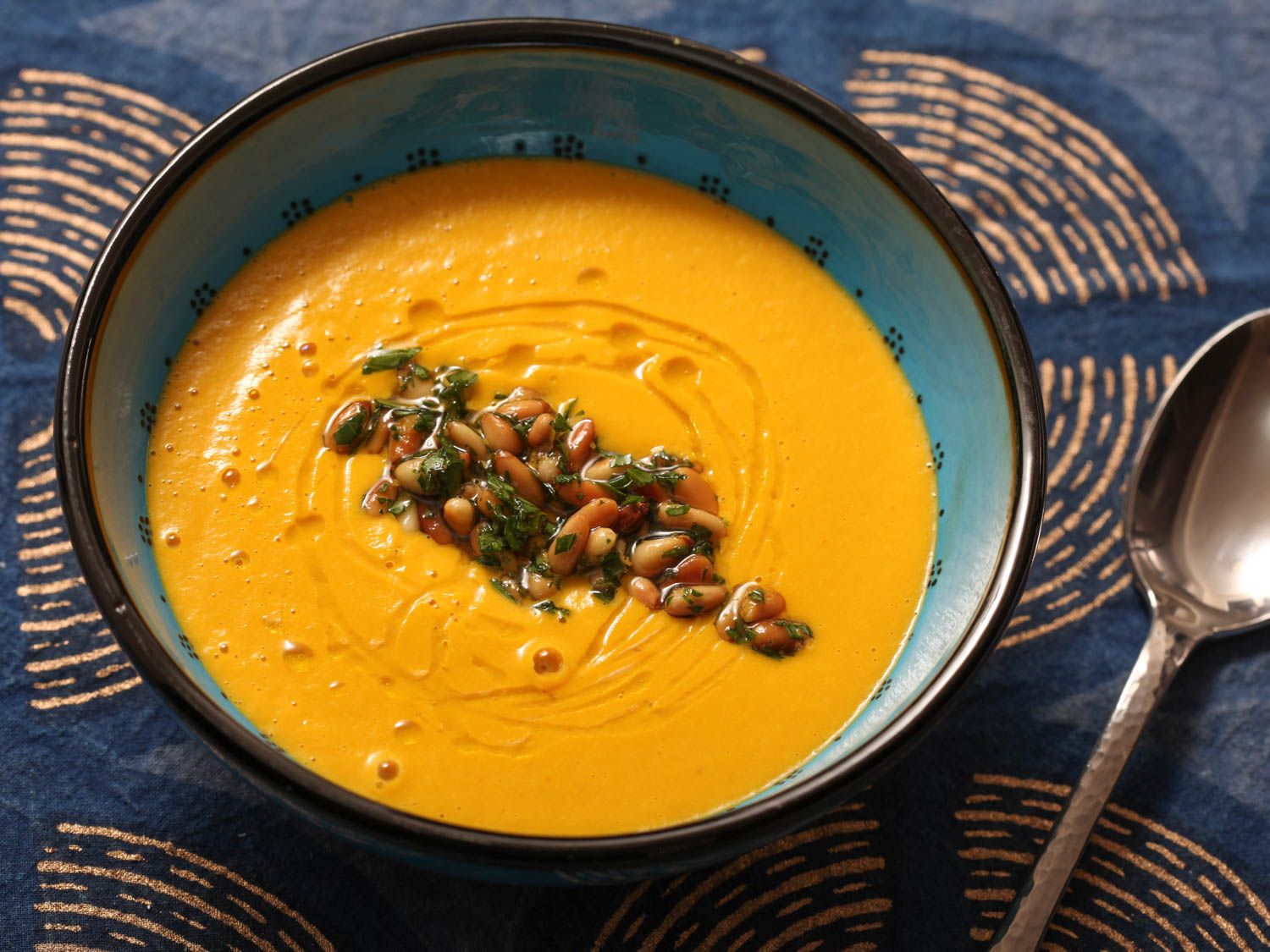 This recipe is less about the specific ingredients (though we do love the combination of carrots, harissa, and ginger) and more about the technique—follow a simple eight-step process and you’ll be able to make a creamy vegetable soup with whatever flavors you’re in the mood for.

Get the recipe for Spicy Carrot and Ginger Soup With Harissa » 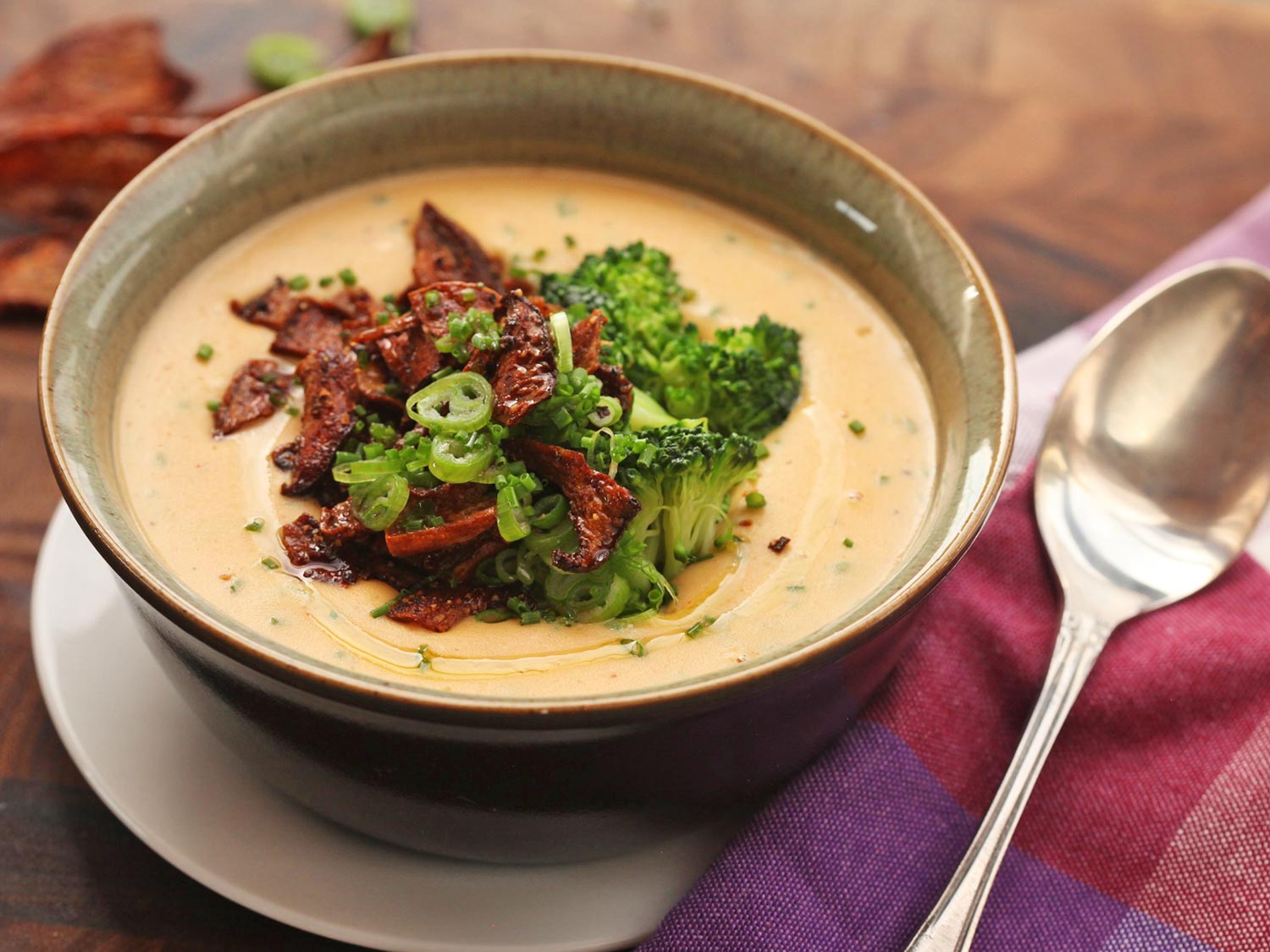 A soup dominated by cheese and bacon seems like a strange choice for vegan-ification, but we’re not ones to back away from a challenge. As it turns out, it was easy to make a vegan baked potato soup because we already have all the the tools necessary: vegan nacho cheese made with cashews, almond milk, vegetable shortening, and potatoes and smokey mushroom “bacon.”

Get the recipe for Fully Loaded Vegan Baked Potato Soup » 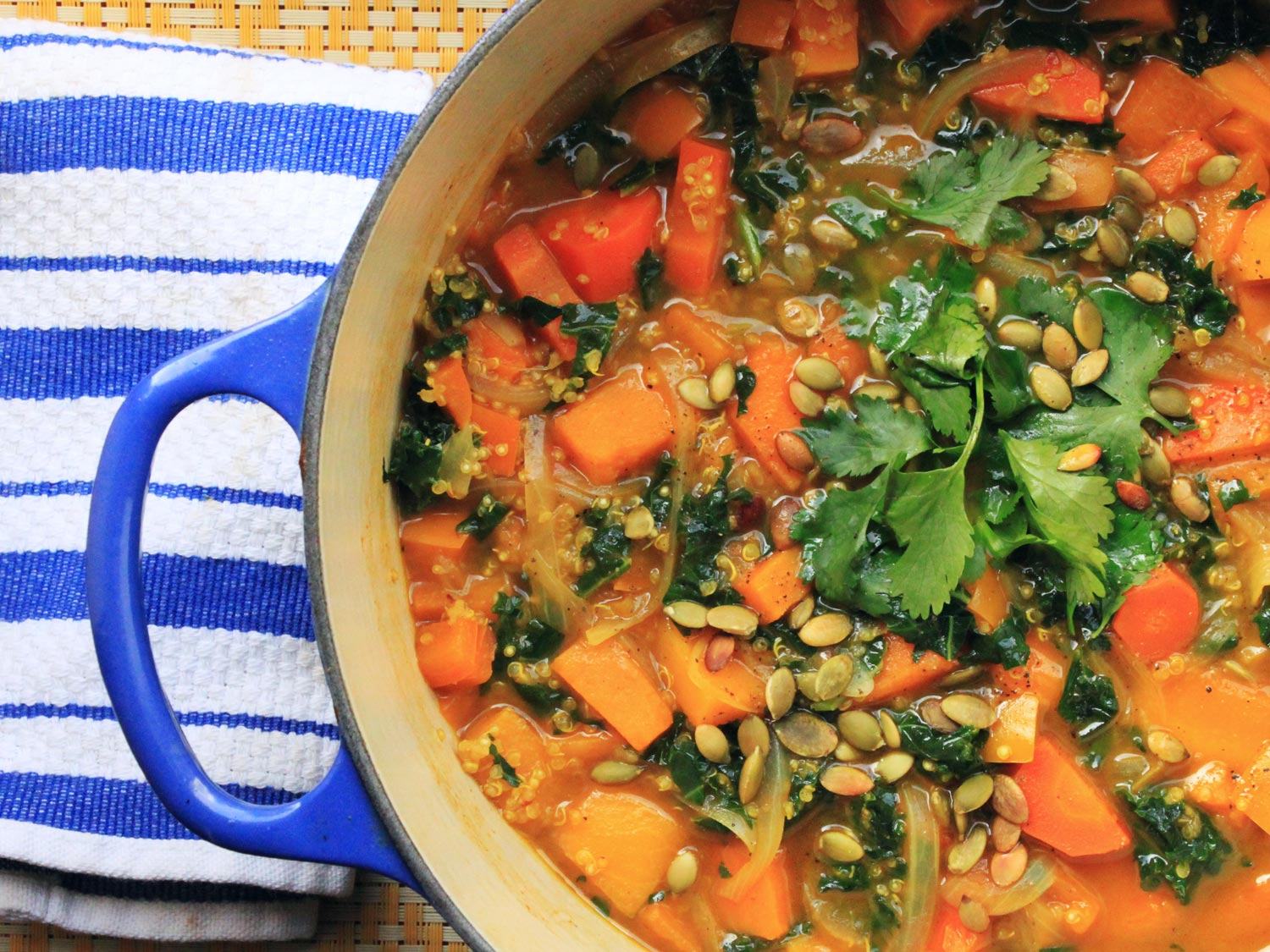 I know not everyone wants their vegan foods to mimic meat or dairy. For a meal that’s all about plants, check out this soup made with squash, kale, and quinoa. We use a generous helping of curry powder to give the veggies extra flavor and finish the soup with cilantro and toasted pepitas.

Get the recipe for Vegan Curry Butternut Squash Soup With Kale » 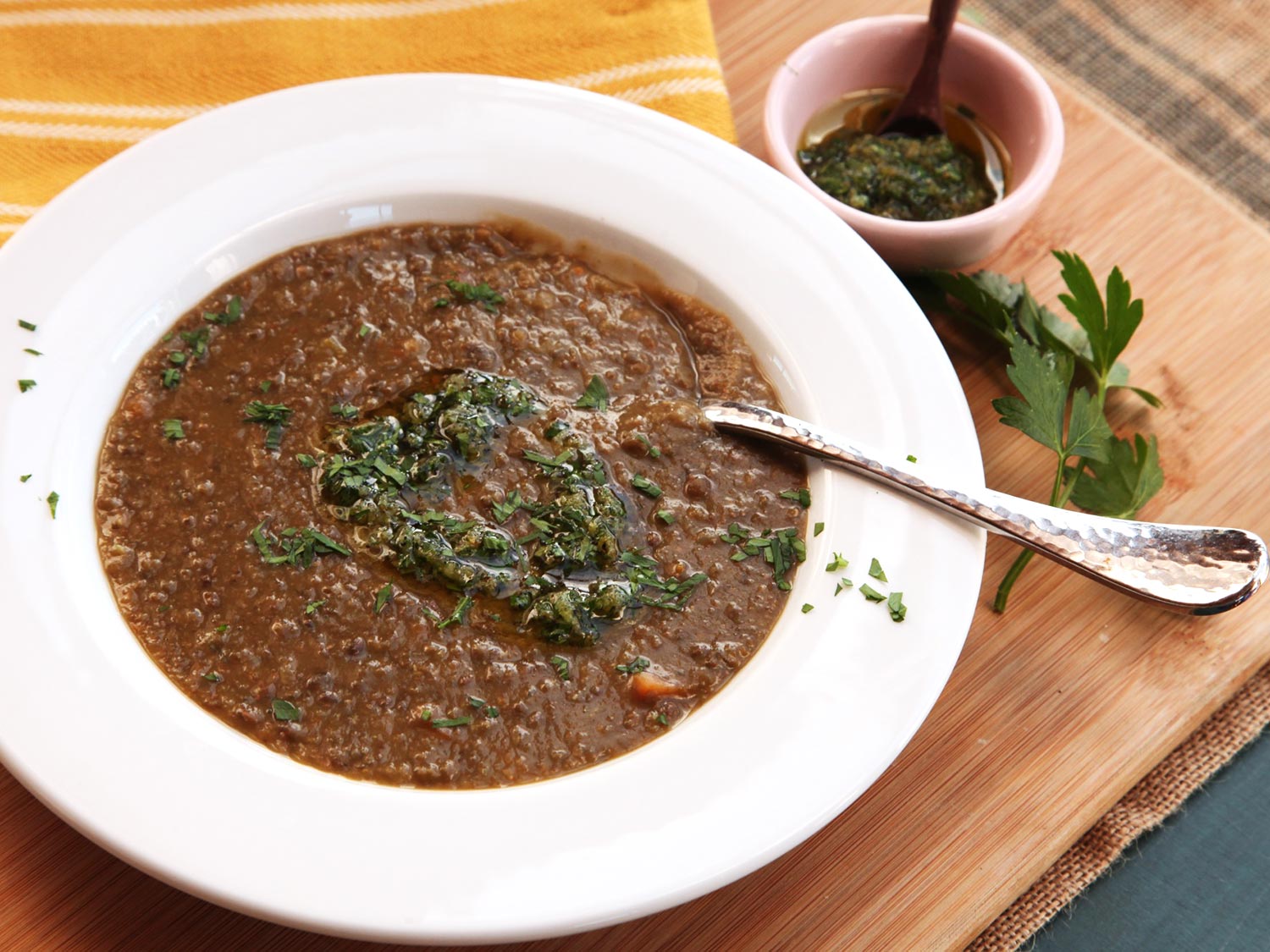 I’ll be honest—while I like the hearty texture of lentil soup, I often find that the flavor is…lacking. This version, though, is anything but bland, thanks to gremolata, a flavorful mix of parsley, lemon zest, and garlic.

Get the recipe for Easy Lentil Soup With Lemon Zest, Garlic, and Parsley » 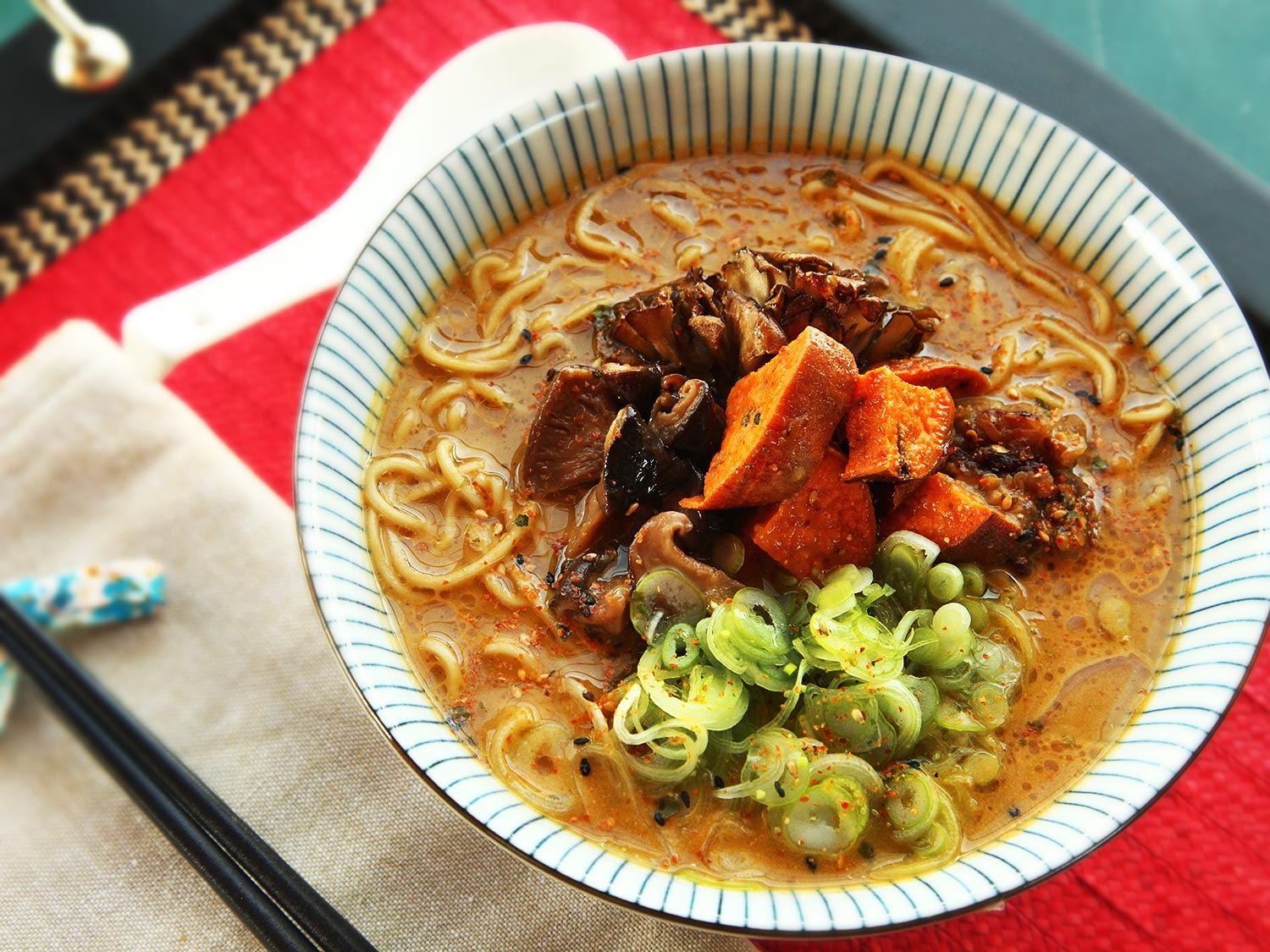 It’s not easy for vegan ramen to go toe-to-toe with pork-studded tonkotsu, but we think that this recipe can hold its own. We might have gone a little overboard, though—the broth is made with fresh and charred vegetables, fresh and dried mushrooms, and a shiitake-based tare, and we top the ramen with charred eggplant, roasted sweet potato, and roasted and simmered mushrooms.